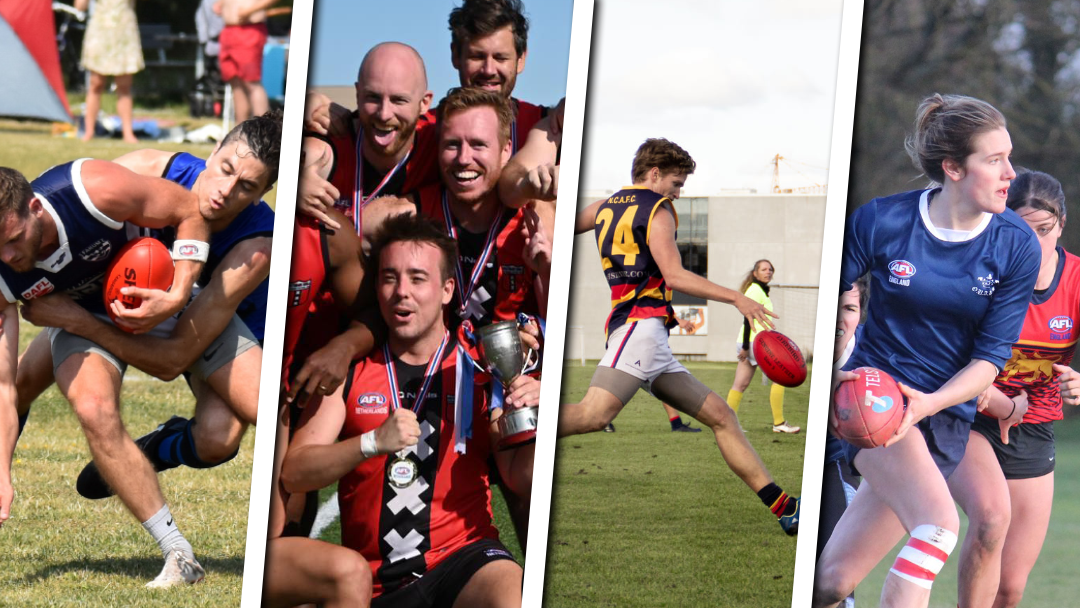 ALL Australian Football league’s around Europe were dealt with some sort of disruption this year, but it did not deny the passion or persistence of all players to get some games played, where they could.

Unfortunately for England, Finland, Germany, Norway, Scotland and Wales, they had to make the tough decision of cancelling their 2020 seasons.

This meant celebrations for AFL London’s 30th Anniversary have been postponed until next year, although teams in England still managed to get games underway in the University League, as well as a few participating in AFL Europe’s Fitzpatrick Cup (February), and Cardiff’s inaugural Dragon Cup (March). 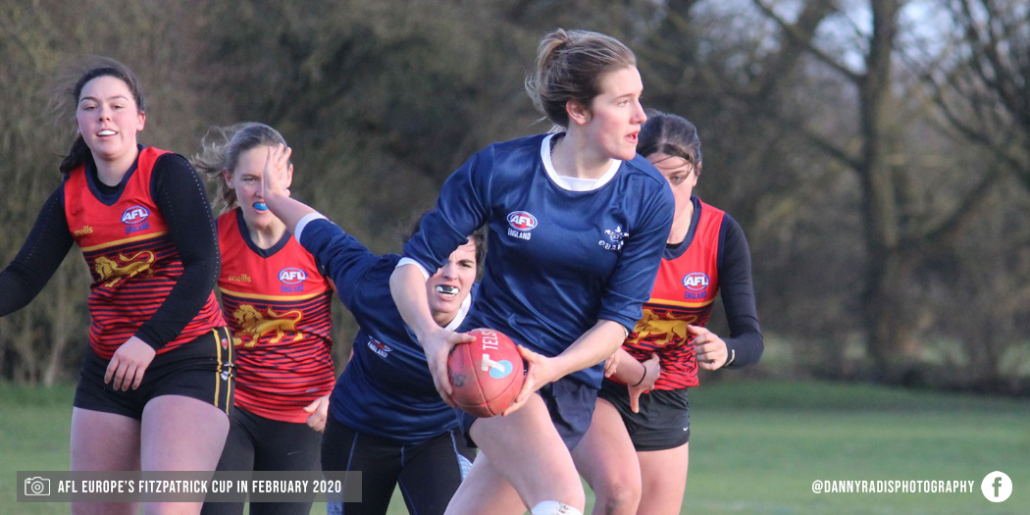 AFL Scotland did not participate in the Dragon Cup but did have teams travel to Belfast in March to compete in the Leprechaun Cup. What started as a few small pre-season friendly matches in Belfast, the Leprechaun Cup now brings together almost ten men’s and women’s clubs from England, Ireland, Scotland and the Netherlands.

Along with AFL Wales and AFL Norway, AFL Scotland spent most of 2020 without matches played, however, kept their spirits high and participated in AFL Europe’s Race to the MCG in summer. All three countries are eager to get back into the swing of things next year, including Scotland and Wales participating in the Euro Cup to be held in Stirling.

AFL Finland, AFL Germany and AFL Poland all participated in AFL Europe’s Festival of Football this year and also organised their own, one-day tournaments where they could. 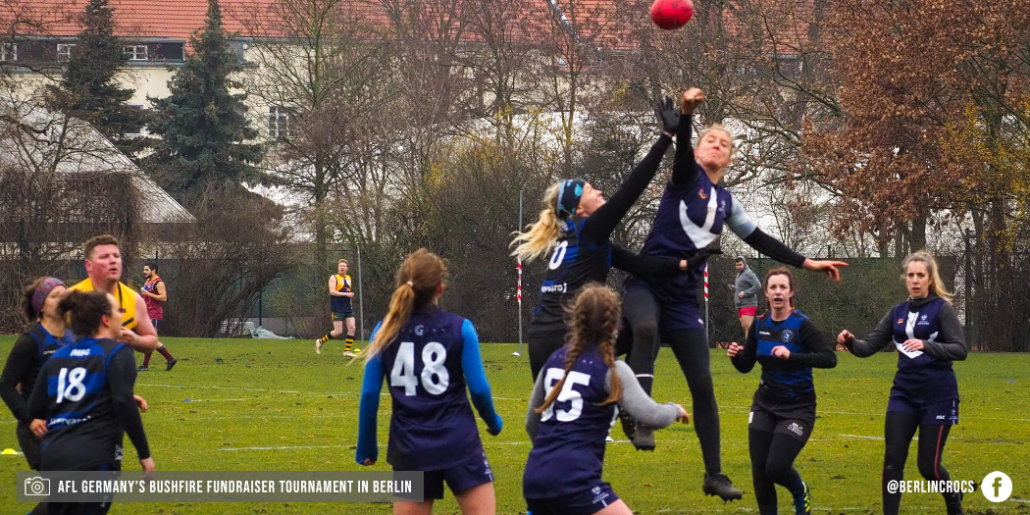 One tournament in particular was Germany’s Bushfires Fundraiser in March, with teams from Germany, Poland, Sweden and Denmark travelling to Berlin to take part.

All three countries of Finland, Germany and Poland would welcome new teams to their leagues this year too.

Finland welcomed the Uusimaa Kangaroos just weeks prior to the Festival of Football, while Germany saw three teams in the Heidelberg Knights, Kiel Koalas and Leipzig Quokkas form around the country.

Poland in the past 12 months have gone from 15-20 players in the city of Warsaw, to now 40+ players and four local teams across the country, as well as the foundations of a fifth team.

AFL Hungary‘s only team in Budapest experienced growth from just three players to more than ten and were excited to make their debut in Austria’s Festival of Football tournament, but unfortunately had to withdraw due to new travelling restrictions. Meanwhile, AFL Bulgaria’s efforts to take part in the festival saw them make history in playing their first all-Bulgarian AFL match. 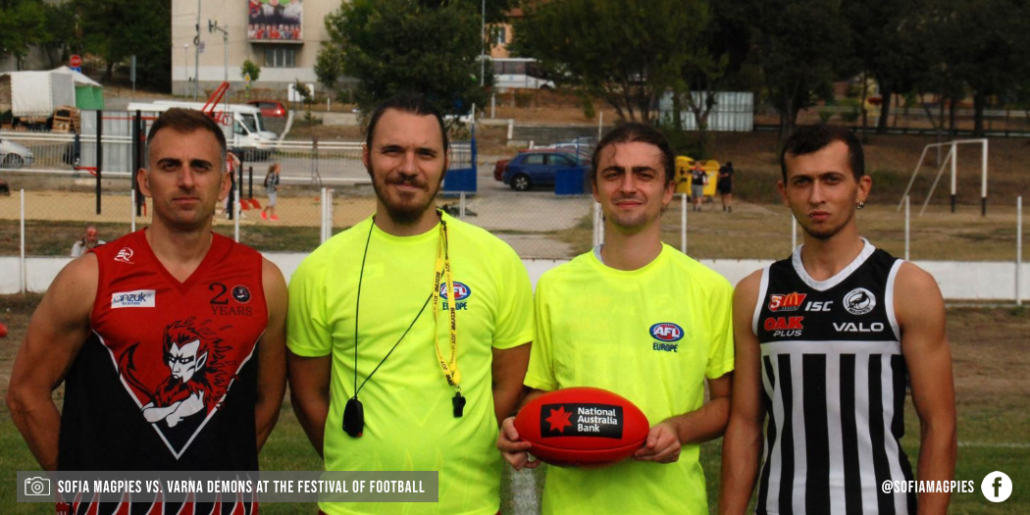 Many countries this year had also started their league’s prior to lockdown cancellations, as well as postponing their fixtures to later dates.

AFL Austria’s Styrian DownUnderDogs and the Vienna Galahs went head-to-head a couple of times through the year, as well as mixing teams when they participated in the Festival of Football in September.

From June to August, Association of Australian Football Croatia (AAFC) featured three rounds in the women’s competition and four in the men’s.

The teams in Croatia, having a bit more time than usual, were also able to finish off their 18-a-side pitch in Zagreb, now ready to welcome visiting teams next year.

AFL Israel and the Tel Aviv Cheetahs hit the ground running to start the year, preparing for the Euro Cup that was planned to take place in June.

Training that had started in February became interrupted with Israel imposing quite strict lockdowns in March.

The Cheetahs went on to hold three ‘game days’ from July to September. 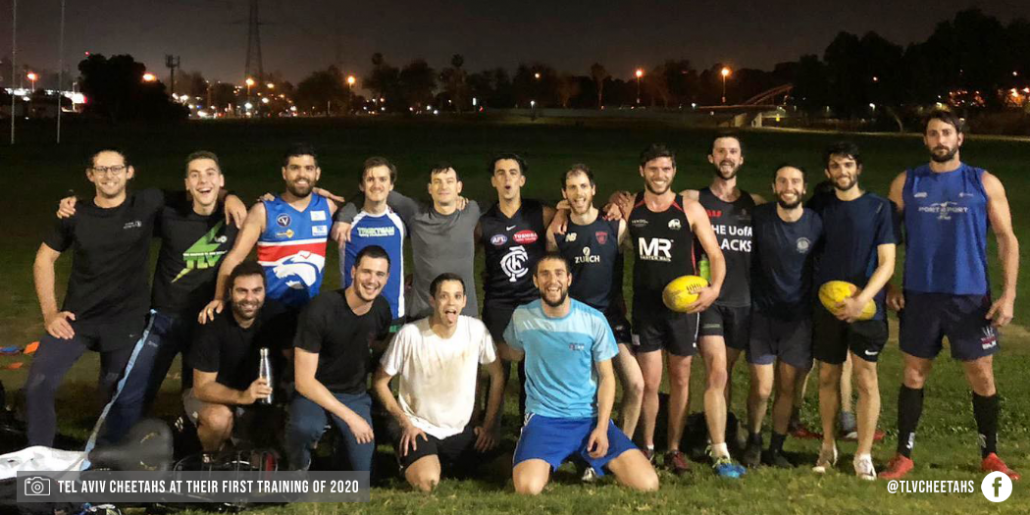 AFL Ireland managed to play games before and after Ireland’s most strict government guidelines. Earlier on in the year and down in Cork, they played the Leeside League which included a number of games between the Leeside Lions, UCC and CIT Universities. Belfast organised something similar and created a couple of new teams to play against the Redbacks.

The men’s league managed to get underway in mid-July and play four rounds, however, the women’s league for 2020 was cancelled.

AFL France run their season opposite to the majority of Europe, starting their season in Europe’s winter. The end of the 2019/2020 season was therefore cancelled in spring, with the 2020/21 season starting in October.

It was the first time in French footy history that they had ten main clubs involved in the league, but just weeks after launching, France had to put the season on hold. AFL France hope to resume the season from February 2021. 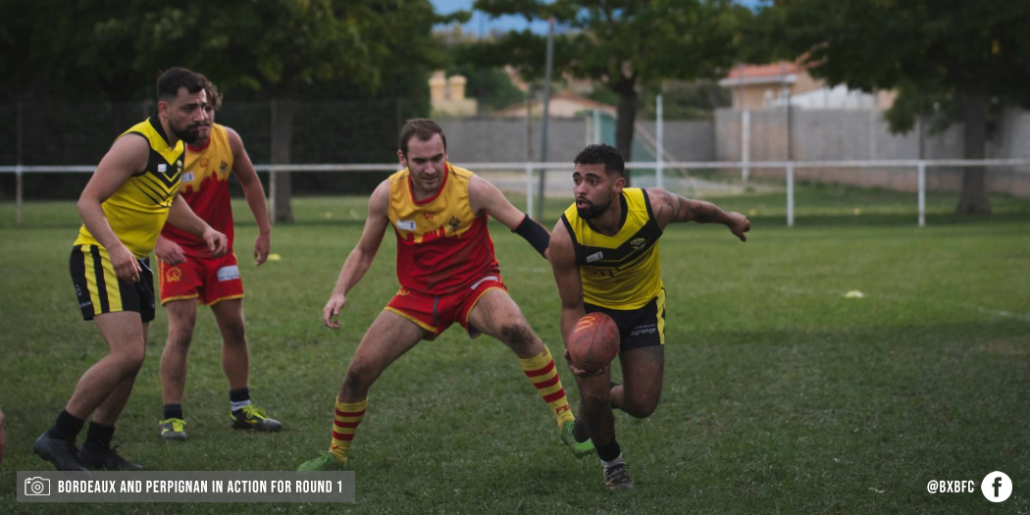 This year the Gallia Cup included teams from Germany and the Netherlands to compete in a three-match series which would determine the winner of the tournament. The day coincided with the launch of the Western European Women’s League (WEWL) and their first tournament.

AFL Czech Republic were also involved in the Gallia Cup, with the Prague Dragons sending over three of their own to join forces with the girls from Amsterdam.

The Dragons played their first game of the year in the AFL Czech Cup in July, and also travelled to Vienna (July) and Dresden (August) for international friendlies.

AFL Sweden had quite the successful year that included running their annual Swedish Cup, as well as launching the South Sweden Australian Football League, with the cooperation from some local GAA teams. 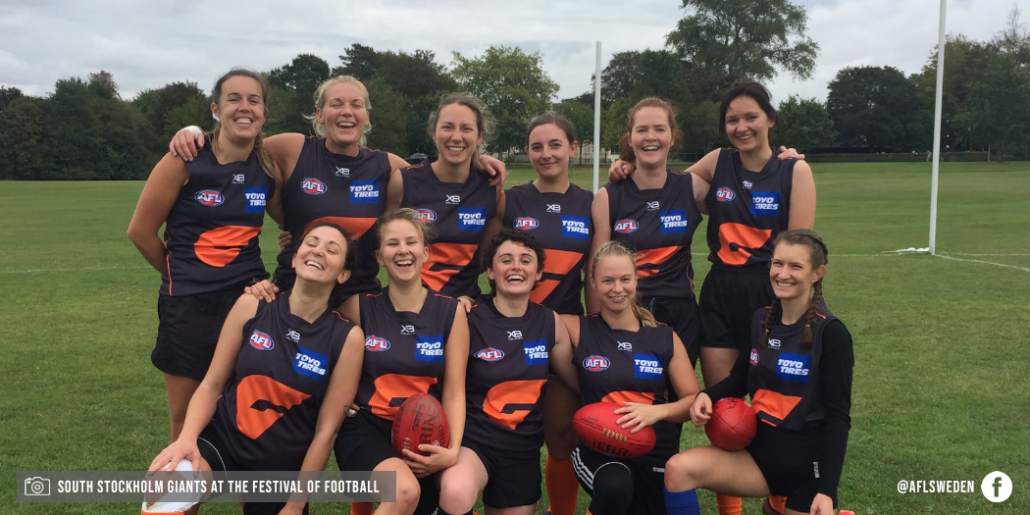 AFL Switzerland had originally planned a five-round season with four teams to begin in June. This was cancelled and postponed to start in August, which then featured three rounds with three teams, as well as two reserves teams.

The Zurich Giants and Geneva Jets were the two teams to make it through to the grand final, in which the Jets were victorious.

Denmark had a great season with the return of two clubs as well as the involvement of Port Malmö from Sweden, as mentioned earlier. 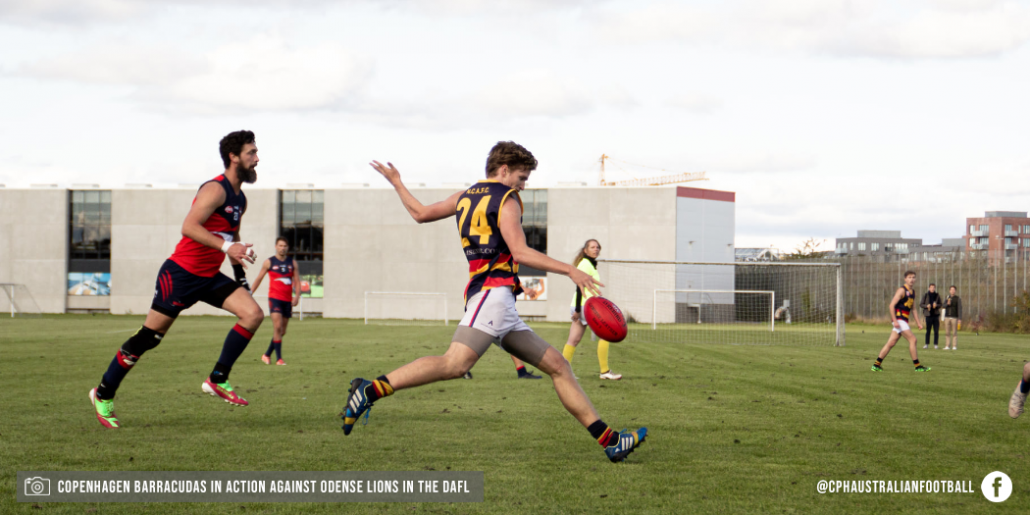 Six teams participated in the 2020 DAFL season that held six matches and lasted right up until the morning of the grand final, in which the tough decision to cancel was made, due to the country’s rising number of infections.

Set to play in the grand final were the Copenhagen Barracudas, who remained undefeated throughout the season, and the Farum Cats, who were dealt with just the one loss.

It was the first time with the three teams where there were no ‘transfers’ of players between each club to level out playing numbers, as Amsterdam would go on to win the grand final held in mid-September. 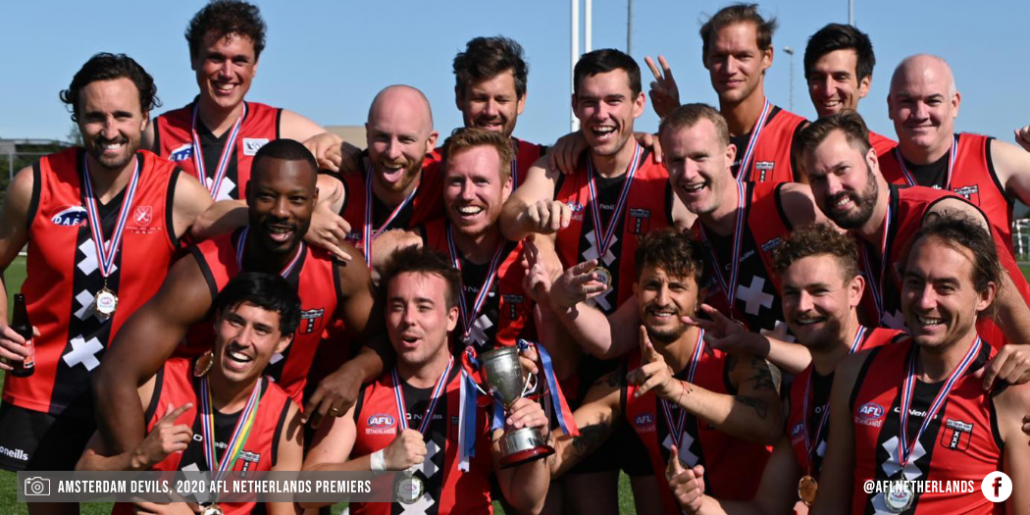 The Netherlands had growth in the number of women playing Australian Football in the country too, who travelled to Paris earlier in the year to participate in the first round of the WEWL.

AFL Russia played an eight round season in St. Petersburg between the Baltic Hawks and Northern Tigers. The Tigers dominated all season, as the Hawks gave it their all in the final game in September to lose by just ten points, 73-83.

Off the field, the guys in Russia developed a new mobile app to keep track of games played as well as player and team stats.

And there you have it, a brief summary of what each country was able to get up to in 2020.

We’re looking forward to seeing each of our participating countries bounce back into their regular fixtures in 2021, and will hopefully see you all at AFL Europe’s 2021 events. More information on those to be released in the new year.