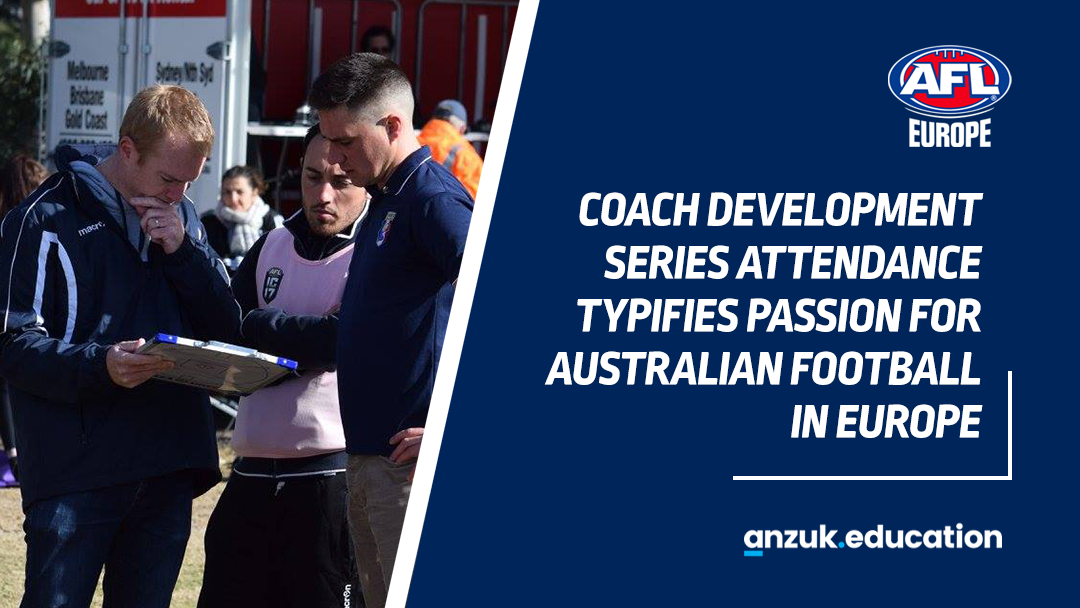 AFL Europe are pleased to share that this year’s online Coach Development Series with anzuk Education was attended by just over 300 club representatives from 27 different countries across the world.

Huge credit goes to the AFL Europe community, and the 113 local footy clubs that were represented in at least one of the sessions, for the level of passion and engagement that was shown throughout the series.

The Coach Development Series covers a wide range of topics and is designed to develop all current and aspiring Australian Football coaches. Throughout the series, we were fortunate to be joined by eight elite coaches and leaders from the Australian sporting landscape who each offered their own time to share their knowledge and unique experiences with our coaches.

Coaches were given a few weeks off after the first four week block of the Coach Development Series to put some of their learnings into practice. The presenters who joined us in weeks five to eight were Olympic gold medallist, Michelle Mitchell OAM OLY, Coaching Content & Learning Lead at the AFL, Samuel McKenzie, Darebin Falcons VFLW Head Coach and former England Vixens Head Coach, Mitch Skelly and Brisbane Lions AFLW premiership coach, Craig Starcevich. Starcevich, who joined the series as a guest speaker for his second year in a row, presented to the topic of ‘End of Season Review’ and was once again impressed by the coaches in attendance.

“The number of coaches who have regularly attended both this year’s and last year’s series has been amazing,” said Starcevich.

“It’s great to see the tremendous amount of passion and interest that is shared for Australian Football across the world. I very much enjoyed being a part of it all again and I’d like to wish good luck to the coaches and teams in Europe who can hopefully get some games underway this year.” Ioanna Kopasaki from the Rheinland Lions in Germany is one coach who is looking forward to getting some games played this summer. Kopasaki attended all of the 2021 Coach Development Series and shared what she enjoyed most about the online program.

“The series taught me practical tools to review performance throughout the whole season and to plan for success,” said Kopasaki.

“The injury prevention session with Dr. Brooke Patterson provided helpful and practical information for a safe return to footy after the pandemic-related break, and I was absolutely thrilled about the session with Craig Starcevich!

“Having the premiership coach provide a detailed insight into the end of season review of the best team in the AFLW was a huge learning opportunity.”

Paul O’Halloran from Galway Magpies in Ireland, who also attended all of the eight-week series, said the program went beyond what he had expected.

“When you think coaching, you are inclined to imagine skills, tactics, magnetic boards and structures,” said O’Halloran.

“The series covers so much more than that. It is largely about coach empowerment and giving coaches an understanding of the entirety of the role and that particular scope is limitless.

“Each session was just 90-minutes long but could be talked about in detail for many, many hours. It has given me a taste for more and hopefully I can use what I have learned to good effect with my club in the coming years.”

AFL Europe would like to thank all coaches and club representatives who attended the series this year. We acknowledge the critical role all coaches play in the growth of the sport across the world, and hope the series provided all in attendance the tools necessary to fulfil your role as a coach with a greater level of confidence.

A special thanks to our Education Partner, anzuk Education, for supporting the Coach Development Series and enabling it to run for a second consecutive year.

Match Reports – The Leeside League, Round 1