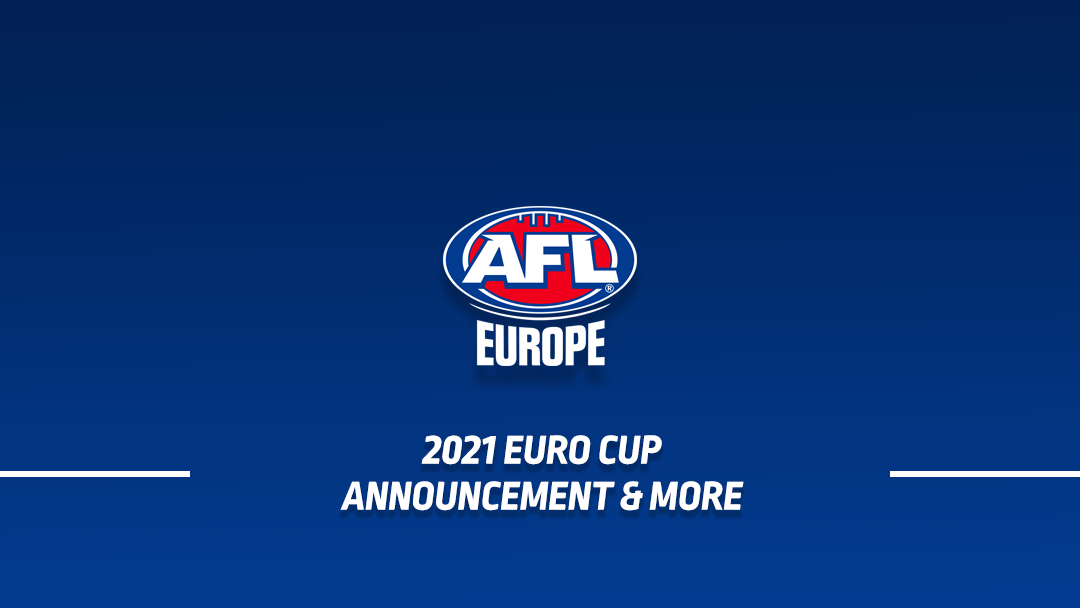 AFL Europe in conjunction with AFL Scotland have made a decision to officially postpone the 2021 Euro Cup.

The tournament, which was scheduled to take place in Stirling on the 26th of June, will now be pushed back into October 2021 to ensure we can deliver the best Euro Cup tournament possible with a high number of participating teams. This also ensures that the teams in Europe will have an opportunity to train and play in their domestic leagues for an extended period of time prior to returning to an international tournament.

The decision to postpone the event was made due to the uncertainty surrounding mass participation events, community sport and international travel that we are all still faced with.

The new date unfortunately means AFL Scotland will no longer be able to host the 2021 Euro Cup. AFL Scotland however have been granted hosting rights to the 2022 Euro Cup and look forward to hosting the event in the summer next year. We are excited to announce that AFL Netherlands will become the new hosts of the 2021 Euro Cup, which is set to take place in Amsterdam at Sport De Encharct on the 16th of October.

Whilst we have every intention of delivering this event in October, again this will only go ahead if the COVID-19 situation throughout Europe allows us to do so safely. AFL Europe will once again provide an update and a decision on the 2021 Euro Cup four months out from the event (June 18th). Those booking travel and accommodation for Amsterdam prior to this date would be encouraged to have a flexible booking.

Furthermore, with the Euro Cup being pushed back into an October timeframe, it was agreed at the AFL Europe General Assembly Meeting that the change of schedule would result in the cancellation of the 2021 Champions League which was set to take place in Amsterdam in October. Unfortunately, this now means that with the next Champions League event not taking place until 2022, the teams who had originally qualified for the 2020 Champions League will not automatically qualify to attend next year’s event.

AFL Europe apologises to those teams who originally qualified for this tournament, however as those teams won their league titles in 2019, we believe too much time has passed to hold their place in the tournament as many teams would have changed since then. We also believe that this change will add more weight to the competitions held across Europe this year.

AFL Europe would like to encourage all clubs across Europe to spend these next few months focussing on re-engaging their players, umpires and officials by delivering regular and successful training sessions and matches at a local and regional level.

By focussing on all players and clubs within your region, we will ensure that the game recovers from a challenging period. Then, providing travel and restrictions permit, we can return to international tournaments such as Euro Cup towards the end of the year. AFL Europe are excited to announce that we will once again host the Festival of Football, and are excited to see this tournament grow significantly from what we saw in 2020. We will again be supporting all countries participating in this tournament and provide the likes of footballs, medals and umpire shirts. Details on the 2021 Festival of Football will be confirmed and announced in the coming weeks.

AFL Europe again encourages all leagues and countries to focus on getting their plans in place to deliver some regular training and playing opportunities at a domestic level in 2021. The newly announced Quality Club Program is a great starting point for this so please make sure you send the relevant information (contact details and fixtures) through to AFL Europe as soon as possible and also make sure you encourage some of your players, umpires and administrators to register to the below programs as soon as possible.

AFL Europe would like to thank AFL Scotland and AFL Netherlands for their support and flexibility throughout this decision process.

We look forward to hopefully running this event in Amsterdam at the Sportpark De Eendracht complex later this year, and then teaming up with AFL Scotland to host AFL Europe’s Euro Cup next year.

Irish Down Under – Sarah Rowe AFLW
Scroll to top