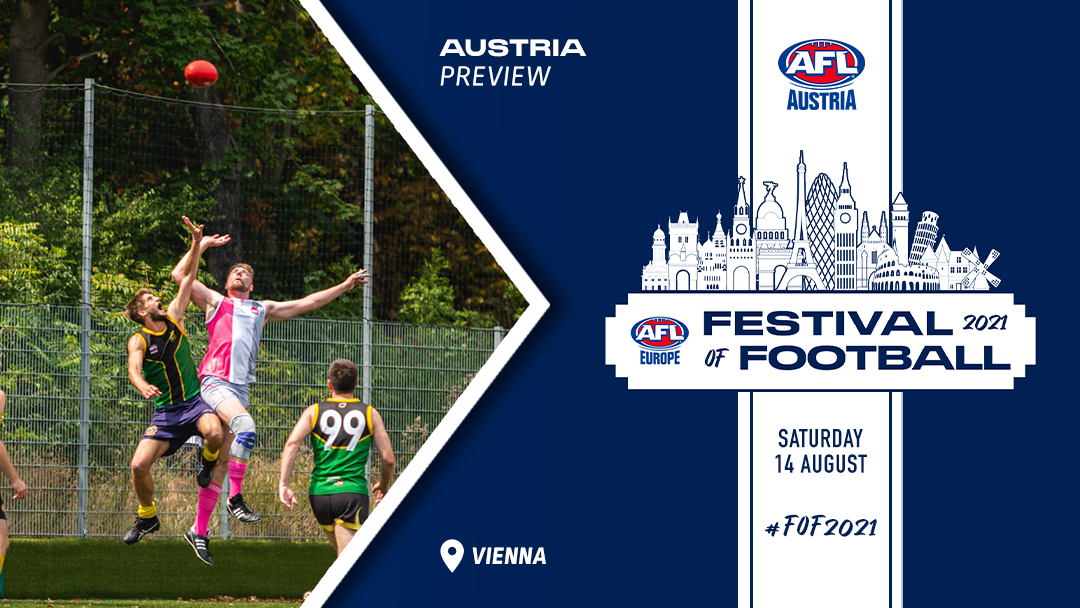 The 2021 AFL Europe Festival of Football will see nearly 15 countries and up to 50 teams competing in local tournaments across Europe and all on the same day of Saturday, August 14th. Preview Austria’s tournament that will host the Vienna Galahs, Styrian DownUnderDogs and Budapest Bats in the nation’s capital.

The Budapest Bats are counting down the days to their debut Australian Football match, heading to Austria on the 14th of August to compete against the Galahs and DownUnderDogs in the 2021 Festival of Football.

It’s been a patient wait for the standalone club in Hungary who formed in 2019 and have shown remarkable resilience, but can now finally prepare for their first competitive hitout in what will be a 9-a-side, three-team tournament in Vienna. Zoltan Marosy of the Budapest Bats shared the team’s excitement ahead of the 2021 Festival of Football.

“Some of our players have been training for over a year without matches… it’s nice to have that extra motivation now to train towards the games next month,” said Marosy.

“We’ll try our best, it’s our first tournament… but we can’t wait to celebrate the little things like who will kick our first goal, and just get that first game of experience into everyone.”

The format of the round robin will see each team play each other once, before the top two teams progress into a grand final.

Coaches and captains from each team will determine the best players from each match to decide the tournament’s best player of the day.

Both Seb Böhm of the Vienna Galahs and Michi Jud of the Styrian DownUnderDogs said that they were eager to see how the Bats would compete at the tournament, having never played a match before.

“We’ve been in touch with the Bats for some time now and up to this point they’ve only had a small training group,” said Böhm. “I look forward to seeing how they’ve built their team and how they perform. I think they’re a lot younger than we are so it’s going to be a tough match-up against them.”

“I’m really hoping the Hungarians can show up with as many people as possible,” said Jud.

“I hope we can provide them with a good and safe environment for their first games, and wish them a great day of footy.”

Players from the Galahs and DownUnderDogs were able to get their first game of the year underway earlier this month, teaming up to play against the visiting Munich Kangaroos. Prior to this, the last time Austrian players could play a game was in Graz for the 2020 Festival of Football in September, where they played a mixed men’s and women’s match.

With players representing their own teams this time around, and with the Galahs looking to continue their undefeated streak through last year, it’s set to be a competitive day of Australian footy.

“It won’t be easy for the Bats and DownUnderDogs coming to Vienna and playing us, ” said Böhm.

“We’re going into the tournament confident because we didn’t lose a game last year. We want to continue winning, that will be the aim for us next month.” Whether the DownUnderDogs can claim a win against the Galahs at the Festival of Football or not, they will have a chance later in the year as the two Austrian teams are ready to kick off their 2021 Austrian season.

They’ve also planned an away day to go up against Prague, as well as potentially join in with Budapest for some of the Bats’ plans as shared by Marosy.

“After the Festival of Football, we’re planning a game against Croatia’s Sesvete Double Blues, as our first game in Hungary,” said Marosy.

“That will be shortly after the Festival of Football, and I’m sure will be another great learning experience.”

Best of luck to all players competing in Austria for the 2021 Festival of Football.

Swans, Kookaburras claim victories in Dublin for round two
Scroll to top