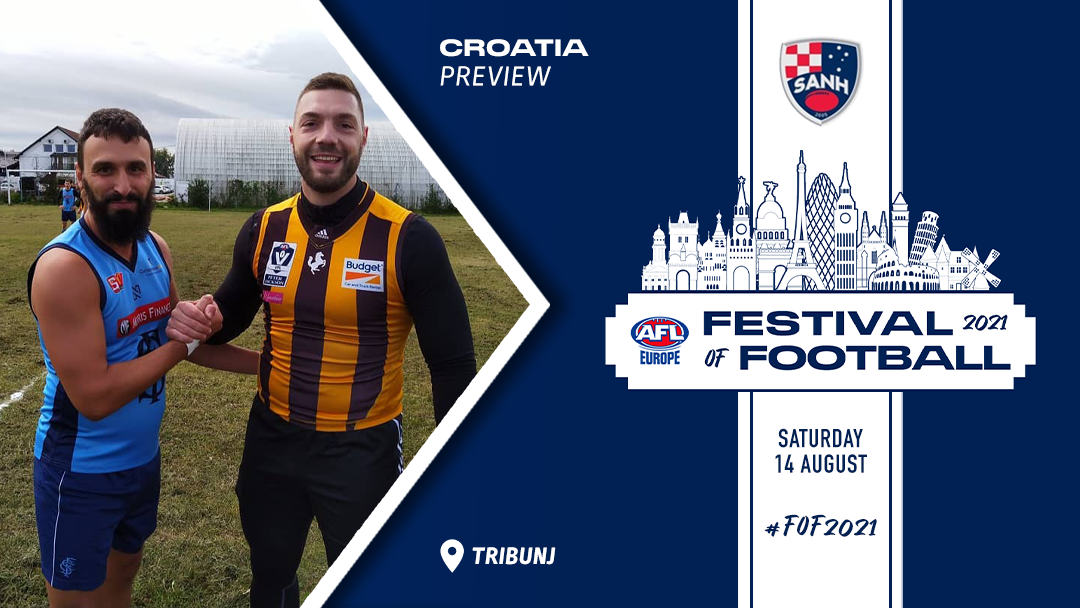 The 2021 AFL Europe Festival of Football will see nearly 15 countries and up to 50 teams competing in local tournaments across Europe and all on the same day of Saturday, August 14th. Preview Croatia’s tournament that will host five teams in the town of Tribunj.

Men’s and women’s players in Croatia will be venturing three hours south of Zagreb to the small village of Tribunj to compete in Croatia’s tournament for the 2021 Festival of Football.

The town, with a population of less than 2000 people, boasts an oval located just 500 metres from the seaside which may well come in handy after a days play in the hot, Croatian summer. “Having the teams compete in Tribunj will be good for the promotion of the sport but also for the small town to have an event like this occurring,” said Irsag.

“The locals can sell their town to others to come watch Aussie Rules and check out a sport that they likely haven’t seen or ever heard of before.” The teams involved in the men’s competition consist of the Zagreb Hawks, Zagreb Cvjetno Dockers and Sesvete Double Blues.

These three teams will compete in a round robin that will see the top two teams progress into a grand final to determine the winner of the men’s tournament, which the Dockers won convincingly last year.

In the women’s, Žkan Zagreb Panthers and Žkan Sesvete Redlegs will go head-to-head in just the one game but will last it out in a full, four quarter match.

The teams in Croatia have been fortunate to have already played a few games this year, getting their season underway in April. “We’ve been lucky to play four rounds of the Croatian league. Unfortunately we had to postpone the Croatian Cup, but currently in the men’s the Dockers are sitting on top of the ladder followed by the Double Blues and then the Hawks,” said Irsag.

“In the girls competition, the Redlegs have gone undefeated so the Panthers will be ready to give it their all on the 14th.”

It’s looking like an exciting back half of the year for Australian Football in Croatia as they get set to finish off the remaining two rounds of the league as well as find a new date for the Croatian Cup.

Adding to that is the excitement of finally playing on their new 18-a-side oval in Zagreb. “For the first time ever, we’re going to be playing 18-a-side matches in a three round league for both the men’s and women’s teams,” said Irsag.

“It’s looking like it’ll happen in October so it should be interesting and completely different. Finally we get to play 18-a-side, it’s exciting.

“We had no idea what we were getting ourselves into when we started it. We ended up buying an old, rundown lawnmower and every other day would spend hours sitting on it driving around in circles to maintain the pitch… Soon it will all be worth it.”

Irsag wanted to share that nearby teams to Croatia that are permitted to travel and enter Croatia safely, whilst carefully following appropriate restrictions, are welcome to join them for the Croatian Cup later this year (once a date is confirmed).

For now, all attention focuses on the 14th of August as the players in Croatia look to join up to 14 other countries across Europe to compete in AFL Europe’s second Festival of Football.