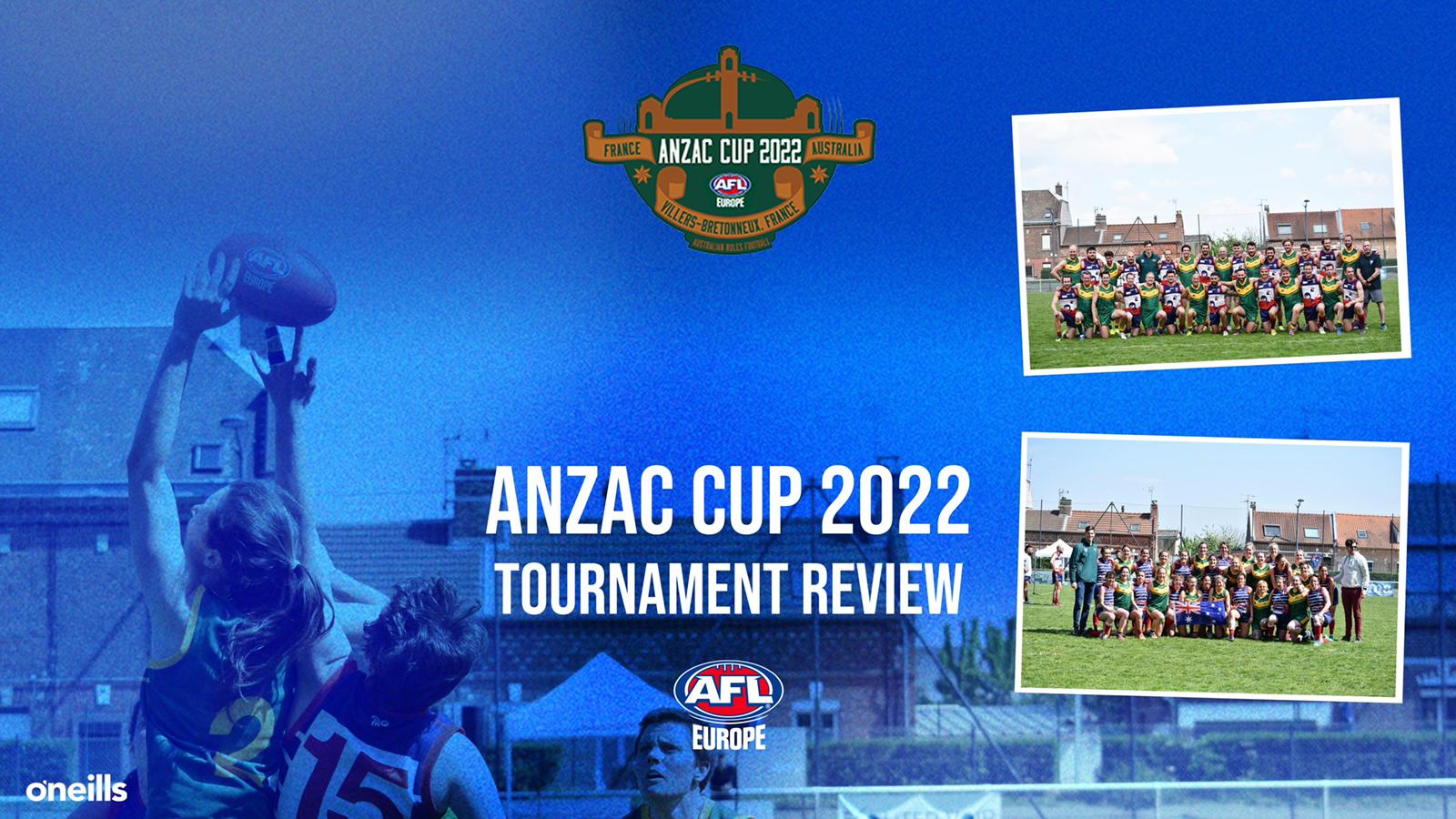 The ANZAC Cup returned to AFL Europe’s events calendar in triumphant fashion this past weekend. The 12th edition of the contest was as competitive as ever and saw both the Australian Spirit men’s and women’s teams emerge victorious against their French counterparts. The spirit of the ANZAC’s we were there to remember, was ever-present throughout both matches and every player in attendance should be proud of the way they carried themselves.

The ANZAC Cup weekend serves as an opportunity for Australians and French alike to reignite and reaffirm the bond they formed over 100 years ago in the town of Villers-Bretonneux, France, which served as a pivotal location along the Western Front during the first World War. Proceedings kicked off on Saturday when members of both the Australian and French footy sides put on an AusKick style, Aussie rules tutorial session for the children of Villers-Bretonneux. Over forty children were exposed to the game and taught how to kick, mark and handball in a fun and friendly atmosphere. The session served as the perfect way to begin the weekend and renew Australia’s connection to the town – sharing the game we all love with the next generation of French footballers, and let’s just say, we saw quite a few future stars in the making.

Following the AusKick session, our footballers spent Saturday afternoon under the tutelage of former Brisbane Lion and current Australian Spirit coach, Justin Clarke. Justin took both sides for a short and sharp training session to polish their skills ahead of the following day’s games. The short training was a great opportunity for our footballers to get to know each other, as many of them had never previously met, and share stories of their personal connections to World War One and the town of Villers-Bretonneux.

Saturday evening saw our athletes receive their ANZAC Cup jerseys at a small presentation put on by our French friends in the neighbouring town of Corbie. During the ceremony, the Australian Spirit captains were officially announced; congratulations to Sebastian Permain and Angi Crispe for earning the honour of captain for the men’s and women’s teams respectively. Seb and Angi were selected because of the way they represented the Australian Spirit both in the lead up to the weekend and throughout Saturday’s events. Both individuals were incredibly encouraging, helpful and genial – quickly distinguishing themselves as leaders.

Sunday was gameday and although we were there for more important reasons, the competitive fire was lit underneath both the French and Australian outfits as they prepared for the first bounce. As is tradition, the two matches were preceded by a formal ANZAC Day ceremony with a rendition of ‘The Last Post’ on bugle, a minutes silence and both national anthems played prior to the games commencing.

The day began with the women’s match-up and expectations were high but both outfits rose to the occasion and put on a show for the many local spectators who had come down to get a taste of footy. It was the French who came out firing, jumping to an early lead and keeping the Spirit goalless through the first term, but the Australians managed to claw their way back into the contest thanks to some relentless tackling from Katren Rogers and Anna McGlade. At the final break, just three-points separated the two sides, Australia holding a narrow advantage. The final term was a different story however, with the French finally faltering under the Australians pressure and the Spirit able to convert with more consistency, almost tripling their three-quarter time score. When the final siren sounded, Australia had managed to build a 22-point lead. The final score was France 1.7 (11) defeated by the Australian Spirit 4.11 (35). Australia’s Anna McGlade was awarded best on ground for an imperious performance despite dislocating her finger in the first term.

After the women had put on such a skilled, fiery and competitive display, the pressure was on the men to match it. On this occasion, it was the Spirit who came out firing. Using a strong wind to their advantage, Australia came into the first break two goals to the good, however, the lead didn’t last long. The French came at the Aussies with a vengeance, swinging the momentum and turning the game on its head from the second the ball was bounced to being the second term. At half-time, France held a two-point advantage which it was able to extend to a two-goal advantage at the final break. With the Spirit reeling, coach Justin Clarke, captain Seb Permain and forward Matt Hamilton stirred the side with a number of inspiring speeches and boy did the Aussies respond. Against a strong wind, the Australians fought to gain the momentum with an unabating persistence. Despite goals from the French and missed opportunities at the other end, the Spirit were able to will themselves to victory thanks to a last minute, lead-changing goal. The final score was France 8.11 (59) defeated by the Australian Spirit 8.13 (61). Bradley Geddes of the Australian Spirt was awarded best on ground for his countless defensive efforts, holding the Aussies together when they were on the brink of defeat.

All athletes, from both countries, are to be commended for the way the two matches were played. Despite the air of competition, the foremost factors present throughout the contests were mateship, unity and good-will.

Following Sunday’s games and subsequent celebrations, everyone’s attention turned to the weekend’s main event – The Dawn Service at the Australian National Memorial in Villers-Bretonneux, located at the site of one of the fiercest battlefields in World War One. Monday morning’s Dawn Service was a once in a lifetime opportunity for the Australian Spirt to come together and share a moment of remembrance. Each player who was in attendance possessed various familial connections to the ANZAC’s, making for an emotional morning paying respect to those who sacrificed their tomorrow for our today. Following the service, we had the privilege of exploring the Sir John Monash Centre, located next to the memorial. The interactive museum was equal parts amazing and harrowing and is a must-visit for any Australian seeking to gain further insight and perspective into the horrors of the first World War.

Finally, following our visit to the Sir John Monash Centre, we bid our host families teary goodbyes before going our separate ways. We cannot thank the people of Villers-Bretonneux enough, especially our many host families, for welcoming us to their town with such generous hospitality and kindness. What was already a robust, undying bond, only grew stronger. Additionally, an enormous thank-you is also in order to our French liaison and President of the ABA, Xavier Graux, the French national women’s and men’s Aussie rules sides, the members of the Australian Spirit squads, our umpires and the many volunteers who without, this weekend wouldn’t have been possible. We thank-you for all of your help and look forward to renewing and maintaining our connection in 2023.