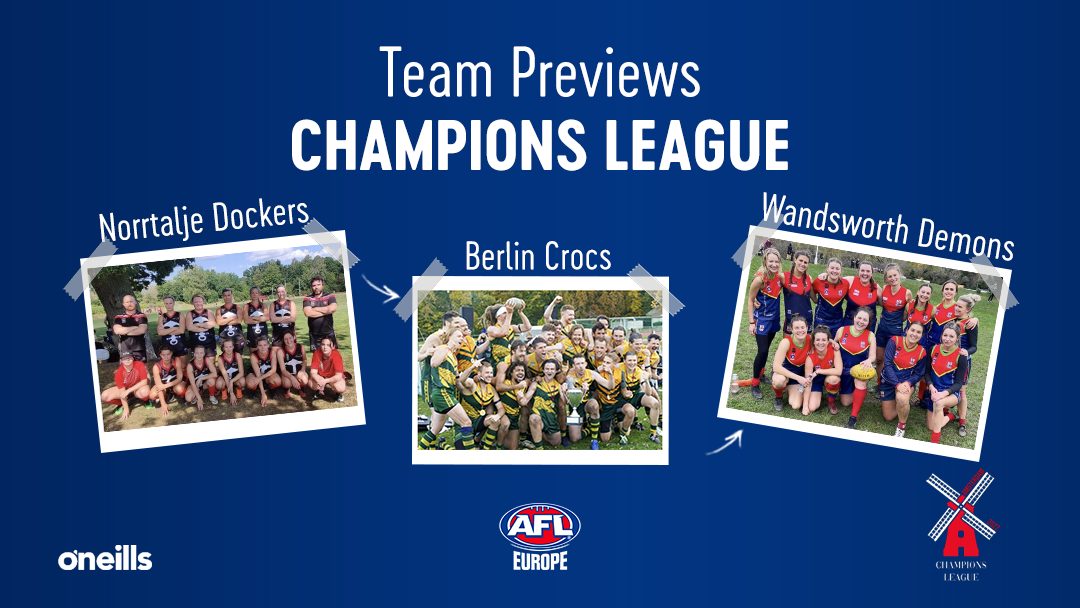 This year marks the sixth edition of the tournament, and the 9-a-side matchups will all take place on Saturday the 9th of April in what will be an action packed day of competition. With the event less than a month away, AFL Europe will be previewing all the teams competing. For part six of our team previews, in the men’s division, we take a look at Germany’s Berlin Crocodiles and from the women’s division, we sat down with Sweden’s Norrtälje Dockers and England’s Wandsworth Demons.

The Berlin Crocs qualified for this year’s Champions League by winning the AFLG competition.  They defeated reigning back-to-back Premiers Hamburg in a hard fought battle 13.13.91 to 7.2 44.

Berlin have not been involved with any preseason tournaments or practice games.

This will be their first competitive outing for 2022., outside of intra-club scrimmmages.

The Crocs pride themselves on being hard at the contest and that’s what we hope everyone at the Champions League will see.

Tino Roth – Born and raised in the back streets of Berlin, Tino came to AFL last year and was an immediate success down back.  He took his backstreet attitude to defending and is uncompromising and always making life tough for his opponents.

One Crocs official has said he will eat his hat if Tino isn’t in the national side this year.

Conny Hoher – Conny is a Crocs stalwart, being one of only 4 players to play in both Crocs Premierships (2017 & 2021), he has also been a permanent fixture in the German national side since he was 18.   This silky half forward oozes class and when he has the ball in hand you can be sure it will find a teammate .

Magnus Mariuson – When he isn’t walking the red carpet, Germany’s fiercest Viking will be found at the bottom of every pack.  Using his body as a deadly weapon, Magnus craves the hard ball and has taken to AFL like a duck to water.  Spending most of last season playing on ball, Magnus also kicked the 3rd most goals for the crocs during the season.  Not a bad year’s work in your first ever AFL season.

Berlin Croc’s key strength is how hard they play for each other.  Berlin is an amazing Club that is inclusive to all and has built up a very strong community.  This is reflected in the way they play, protecting each other on and off the field.

Berlin ranks the Champions League very highly and are very honored to be able to participate.  Being their first major hit out for 2022 they are under no illusions to the challenge they face to be competitive with the best clubs in Europe, but will give it their all and use the competition as a springboard for the upcoming German season, with the goal of being able to come back next year. No, unfortunately not outside the club. We have been organising mixed teams indoor tournaments, as a warm up for the trip. We still have snow in Sweden, so it’s hard to play outside.

A fun bunch of girls playing their hearts out for the sport they love.

The Norrtälje Dockers players deliver the most unique things, in the most unlikely situations, so it’s best that you keep an eye on the whole team.

We are a team with almost only Swedes and we play our way. It can shock the opposition and give us an advantage in the match, when they expect the obvious and we deliver something else.

Getting to Amsterdam is definitely the highlight of the year. Every kick in the rain, running in snowstorms, the gym sessions in the morning, it’s moments like the Champions League that makes it all worth it. Champions League, and to have a beer in the sauna afterwards…..

Do you have any extra bits of information about the club, like past years funny/interesting stories? We are an AFL club with Swedes, where almost no one has heard of the sport before they become members of the club. The foundation of the club is more or less built on the Sund family, a family with seven siblings where everyone has been involved in the club in one way or another. All the siblings, boy/girl-friends have played for the club and on this trip there are three sisters in the women’s team and in the men’s team you will find their brother together with three of the sisters’ boyfriends. Norrtälje Dockers is the definition of the club being one’s family. We won the AFL London championship, beating our great rivals the West London Wildcats by less than a goal in the pouring rain in 2021.

We haven’t managed to play against any other teams, but held a really successful trial match for girls interested in playing in Amsterdam. We’re hoping to get another intra-club match in ahead of the champions league.

Lots of running and skilful footy! We worked hard last season to play in a way that is attractive on the eye, and focused on hitting targets and playing clean football. We’re hoping to carry that into this season.

Each of players is bringing something to the team, but a special mention to Kelsy Dyer who won the league’s leading goal scorer award last year in her first year of footy.

Teamwork – getting through covid, and pulling together to win the grand final last year has really built a sense of togetherness; our girls are keen to get out there and play for the jersey and each other.

It’s the pinnacle! Competing against the champions of all the leagues in Europe is a huge privilege. We can’t wait to get out there and start playing and other teams better watch out – we’re coming for victory.

One of key players, Priscilla Lodge, is unfortunately unable to make the tournament this year as her sister’s wedding is back in Australia. Last year, she was chaired off after our grand final, amidst much sadness by all, having played a big role over the last few years  as VP at the club. 3 weeks later she promptly U-turned and will be back at the club again this year; safe to say any news of her to heading back to Australia will be taken with a pinch of salt next time! O’Neills to continue its partnership with AFL Europe