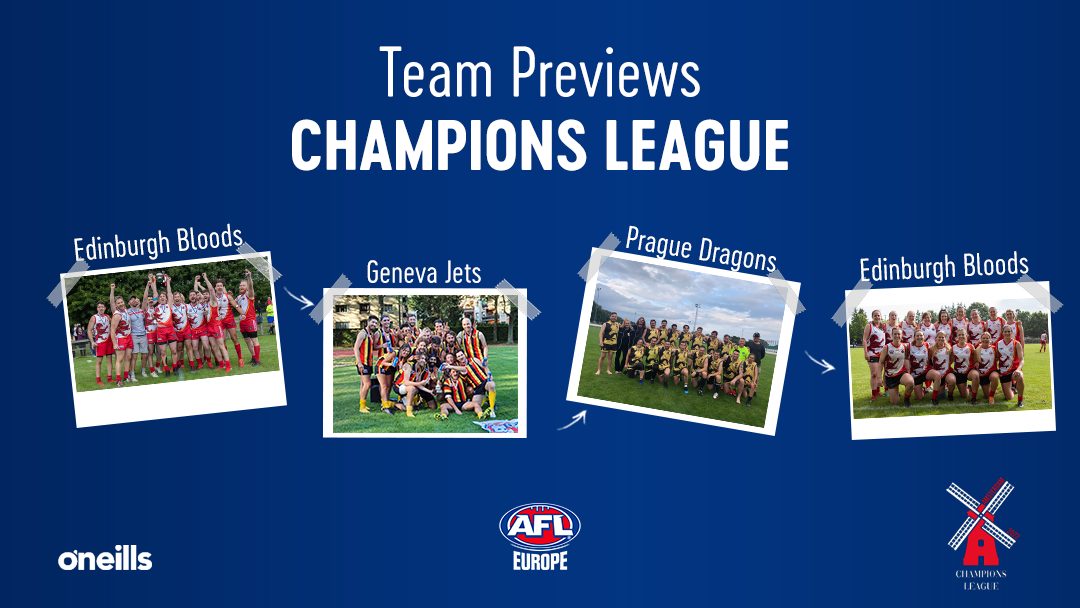 This year marks the sixth edition of the tournament, and the 9-a-side matchups will all take place on Saturday the 9th of April in what will be an action packed day of competition. With the event less than a month away, AFL Europe will be previewing all the teams competing. For our final round of team previews, from the men’s division, we take a look at the Czech Republic’s Prague Dragons and Switzerland’s Geneva Jets. Additionally, we spoke with Scotland’s Edinburgh Bloods men’s and women’s teams.

Prague Dragons participated in the Wolves Cup in Dresden in late March, which included Dresden, Wroclaw and Switzerland teams participating.

Under very windy conditions, Prague won the tournament by beating Switzerland in the semi-final and then Dresden in the final. Great preparation for the Champions League!

A stronger team than we have fielded in the past. With the exception of a few players, we have the same playing group as 2021 and have formed a solid foundation for a mature team.
We had a long playing season last year and our numbers have been good at training, so we are more prepared than where we were last year.

Billy Hutch (nickname Tom Sellick) is one of our stronger players who learned his craft playing some country football in Australia coming up against older opponents. Never takes a backwards step and loves getting his hands dirty.

Rory O’Dwyer is another strong performer who should get some touches in Amsterdam. Whilst his knees are about to give way at any moment, he covers some serious ground in the midfield.

Provided we give him the opportunities, Ronan Wordworth coming out from full forward should give us some good accuracy in front of goal. He is looking trim and ready to hit the packs.

Having a good 2021 season under our belt the players are getting ever more familiar with what is needed to win games of football together.

And with only a handful of old veterans in the team we have plenty of youth and pace to run out the day.

With very strong opposition, no matter who we play and Australians being eligible to play, the Champions League is the pinnacle of the football calendar.

Coming up against Europe’s best players in such short games is the ultimate test for us and sets the high benchmark of where we want to be.

Cathal Doherty with his cracking mullet should catch some eyes, bobbing around as he attacks the ball. He would look like Bailey Smith if it was not for the curly hair.

And our courageous captain, Jan Novak, knocking back a shoey regardless of the outcome at the end of the day. This year he has agreed to drink from one of our midfielder’s boots who has size 12.5 hoofs. The normal way – put more kicks through the big posts than any other team. That led us to the Swiss Premiership the last three years and that qualified us for the Champion’s League.

Here in Switzerland we call ‘pre’-season ‘ski’-season. We believe it’s much more effective than actually training.

A new bunch of teenage Swiss boys who still don’t quite understand the rules but still manage to look and play better than the Aussies.

Coach Tommy ‘Danger’ Ross and Seb ‘the shoe’ Permian will be explosive out of the guts and generally around the ground.

This is our first time entering the Champions League, so we are stoked to finally get a crack at it and represent Switzerland. We aim to stir the pot and dethrone a few teams.

I believe we are the only contact sports team named after a water fountain. The Bloods men won through to the Champions League by claiming their third successive Scottish premiership, defeating the Greater Glasgow Giants in front of a huge crowd at the end of last summer.

The Bloods women claimed the first AFL Scotland’s women’s premiership with a comprehensive win over the Glasgow Sharks following an undefeated season.

The club hosted an intra-club practice match recently, which gave good insight into the game for new players and a nice tune-up for returning players.

The Bloods men will be relying heavily on their Scottish and local UK players at this year’s event and will be exposing some fresh new players to the game in Amsterdam.

The Bloods women are excited to test themselves against the best teams in Europe and will be fielding a team with a large number of players who helped them claim the Scottish title. The Bloods will be led by their Scottish skipper Fraser Smith, and fellow UK local Sam Stokes who finished third in the club’s best and fairest count in his first season.

Veteran Adam Governi finished Runner-Up in the best and fairest and will headline a small number of Australian players.

The Bloods women will be led by coach and best and fairest winner, Sian Furniss, who is also taking the reins of the Scottish women’s national team this season.

Australian Hannah O’Brien and Scottish duo Elinor Geddes and Aimee Dallas will also be ones to watch this season.

I think how tight we are as a club is a real strength that you will see on show in Amsterdam. We train together as one team and hopefully you will see some of our preseason practices on display at Champions League.

This is massive for us. The Champions League is the perfect way for us to kick off our premiership defence by testing ourselves against the very best in Europe. I personally was blown away by the standard of the competition in 2019 so feel we will benefit from that experience. This is an event we have had circled as a club since the final siren of our respective grand finals last season.