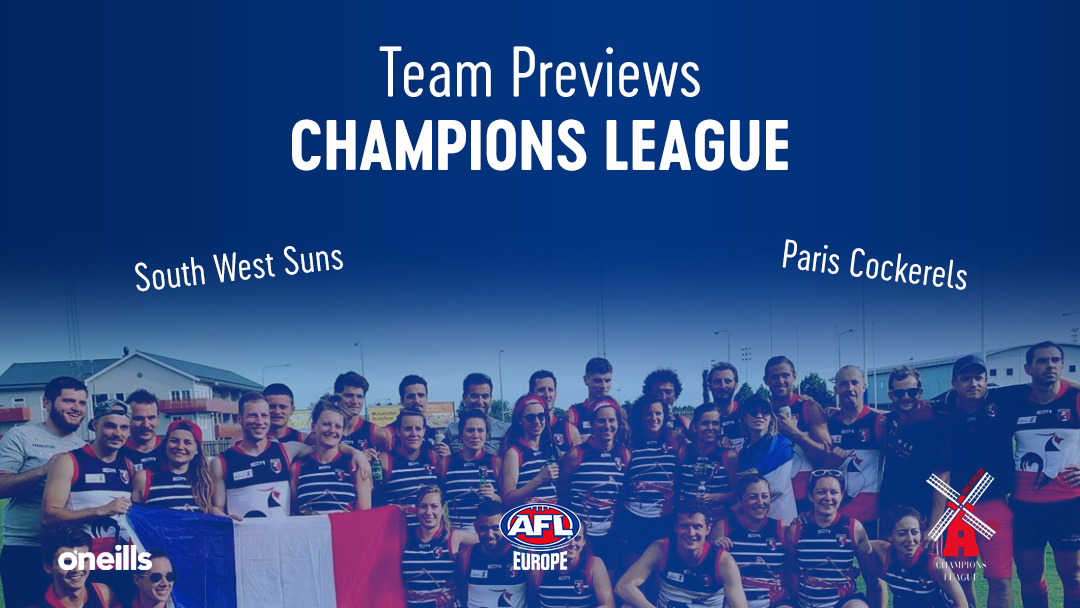 This year marks the sixth edition of the tournament, and the 9-a-side matchups will all take place on Saturday the 9th of April in what will be an action packed day of competition. With the event less than a month away, AFL Europe will be previewing all the teams competing. For part three of our team previews, we take a look at two French outfits, the Paris Cockerels and South West Suns.

The Paris Cockerels defeated the Toulouse Hawks in the final of the 2019-20 French national competition (CNFA). Since then, the team has been starved of opportunity as we look to rebuild during the 2021-22 season.

The team has been participating in the 2021-22 French national competition, which started last September. This year the competition is divided into a north and south conference, hence most of the matches have been based around Paris. In addition, some of the players participated in a practice match against London-based players in an exhibition match during the Gallia Cup women’s tournament earlier this month.

A committed effort with all players and support staff running in the same direction (there will be no “lay down Sally’s” in our squad). We have not put a ceiling on what we can achieve and, as the adage goes, we’ll be taking it one match at a time.

All of them. We have a good mix of French players, Australian players and players of other nationalities.

The players voted for the following values to be adhered to in the club: fun, inclusion and respect. The team we will put on the park will adhere to those values. We will play as a team and have fun while doing it. We are a relatively tall team and will look to leverage from that in the way we play.

We are the second seed in Group B, being a team ranked by AFL Europe between 4 and 6 out of the 12 teams competing. Having a French team ranked in the top half of a highly competitive tournament is an and honour and acknowledgement of the strength of Australian Football in France and we will do our best to complete not only for the Paris Cocks Football Club but, more broadly, the stakeholders and champions of Australian football across France. When we have competed in the past, as a general rule, we have ended the pool rounds 2-1. This year we will be looking to go one better.

The team’s first tournament was at the French Cup (Coup de France) in 2008. It was played on grounds akin to a rubbish dump (or a “potato field” as Yevgeny Kafelnikov once described a grass tennis court in Australia), with rocks, flints and other sharp objects aplenty. The team won despite having three players end up in hospital and just about everyone else playing sore. We are looking forward to playing on the flat, true decks in Amsterdam! This year we played four matches North team vs South team (the South West Suns, made of players from Bayonne, Toulouse and Bordeaux).

As we went undefeated across all four games, the Suns have qualified for the Champions League.

To prepare ourselves we recently played the Gallia Cup in Paris ! The tournament went well, the girls did a great job to finish in 5th position. It was awesome to play against European teams to see where our level was at. The experience was super encouraging!

The girls will give everything to get the best result possible. We never give up, we will fight to show that we know how to play footy. It’s a great opportunity for us to show that in France, female players are strong!

You definitely should keep your eyes on Claire Perez (forward), Camille Portal and Pauline Clement (midfielders) and Emilie Giancarli in the back line.

Our strength is our team. It’s more than a team. We have a group with strong relationships. On the field, the girls will do everything for their teammates.

We are so honoured to be able to come to Amsterdam, represent AFL France and we think that CL hosts the highest standard of footy we have ever seen in Europe. It’s such a pleasure to be able to visit one of the most beautiful cities in the world, play this awesome game and then get to party with all these awesome footy players!

Sorry, I don’t have any answer for this question…but perhaps I will after CL.