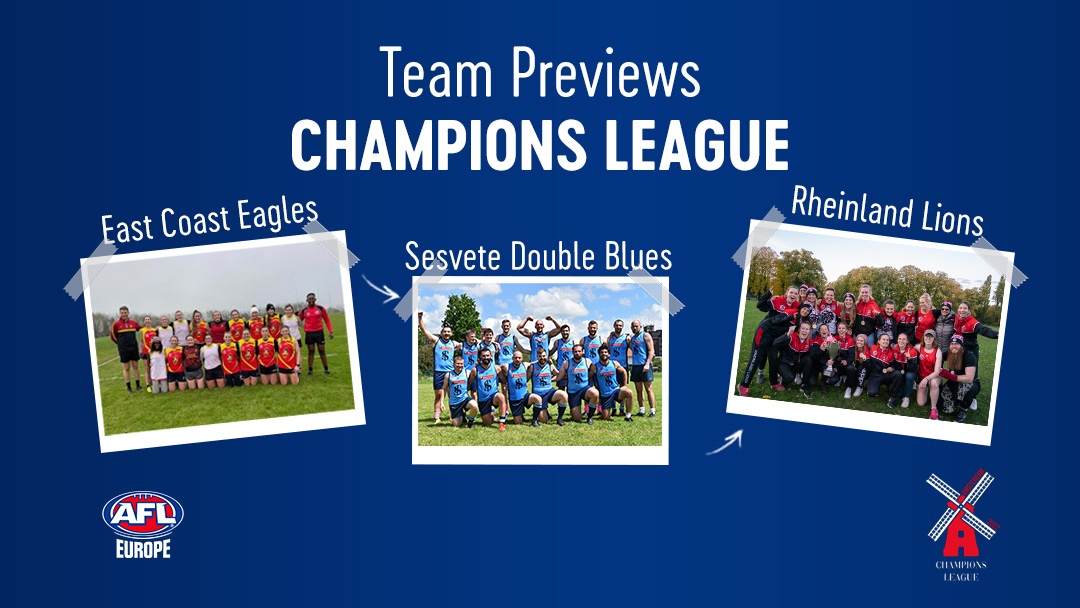 This year marks the sixth edition of the tournament, and the 9-a-side matchups will all take place on Saturday the 9th of April in what will be an action packed day of competition. With the event less than a month away, AFL Europe will be previewing all the teams competing. For part two of our team previews, we take a look at Croatia’s Sesvete Double Blues, Northern Island’s East Coast Eagles and Germany’s Rheinland Lions.

Sesvete Double Blues are the back-to-back champions in the Croatian League. Last season we fought for the title to the very end and in the last game, we provided an exceptional display against our rivals and proved that we are undoubtedly the best male team in Croatia.

We tried to organise a friendly game or two, but due to the Covid situation and long and hard winter, we were unable to do so. Luckily, we’ll play in the Croatian cup before Champions League and we’ll use it to sharpen our skills and upgrade our game.  Of course, we are going to do our best to keep our winning streak going and to lift one more trophy before Amsterdam.

We are really a close-knit bunch of guys who will do everything for each other on and off the field. You can expect a brave and stubborn team that can upset the odds and fight for the medals.

We don’t like to singkle out our individuals because we breathe as one. Every player on the team, on the bench, or on the stands is important as any other and gives his value to the team. If I really, really have to highlight one or two players, then it’ll definitely be our best player and coach Josip Motik, probably the best player on the continent at the moment. I’m sure many teams remember him from games he played against them. Also, have to mention rising star Matej Bertović who has the potential to become the best full forward in Europe.

We are not a bunch of individuals, we work and play as one. We know each other to the soul. Every move, every gesture of every guy on the field tells something to his teammates that only they can understand and use that to improve our game at that moment. Knowing that you have those guys backing you in the game and life is the best thing in the world.

Champions League is unarguably the best competition in which we compete and every year we are looking forward to it. It is something else and we are really excited to see what we can do in Amsterdam.

We have a homemade brew called ‘Same Jake’ and we hope to finance our next trip with the profits. We plan to bring a couple so that you guys/girls can try it. You can expect to see some sharp shooting, excellent work rate and a high energy team spirit.

The teamwork from number 1 to 16 will be our main strength on the day. Siobhan Sherrin always makes an impact whenever she has a football in hand. She is a natural leader. Niamh O’Neill, Eva Cafolla, Elaine Maguire and Brenda Bannon have the strength, fitness and skills to keep the game intensity and speed at a top level from the first match of the day until the very end. Jade McGee will be wrapping up anyone that comes into our backline looking for a score.

Our key strengths will be our speed and ability to move the ball quickly up the pitch. No team will have an easy time scoring against us as all our players are brave in the tackle and will never give up the chase for possession.

CL means so much to this team. We are a newly established team. We are still getting our finances, club kit and equipment together. So it has been all hands on deck these past months preparing for CL. I would like to thank the Ulster Kookaburras Club for loaning us playing jerseys and equipment over our winter league, but Amsterdam will see a fully kitted out East Coast Eagles side wearing our own new kit and dining the blue and yellow of the Eagles which has been kindly sponsored by Norso Medical and Belvoir properties.

Competing in CL ranks top of our AFL Europe calendar. The excitement around this competition is second to none. The momentum and excitement is building week by week as we edge closer to April. We have never attended this tournament before but have heard plenty of fantastic stories about the event in years gone by and can’t wait to experience it first hand. We qualified by playing against four other women’s teams in the AFL Germany league. We faced the Hamburg Dockers in the Grand Final in October 2021 and fought our way back from a three-goal deficit to triumph with a score of 59 to 35.

At the start of March, we participated in the Gallia Cup in Paris, which was a great way to start the season and gain some match practice. We came away with two wins and two losses and – most importantly – a lot more experience. Some of the teams that we played against in Paris we will meet again in the Champions League so there may be some unfinished business there.

Lots of excitement, love for the sport, a colourful mix of footy veterans and some very talented rookies keen to test their skills against some of the best sides in Europe.

Anna McGlade, our two times season MVP, she always brings lots of energy to the game and is amazing to watch around the ball.

The great bond between players, which means that we know our teammates very well and are always there to support each other, both on and off the field.

Despite being this early in the season, the Champions League is definitely a highlight in our 2022 calendar. With the 2020 season cancelled and last year’s season being shorter than usual we are keen to play some good footy and face some tough sides to see where we stand ahead of the AFLG season.

Something that is very dear to our club is the “Don’t drink and drive. Go pink for life” campaign in memory of our late founding teammate Janine Benecke, who would be so proud to see how far our team and women’s footy in Europe in general has come. Check it out: https://gopinkforlife.de/en/home