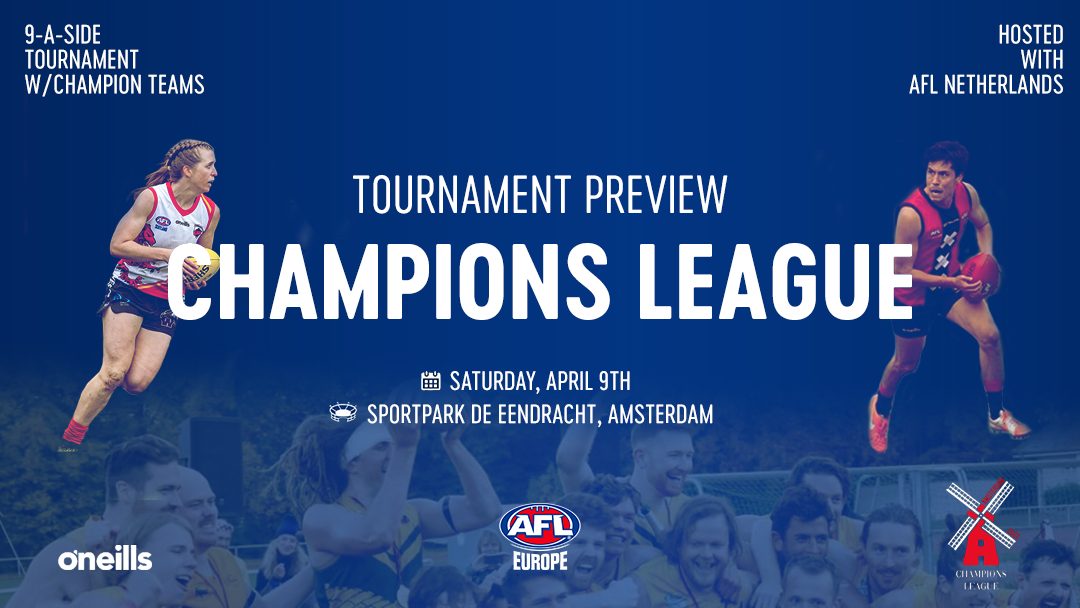 We’ve been waiting with bated breath for AFL Europe’s Champions League to make its return to our events fixture for the first time since 2019 and its finally upon us. The sixth instalment of the famous tournament is less than a week away, with Europe’s top clubs making their final preparations before descending upon Amsterdam’s Sportpark De Eendracht complex on Saturday April 9th.

Once again, there will be both men’s and women’s competitions. After their big win on home turf in 2019, tournament hosts, the Amsterdam Devils, will finally get a chance to defend their title in the men’s competition. However, with so much talent coming to the tournament and several hungry club’s set to make their CL debut, expect the level of competitiveness to go up a gear in this edition of the tournament.

On the women’s side of the fixture, as Ireland’s West Clare Waves aren’t returning, a new victor is a guarantee. West Clare’s Irish counterparts, the Cork Vikings, will have high hopes to keep the Champions League trophy on home soil but the rest of the competition will have plenty to say about that. Keep an eye on the University of Oxford, who come into the competition off the back of a perfect NUL season, Fitzpatrick Cup victory and resounding varsity win.

This year will see eleven teams competing in the men’s competition and ten competing in the women’s. To see such strong numbers returning to the tournament after such a long hiatus is a testament to each club’s commitment to getting back into footy. Once again, teams will be placed into pools for a round-robin of qualifying matches before finals commence.

This year’s fixture has seen each club ranked based off their respective league’s recent performances in CL competition, with debut clubs representing newer leagues for the first time in the CL among the lowest ranks – you’ve got to earn your stripes. Based off the rankings, pools have been created from which round-robin qualification will commence in a format designed to ensure fair fixtures for all competing clubs.

In the men’s competition, the eleven teams have been split into three pools, two with four teams and one with three teams. In order to make up for playing one less qualification game, each side in the three-team pool will start on four points – the equivalent of one win. After teams have played their pool matches, finals match-ups will be determined with the top sides playing off in Semi-Finals for a potential Grand Final birth and the remaining sides playing off for the remaining ladder positions.

The women’s side of the draw has two pools with five teams in each. Following the group stages, the top two from each pool will play Semi Finals and the winners will be meet in the Grand Final. As with the men’s fixture, the remaining women’s sides will play-off in finals to determine final ladder positions.

In Pool A of the men’s competition, we have tournament hosts, the Amsterdam Devils, set to clash with Berlin AFC Crocodiles, Sesvete Double Blues and the Prague Dragons. The Devils sit as firm favourites to top the pool but expect a strong display from their competition, the Double Blues in particular are in a rich vein of form and won’t be beaten easily.

Pool B will see the South Dublin Swans, Paris Cockerels, Norrtalje Dockers and Mid Ulster Scorpions play one another. Ireland is well established as Europe’s most-fear Aussie Rules country, so expect big things from the South Dublin Swans. However, pressure is a funny thing and tournament debutants, the Mid Ulster Scorpions, will relish not being under any pressure and look to seize the opportunity to turn some heads and continue Northern Ireland’s impressive 2022 as it looks to establish itself as a European Aussie Rules powerhouse.

Finally, Pool C has the North London Lions, Edinburgh Bloods and Geneva Jets ready to battle it out for a semi-final spot. We know any team capable of keeping the West London Wildcats out of CL is worthy of respect, so North London will be no pushover and are a good chance to top the group. Both the Bloods and Jets will have their work cut out for them but for two clubs that are perennial winners, if anybody can handle the pressure that comes with a smaller pool, its them.

Pool A of the women’s competition contains the Wandsworth Demons, Norrtalje Dockers, South West Suns, Amsterdam Devils and East Coast Eagles. Good luck picking a winner. This group contains the perfect mix of talent, experience and desire to win. As always, the Devils will enjoy home ground advantage but it’s anybody’s guess who will emerge from this group on top.

Pool B is made up of the Cork Vikings, Oxford University, Rheinland Lions, Sesvete Redlegs and Edinburgh Bloods. Cork and Rheinland both put on strong displays at the Gallia Cup in Paris last month and are looking forward to renewing their rivalry in the ‘Dam. However, as we established, Oxford is deeper into its season than any of its competition and has done nothing but win in 2022 – it’s hard stopping a team in good form and form doesn’t get much better than Oxfords.

Kick-off is at 9am with the presentations scheduled to begin at around 6pm. Make sure you tune in via Sportvox to watch selected games live and don’t forget to peruse our social media channels throughout the day to stay up to date on the all the action.