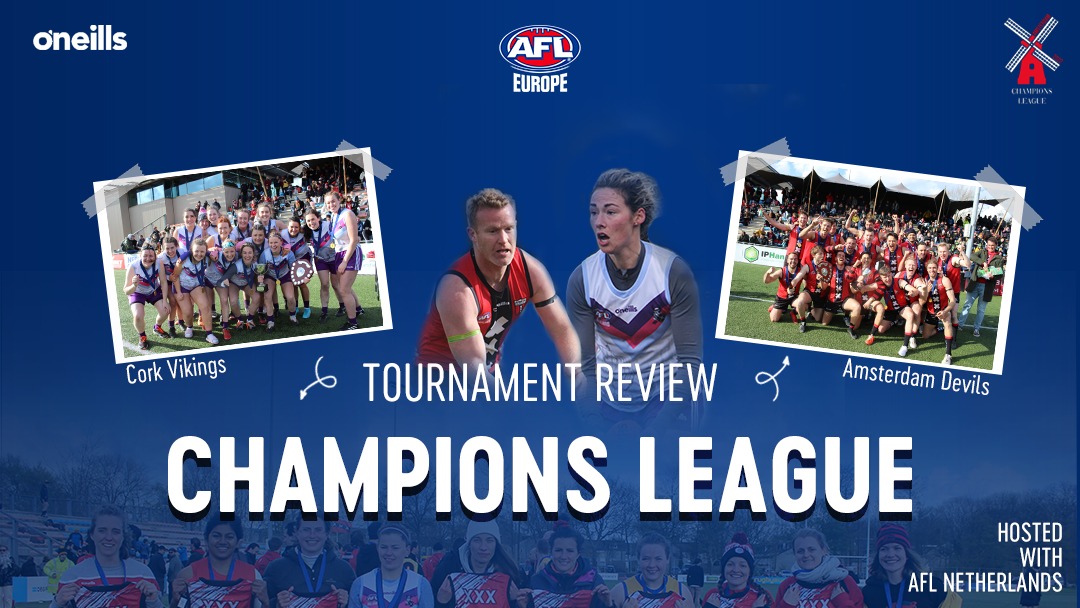 After Champions League was absent from AFL Europe’s events calendar for two years due to the global pandemic, seeing it’s grand return to Amsterdam this past weekend was a sight for sore eyes.

Eleven men’s teams and ten women’s teams arrived at Amsterdam’s Sportpark de Eendracht with the hopes of leaving as champions of Europe. In what was the sixth edition of the competition, with over fifty matches played across five fields and a live stream going out worldwide, the annual nine-a-side tournament went off without a hitch.

Despite the temperamental weather, the standard of competition was incredibly high – a perfect representation of how far footy in Europe has come and how much work was put in by our clubs over the Covid-induced break. Overall, Europe’s premier Aussie Rules club-based competition returned in amazing fashion.

Without 2019’s champions, the West Clare Waves, returning to the competition, the women’s side of the draw was difficult to predict. It also saw the debut of Northern Ireland’s East Coast Eagles, who came in as the greatest unknown of all. Spectators were enthralled to see Europe’s strongest female footballers take centre stage and each and every match-up didn’t disappoint.

Pool A consisted of the Wandsworth Demons, Norrtalje Dockers, South West Suns, Amsterdam Devils and East Coast Eagles. Experienced CL campaigners, the Wandsworth Demons set the tone of the group with a number of dominant performances. However, much like the Fitzpatrick Cup earlier in the year, it was the Northern Irish who took control of the group. Northern Ireland’s East Coast Eagles dispatched each of their four opponents with ease to go through the group stage undefeated. The Devil’s were honourable hosts, determined to play with pride on their home turf and despite a tough day results wise, showed plenty of promise which portends to some strong CL displays in the coming years. The remaining sides battled on valiantly but at the end of the day, East Coast and Wandsworth booked their tickets to the semi-finals.

Pool B, made up of the Cork Vikings, Oxford University, Rheinland Lions, Sesvete Redlegs and Edinburgh Bloods, was picked to be one of the most competitive pools of the day and it didn’t let us down. As is becoming the standard, the Irish Cork Vikings asserted their dominance and went through undefeated, but the rest of the pool was extremely close. Oxford’s winning run finally came to an end, Sesvete showed off its relentless Croatian spirit and the Lions were ferocious at the contest, but at the end of the round robin matchups it was the Edinburgh Bloods who joined Cork and locked in a semi-final berth.

There was an air of inevitability as the women’s finals commenced. Wandsworth were tasked with a meeting against Cork while Edinburgh tried its luck against the fearsome East Coast Eagles. An all-Irish Grand Final was on the cards and it’s exactly what we ended up with. However, that match-up didn’t come easily. Wandsworth reminded everyone why it’s London’s premier women’s club team by putting up an honourable fight and forcing the Vikings to play their best footy after falling behind at half time. In the end however, Cork was simply too strong.  The second semi-final wasn’t quite as close but the Bloods are to be commended for their efforts in front of a packed grandstand. The East Coast Eagles simply refused to be outdone and ran away with the game after a strong start.

The Grand Final was a tale of two halves, bookmarked by a two-to-three goal wind blowing directly down the pitch. Having been the dominant force all day long, the Eagles came out swinging and drew first blood with back-to-back goals in the early stages of the game. The crowd really got behind the tournament debutants as a fairy tale first CL win got closer and closer to becoming a reality. However, the dream run wasn’t to be. With the wind blowing behind them, the Vikings sailed home, overrunning the Eagles to emerge victorious and take home a first CL victory. Cork were the deserving winners, ending the day undefeated across all of its matches.

With eleven sides prepared to battle it out for the win, the men’s side of the tournament was split into three pools. As with the women’s side of the draw, the only CL debutants were Northern Ireland’s Mid Ulster Scorpions, who came into the competition with high hopes despite their lack of experience.

Pool A consisted of tournament hosts and returning winners, the Amsterdam Devils, as well as the Berlin AFC Crocodiles, Sesvete Double Blues and Prague Dragons. There was plenty of feeling on the pitch, with no club holding back and committing fully to their respective ambitions. Prague toiled away valiantly but was ultimately bested by a strong pool. Berlin in particular, served as pool A’s surprise package, proving to be the most difficult match-up for the ever-present Devils, who topped the pool and went undefeated – locking themselves in for a semi final.

Pool B was heralded as the group of death leading into the tournament. Consisting of the South Dublin Swans, Paris Cockerels, Norrtalje Dockers and Mid Ulster Scorpions. Two Irish teams, the Europe-renowned Paris Cockerels and Sweden’s defiant Dockers – impossible to pick a top two. In the end, Norrtalje had a tough day out, failing to register a win but it wasn’t for a lack of trying – it was simply outclassed by some of the competition’s strongest teams. Mid Ulster, Paris and South Dublin each finished with two wins, meaning one club was going to miss out on the top two despite only losing once. After a nervous wait, the Swans were the unfortunate squad who found themselves stuck in third place. Mid Ulster ended up topping the group, with Paris scraping into second and earning a semi final birth based on percentage.

Finally, Pool C, which only had three teams – the North London Lions, Edinburgh Bloods and Geneva Jets – rounded out our day of round-robin matches. It was clear from the outset that the Lions would be the team to beat and unfortunately for both Edinburgh and Geneva, all they could muster were honourable losses against the fearsome London squad. Edinburgh managed a strong win against the Jets but it was all about the Lions in pool C – they looked unstoppable.

The two semi final matchups were: the Amsterdam Devils against the Mid Ulster Scorpions and the North London Lions against the Paris Cockerels. Semi final 1 saw the Scorpions take the reigning champs to brink of defeat, leading all the way up until the final minutes of the second half before a contentious touched-off-the-boot call cost Mid Ulster a goal and ended up in a lead-changing major for the Devils up the other end. The second semi final was somehow even more dramatic. Pitch 1’s wind was immense and it proved to be the difference in a number of finals late in the day, including this one. Paris jumped out of the gates and used the wind to full effect, taking a two-goal lead into half-time. However, pressure is a funny thing, and once North London gained some momentum with the wind early in the second half, they were able to storm home and take the match-up right down to the wire. In the end, it was a goal on the siren to give the Lions a one-point lead that separated the two sides – this was the game of the tournament.

The Grand Final was a battle between two of Europe’s most famous Aussie Rules clubs – the Amsterdam Devils and North London Lions. The Devils came in looking to go back-to-back (with a two year gap), while the Lions were looking for a first CL victory after returning to the competition for the first time in almost a decade. Amsterdam went with the wind first, and although they didn’t quite dominate, they was able to earn a two-goal lead going into half-time, largely due to some inaccurate kicking from the Lions. The second half was a war of attrition. The Devil’s were fighting for their lives, holding on for dear life as the Lions stormed home with the wind. However, on this occasion the Lions were unable to capitalise on simple opportunities, shooting themselves in the foot and ultimately losing by five points. As the old adage goes, bad kicking is bad football and the Devils were deserving winners, earning themselves consecutive Champions League victories – It’s staying at home!

Once again, AFL Europe would like to extend an enormous thank you to AFL Netherlands, the Amsterdam Devils and Sportpark de Eendracht for opening up their facilities to us. Their shared management of the event was second to none and the day couldn’t have happened without the hard work of so many amazing volunteers.

Additionally, thank you to all of our field umpires, goal umpires, coaches, players and pitch managers for playing and operating all the games in such great spirits and with an emphasis on fairness and mateship. Congratulations to Daniel Wild, winner of the Golden Whistle Champions League umpiring award. In addition to umpiring on the day, Daniel was enthusiastic about educating less experienced players on the rules of the game.

We would also like to acknowledge the Australian Ambassador to The Netherlands, Matthew Neuhaus for coming along and presenting the trophies, medals and team of the tournament jerseys to our victors.

Everybody present represented their countries, leagues and clubs with pride – thank you and we can’t wait to see you again next year!