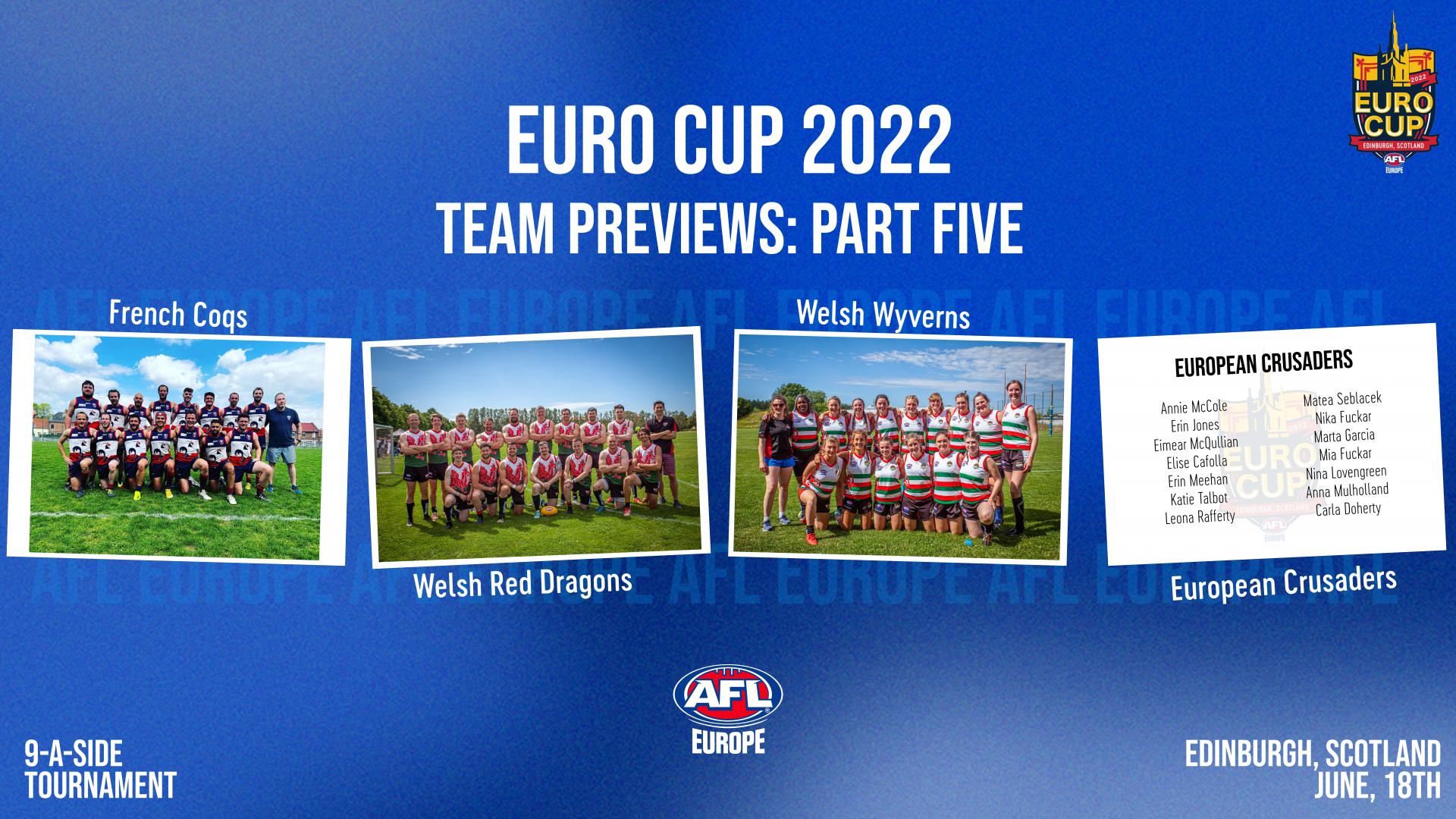 It’s just a couple of days until the Euro Cup makes its much anticipated return to AFL Europe’s year of events. This year, 23 teams will embark on a journey to Edinburgh, Scotland, where the event will be hosted at Edinburgh Leisure, across four grounds. With everyone itching to pull on their country’s respective guernsey for the first time since the pandemic, expect to see a thrilling day of highly competitive international footy. Reigning champs, England (men’s) and Ireland (women’s) will be sure to have a target on their backs.

Set to get underway on June 18, as always, AFL Europe will build up some media hype by previewing each respective outfit ahead of the tournament. In the fifth edition of our team previews, we spoke with the Welsh men’s and women’s teams, as well as the French Coqs from the men’s side of the draw and the European Crusaders in the women’s.

The Welsh Dragons have competed in numerous Euro Cup tournaments over the years, most recently in 2019 when they finished seventh. Team captains Owain Ryland and Scott Jones said the squad always loves competing at the Euro Cup and the opportunity to make new friends, catch-up with old ones and represent their country.

“We have a mix of experience within our squad this year to build for the future. This tournament will be a great opportunity to get some game time for the new faces and for the squad and grow as a team.”

Excited for the tournament’s return, the captains are eager to show what Wales can do and said they’re incredibly thankful to the tournament hosts for getting the competition back under way so promptly.

“It is superb to see the Euro Cup back on the schedule again after the chaos of Covid. Thank you to AFL Europe and AFL Scotland for getting this back on track and everyone is extremely excited to play again internationally.”

“We are always very proud and passionate about pulling on the Welsh team kit and thanks to O’Neill’s and AFL Europe we have a brand-new kit to show off this year! This was won during the pandemic in the Race to the MCG which highlighted what it means to be part of the Welsh team; lots of heart and lots of effort to get us over the line for the win!”

This year will be the 15th participation for the French Coqs at a Euro Cup, who have historically been very competitive. After finishing fourth last time out Sweden three years ago, team member Nicolas Boche said the squad is hoping to return to France with a medal for the first time since 2013, where they finished as runners-up to England.

Boche said, “The team has changed quite a lot recently, especially during the Covid break. 2022 has seen a fresh start for the Coqs as our former Coach, ‘Swadda’, left the spot to Jason, who has been helping develop footy in Lyon since the beginning of the season. Already, he has added a lot to the squad.”

After putting up a strong showing against the Australian Spirit at the 2022 ANZAC Cup, losing in the dying seconds of the match, the Coqs will be hoping to learn from that experience and find ways to win in Edinburgh.

“We can’t wait to wear the national jumper again and play against other countries after almost three years with limited international competition. Covid has been a difficult period for everyone, but French players have worked a lot in their home clubs and we just finished our 2021-22 season last weekend, so the team is in good shape and willing to prove what it is capable of.”

“Playing for your country is always a special feeling and gives you great pride. We have at the same time a young and experienced team with some good footy inspiration as we demonstrated it during last ANZAC Cup in April. There is a really good friendship atmosphere in this team and hopefully we’ll be able to sing again “La Marseillaise” altogether in Scotland on June the 18th.”

Edinburgh will be the Wyverns third time competing as a fully-fledged team. Whilst Bordeaux was the start of the journey for the Wyverns, it took to the following year to obtain a full squad in Cork, followed by another full squad competing in Norrtalje. Unfortunately, this year will only see a smaller Welsh squad of 13, but captains Carissa Turner and Jenny Green said they are extremely happy to have retained enough players to continue to compete.

“We had a huge improvement from finishing last in 2018 to 6th in 2019 and we would love to improve on this result again this year and feel optimistic about achieving this after the success of the Wales team’s performance in Clover Cup last October.”

“There is only one women’s club in Wales, the Cardiff Panthers, so the majority of the team already train together and the Welsh players from Birmingham University joined them in the opening round of the WWE9sAFL (Women’s Wales & England 9s AFL) in May where they won both of their games.”

Off the back of some strong form, the Wyverns seem poised to have their best Euro Cup yet. With the country having recently qualified for its first FIFA World Cup in 64 years, perhaps this effort with inspire the Red Dragon to roar again in Edinburgh.

“The Welsh are a passionate bunch and we take a lot of pride in representing our country so the players are incredibly excited to compete.”

“We have a great mix of debutants and experience within the team and it promises to be enjoyable for all.”

This year’s women’s competition will see a return of the European Crusaders – a collection of players from various countries not able to represent themselves independently. The Crusaders have been a regular fixture across both the men’s and women’s competitions in the past and have always competed with determination and grit.

This year’s edition of the squad is made up of players from Northern Ireland, Croatia and Galicia.

Team manager, Tony O’Hagan, said the most important aspect of the competition will be bonding as a team and ensuring every squad member enjoys the day.

“We are entering the competition with no expectations other than that the ladies will give it their all,” he said.

The Crusaders always represent the epitome of European Aussie Rules. Being an amalgamation of multiple countries coming together under one name to compete perfectly underpins the cross-border unity AFL Europe loves to promote.

Further, this side will certainly not be in Edinburgh to simply make up the numbers. Teams from both Croatia and Northern Ireland put on very strong displays at Champions League, with a Northern Irish side coming runners-up when all was said and done. Additionally, the women from Galicia are relative unknowns, giving the squad an exciting x-factor.

O’Hagan said, “Most of the ladies are making their international level debut and it’s great to be at this tournament showcasing the work both they and their home countries have put into the development of footy in Europe.”