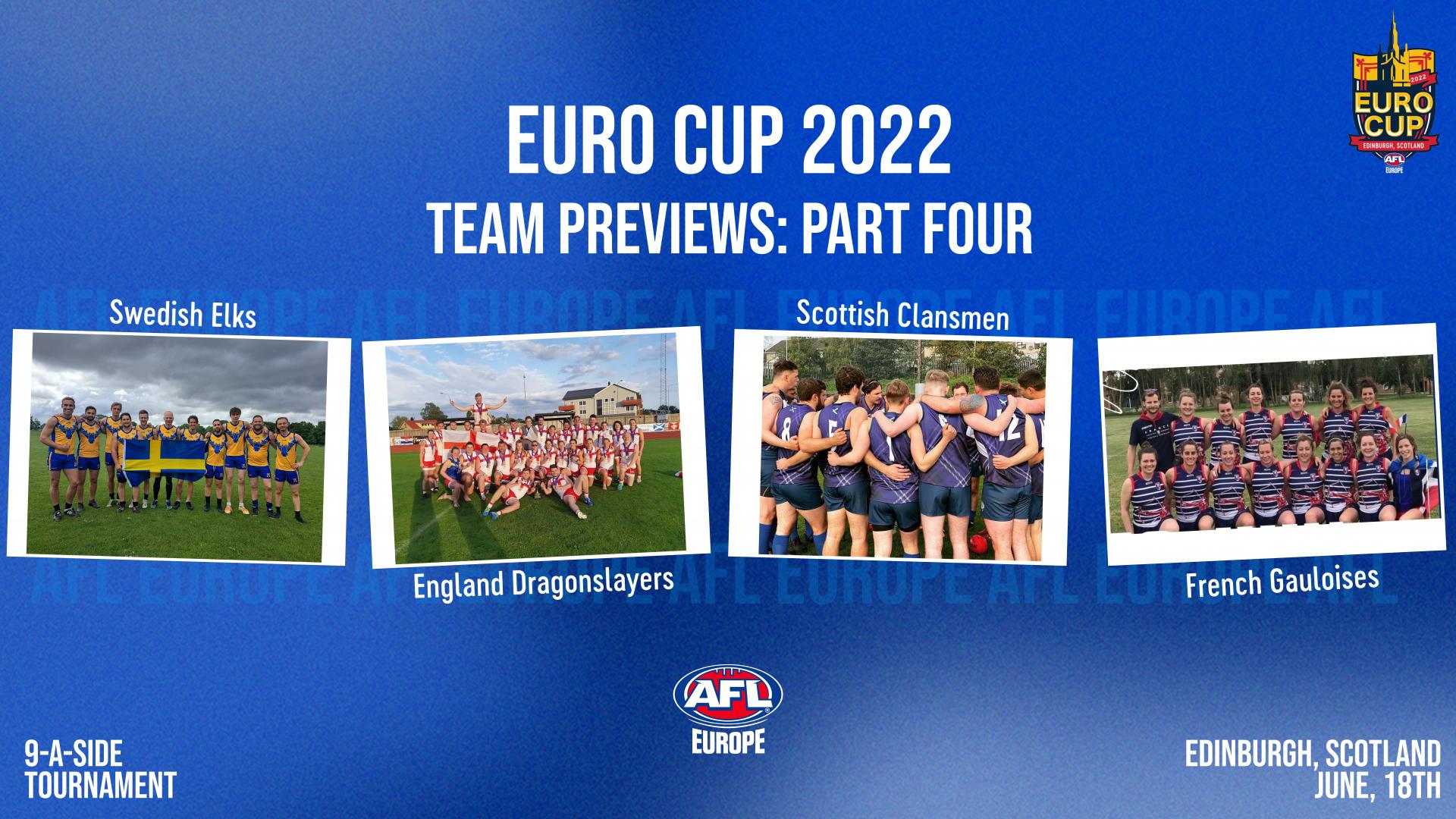 It’s less than a week until the Euro Cup makes its much anticipated return to AFL Europe’s year of events. This year, 23 teams will embark on a journey to Edinburgh, Scotland, where the event will be hosted at Edinburgh Leisure, across four grounds. With everyone itching to pull on their country’s respective guernsey for the first time since the pandemic, expect to see a thrilling day of highly competitive international footy. Reigning champs, England (men’s) and Ireland (women’s) will be sure to have a target on their backs.

Set to get underway on June 18, as always, AFL Europe will build up some media hype by previewing each respective outfit ahead of the tournament. In the fourth edition of our team previews, from the men’s competition, we take a look at the Swedish Elks, England Dragonslayers and tournament hosts, Scottish Clansmen. Additionally, from the women’s competition, we preview the French Gauloises.

The Swedish Elks are looking to build upon their 2019 performance which was hosted on home soil in in Norrtälje. The Swedish national finished fifth in that tournament and has been a consistent participant in the Euro Cup for over 10 years.

Elks’ coach, Leighton Rowsell, said of the squad, “We have a few senior players but are built around an exciting young core that love the game and will be around for a long time to come.”

“Sweden has been desperate to get back to top quality football as playing only internally, while being helpful for newer players, is less exciting for the top level of players.”

Immensely proud to be such tournament stalwarts, Rowsell said he understands they will always be underdogs but that’s just how they like it.

He said, “We are proud athletes and have always punched out of their weight division when it comes to sport.”

Sweden is one of the top ice hockey countries in the world and always does great in the Winter Olympics, especially when compared to the size of its competitors. Aussie rules is no exception and we are hoping to upset those much bigger countries. Kom igen Sverige!”

Looking forward to finally getting an opportunity to defend their 2019 victory, current trophy holders, the England Dragonslayers, have high expectations for Euro Cup 2022.

Team member, Andrew Cochran, said, “Expectations are most definitely high. We have a good mix of new faces and experienced players which look very strong. To be honest we think we can win it again and that’s exactly what we will try to do.”

Confident in his sides ability to go back-to-back, Cochrane said everyone is also looking forward to catching up with old friends and returning to the social aspect of AFL Europe’s events.

“As a whole we are excited to see the return of the Euro Cup because it’s always a top day (and night for that matter). It gives us all a chance to reconnect with friends and teammates from all over the country and let’s face it who doesn’t want to play for England.”

“I think for everyone, no matter what level or sport, it’s an honour to represent your country.

“There are a few new boys who will no doubt be super excited about the opportunity to play for their country for the first time and I don’t think that feeling goes away no matter how many times you have done so.”

Tournament hosts, the Scottish Clansmen, are excited to see the Euro Cup back in Scotland for the first time since 2012.

Team manager, David Baldie, said, “Since 2012 our domestic game has grown dramatically along with the skills and talent on show. We’re looking forward to welcoming teams from across the continent back to Edinburgh and our squad preparations have been ongoing since October when we participated in the Clover Cup in Belfast. That cup gave us the opportunity to try out players who had never participated in international competition, and every play gave a strong account of themselves.”

Satisfied with the depth and balance of his squad, Baldie said expectations are high, with every player incredibly excited to represent their country on home turf.

“We’ve got a really strong Euro Cup squad, with a great mix of domestic and international experience and there’s a really positive vibe amongst the players. We’ve got high expectations, but more than anything we’re aiming to go out and show our metal.”

“Our men’s team has participated in every Euro Cup since it started, with the exception of two, so we’re old dogs and that experience has given us good understanding of what to expect.

“We’ve made sure that we’ve done everything to make this tournament as special as possible and can’t wait to see old friends and make new ones over the course of the weekend.”

After a two-year hiatus, the French women’s side is excited to return to the Euro Cup for the eighth time. After finishing fifth in 2019, team member Bérengère said, “We expect to do our best after two years without a Euro Cup. We aim at finishing in the semis and goinf as far as we can. And obviously, we can’t wait to share some great moments with all the amazing footy community.”

Ready to reunite with some old friends, Bérengère said the niceties won’t stop the Gauloises from getting fired up and bringing their best footy.

“We are more than happy to be back both on and off the field with all the best players around Europe. We can’t wait to be in Edinburgh and fight against them for victory,” she said.

As with every other country, the French are ecstatic at the opportunity to pull on their nations colours and represent it at international level.

“It is always an honour to be able to represent our country and nobody will take the chance for granted.”

After a strong showing from the French women at the 2022 ANZAC Cup, expect them to be contenders this weekend.