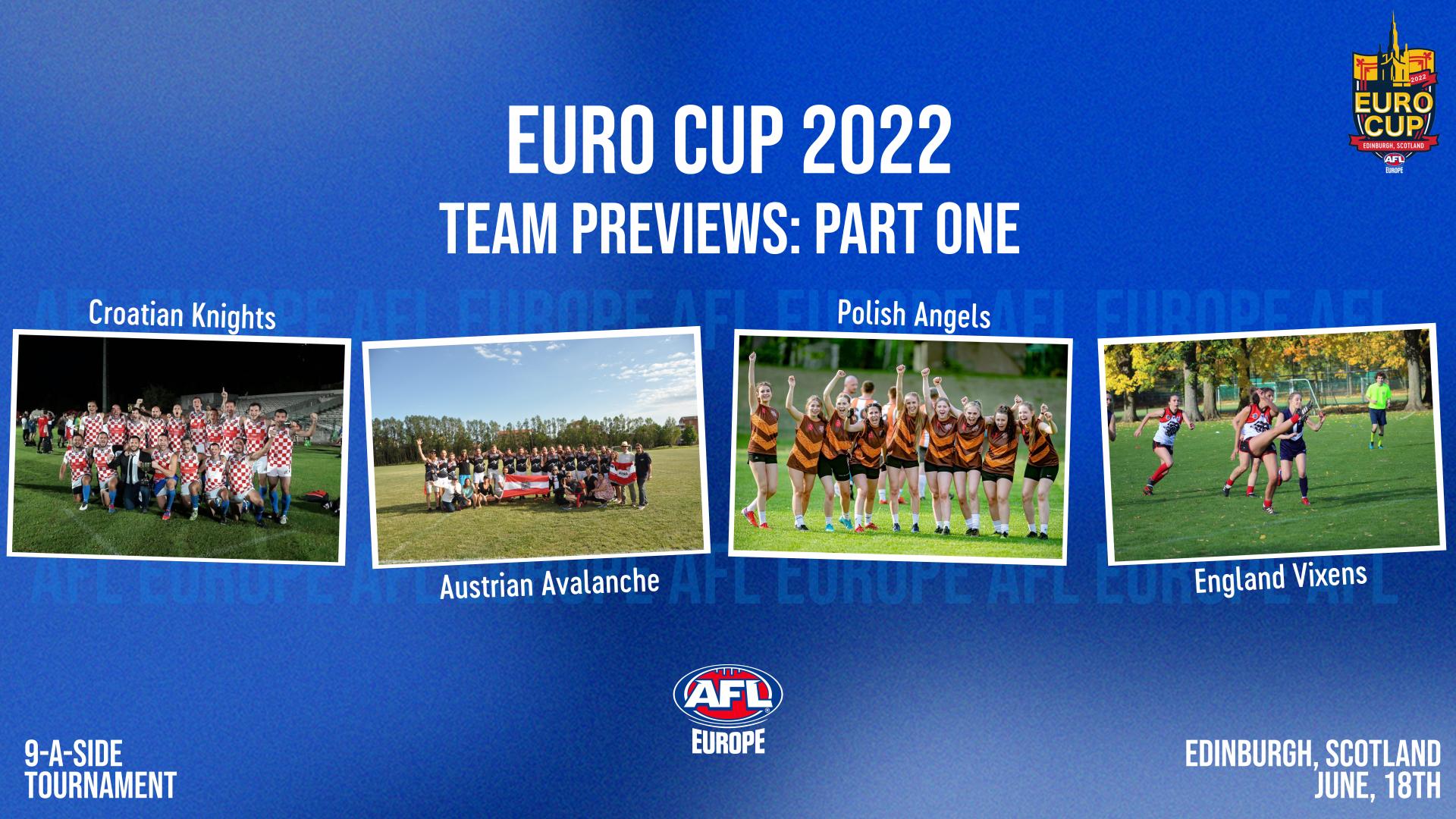 Set to get underway on June 18, as always, AFL Europe will build up some media hype by previewing each respective outfit ahead of the tournament. In the first edition of our team previews, we take a brief look at the Croatian Knights and Austrian Avalanche in the men’s competition and in the women’s competition we preview the Polish Angels and England Vixens.

Having not missed a Euro Cup since first joining in 2008, the Croatian Knights have high expectations for this year’s edition of the tournament after finishing sixth in 2019. Team member Josip Kravar spoke to AFL Europe, “we always have the same expectations for ourselves each year, to play and win. Our results depend on which team are we able to assemble and in the last couple of Euro Cups we were a shadow of our former selves.”

“This year however, after the pause caused by the pandemic, we are back on track with our full squad and are going for the flag. We rejoice in very hard, tough, and competitive play which is what will get us over the line.”

The Knights have been extremely competitive in former Euro Cups, winning the competiton twice and finishing runner-up on three occasions, so expect their “full squad” to be a formidable outfit.

“We are excited to be able to play in this tournament. It is a long tradition for us and we would not miss it. It is great to have this number of European nations in one place, playing, and after that, all enjoying and celebrating. Experiencing so much diversity and unity in one place is a great experience.

A tournament stalwart, Austria has played at every men’s Euro Cup so far, featuring in all 14 editions of the event. After finishing 15th out of 16 teams in 2019, the squad has set itself the benchmark of a top ten finish in this year’s tournament. Team member Martin spoke to AFL Europe, outlining exactly how his team plans to achieve this feat.

“First and foremost, we’re happy the Euro Cup is finally returning and we can meet and match-up with all the other nations.”

“I think our squad’s greatest strength is its experience. We have two players set to lace ‘em up for their 13th Euro Cup and four players in total with at least ten Euro Cup appearances – so many of us know exactly what to expect.”

Martin spoke of his side’s excitement to expand their horizons and match-up against some different opponents.

“There are just two teams in Austria and besides some additional friendly’s against teams from Croatia and the Czech Republic, there is not too much variety in terms of our opponents. So, it’s great to see different teams and different games styles and it’s exciting to find out how we can adapt to it.”

“The Euro Cup is what we train for every year – the two years without this goal in mind were hard. For us, this is a bis step back to some normality.”

This year, Poland will be sending a women’s team to the Euro Cup for the first time. It will also be the first time the Polish Angels squad assembles for a competitive match. The team’s presence at the tournament is undoubtedly a mark of AFL Poland’s hard work to grow the game and head coach, Roger Scott, spoke on the importance of and effort behind his team’s impending Euro Cup debut.

He said, “Most of our squad has been training for six months in the lead-up to the Euro Cup. Getting a squad to the Euro Cup is already a great achievement and the Angels could understandably be satisfied just with participation alone. However, our expectations are much higher than this.”

“Captained by our two leaders – Magdalena Maroszek & Victoria Bieniek – we have built a fiery and ferocious team of women from different clubs and sporting backgrounds. Do not let the “Angels” moniker fool you – we plan to come out and shock the competition with relentless pressure, drive and aggression. Win or lose – the Polish Angels will not take a step back, and we will make Poland proud.”

Unphased by being tournament debutants, Roger said his team is resolute in their aspirations and have done the necessary preparation to compete at the highest level.

“We’ve been competing regularly in international tournaments set up and run by us, and our mates in neighbouring countries such as Czech Republic, Austria, and Germany. Covid gave us an opportunity to get busy internally too – building current clubs and creating new ones. Most importantly, we’ve been bolstering female participation.”

“Traditionally we’ve always had one female player – Victoria – playing for the Warsaw Bison’s men’s team. But recently, the team from Fort Nysa, headed by Magdalena Maroszek, embarked on a female recruitment drive which has produced a full women’s team in Nysa. Word spread, and we also recruited several very capable women from Silesia, Lublin and more from Warsaw.

“The biggest motivation the Angels have for the Euro Cup is that they are representing their country. The main aim of our participation in the Euro Cup is to make Poland proud. We are a young footy association and a young team, but our Polish spirit means we will never stop fighting and trying. At the end of the tournament, we will hold our heads high.”

England has participated in the Euro Cup since the women’s side of the competition was first introduced in 2014. Of those six tournaments, the Vixens have won twice – most recently in Bordeaux in 2017. Having been runners up in the other four tournament appearances, the Vixens are sure be on the hunt for victory.

Team member Vicky Jones spoke about the team’s expectations and plans to restore its winning ways at Euro Cup 2022.

She said, “Having had two years away from the tournament, due to covid, we are hungrier than ever to compete internationally again. The Vixen’s last run out was in The Clover Cup hosted by AFL Ireland in 2021.”

“With regards to the pandemic, we have to take the positives – there is a new thirst for the game, and we have attracted players from all different sporting backgrounds, which brings new talent, perspective, and skills to the game.

“In addition to this, we have a new management and coaching team that have emerged over the last year. Head Coach Andrew Lambropoulos and Assistant Coach Dominic McInerney have come in and solidified our strong foundations, allowing us to bring a new brand of footy to the tournament.”

Vicky said she expects to see a higher level of competition at this year’s tournament and is ecstatic to see new teams joining and continued growth.

“The competition is getting more and more fierce and that is what the European AFL needs to keep it fresh, exciting, and attractive to more and more players.”

“It means everything to be back playing in the Euro Cup. You can’t beat that feeling of hearing your national anthem and singing it proudly as you represent your country. There are over 14 competitive women’s teams in England and making the squad is a huge achievement. Our team has a wealth of experience, fresh legs, a willingness to learn and we are ready to put it all to battle.”