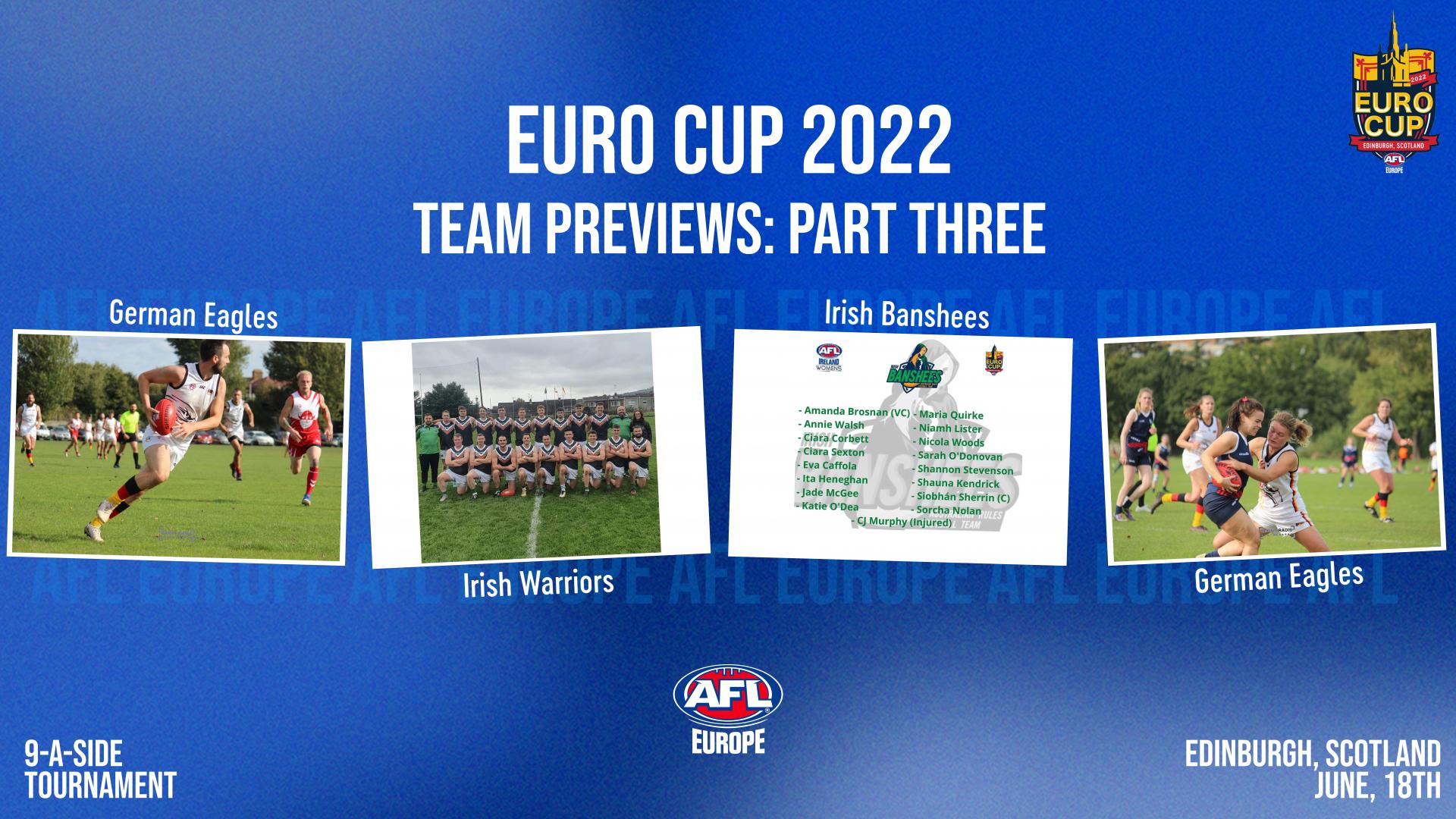 Set to get underway on June 18, as always, AFL Europe will build up some media hype by previewing each respective outfit ahead of the tournament. In the third edition of our team previews, we take a look at the German Eagles men’s and women’s sides, as well as the Irish Warriors from the men’s competition and reigning women’s champs, the Irish Banshees.

Returning for what will be their fifth Euro Cup appearance, the German Eagles are keen to throw themselves back into international competition for the first time since 2019, where they finished an impressive third place.

Team President, Manuell Gauding, said the time off allowed the squad to focus on improving their weaknesses and maintaining their strengths in order to better compete with the top end of the competition.

“We have had the time to focus on our fitness levels so we can better keep up with teams such as Ireland and England, who outlasted us in 2019,” he said.

“These are the teams we are targeting and who we want to beat.”

This year, the Eagles squad’s greatest strength is its mix of youth and experience.

“We have a lot of young players who with the right mixture of experienced players bring together a very strong national team. We know the competition will be challenging but we are looking forward to the challenge of reaching the finals.”

Manuell reiterated the positivity the team feels about returning to international competition but said the Covid restrictions currently still in force in Germany have been difficult for the team to navigate in tandem with its tournament preparation.

He said, “For us, COVID restrictions are still quite present in Germany, with many rules and regulations in force. Of course, we are happy to be able to travel to tournaments again, but we are still experiencing how players test positive and have to stay in quarantine for the minimum of five days.”

“Trying to keep players motivated to keep going in their preparations has been difficult with tournaments being postponed.

“With that said, in 2019 both our national teams came home with the bronze medal – we  hope to achieve that goal again.”

A mainstay of the business end of the tournament, the Irish Warriors are always in the mix at the death. However, it’s been ten years since they last took home the trophy – way back in Edinburgh in 2012. But with a new coach and management team at the helm and an array of fresh talent injected into the side, senior coach Eoin O’Sullivan has high expectations for Euro Cup 2022.

“Trials were held around the country, and upwards of 50 players put their hands up for selection. The Warriors hope that the selected squad – a mix of experience and fresh, enthusiastic players – will meet the required standard to compete with the best in Europe,” O’Sullivan said.

“It’s a big date in our calendar each year, and one that every player looks forward to. Euro Cup experiences and memories are ones that last a lifetime.

“It has been a long, long break without International Footy, and this is a welcome return to competition. A lot has changed over the last few years; players, coaches, new teams, but getting back to the consistency of AFL Europe competitions is what everyone has been looking forward to.

For players and management, it provides the opportunity to test yourself against the best in Europe and see where the standard is. The pride of representing your country at Euro Cup is unrivalled, the respect among teams is huge, the games are intense and tough and the fun off the field thereafter is what brings it all together – it’s the pinnacle of playing AFL in Europe.

“To be selected to represent your country is both an amazing achievement and humbling experience. You can be sure that whoever you meet on the field, they are brimming with pride too, and will give their all a every contest all day. The one-day competition, the shortened games, the 9s format – they are all challenges in themselves, and it’s what makes the Euro Cup special.”

Perhaps the strongest international Aussie Rules outfit Europe has ever seen, certainly the most successful, the Irish Banshees are back and hungry to pull off a belated three-peat after winning the Euro Cup in 2018 and 2019.

Since joining the competition in 2010, the Banshees have won the tournament seven times and have established themselves as the team to beat each year.

Team member Shane said the squad is not intimidated by anyone’s expectations and knows his team will rise to the occasion, despite plenty of personnel turnover occurring in 2021.

“This competition in the past has been an outstanding tournament for us,” he said.

“At the start of 2021, new management took the reins of the Irish Banshees and since then, a lot of work has been put in to reach our goals and marking off our objectives.

“This management has been keeping a close eye on all women interested in wearing the green jersey and has selected the best for this tournament – I trust that we’ll come back with a triumph for ourselves and for our country.”

The prestige of representing such a successful team is not lost on any of Ireland’s team members. With so much internal competition for spots, it’s difficult to imagine anyone arriving at the tournament with an outfit hungrier than the Banshees.

“I think the moment when you are named on a national squad and receive your jersey for the tournaments is when you realize that all the hard work you’ve put into earning that jersey has paid off – and the feeling of pride is bigger than ever,” Shane said.

“However, the job is never over! Not only do you need to work hard on a personal level, but you also need to be working extra hard with your teammates on and off the pitch as that is the only way to achieve great things. We all need to be on the same page.

“Overall, we are all looking forward to this tournament and grateful we are a part of it.”

Much like their male counterparts, the German Eagle’s female outfit finished third in 2019’s Euro Cup, which was their second time at the tournament. Returning for their third attempt at glory, the German side has high expectations.

Team President, Manuell Gauding, said, “The women’s team expecting this year’s European cup to be a battle of both physical and mental strength after a two-year hiatus.”

“We are expecting the games to be fast paced, physically demanding and completely exhilarating. This year the team brings together the experience from the veterans with the talent and eagerness of the debutantes for a well-rounded line up.”

Gauding spoke of AFL Germany’s feeling of pride towards this year’s edition of tournament, being the first time both national teams will wear the official German eagles of the republic of Germany.

He said, “The German eagles is the federal coat of arms. Both our teams will represent the eagle with proudness and will fight for glory with the eagle on their chests.”

“All our players are proud to represent their country in the colours black, red and gold.”