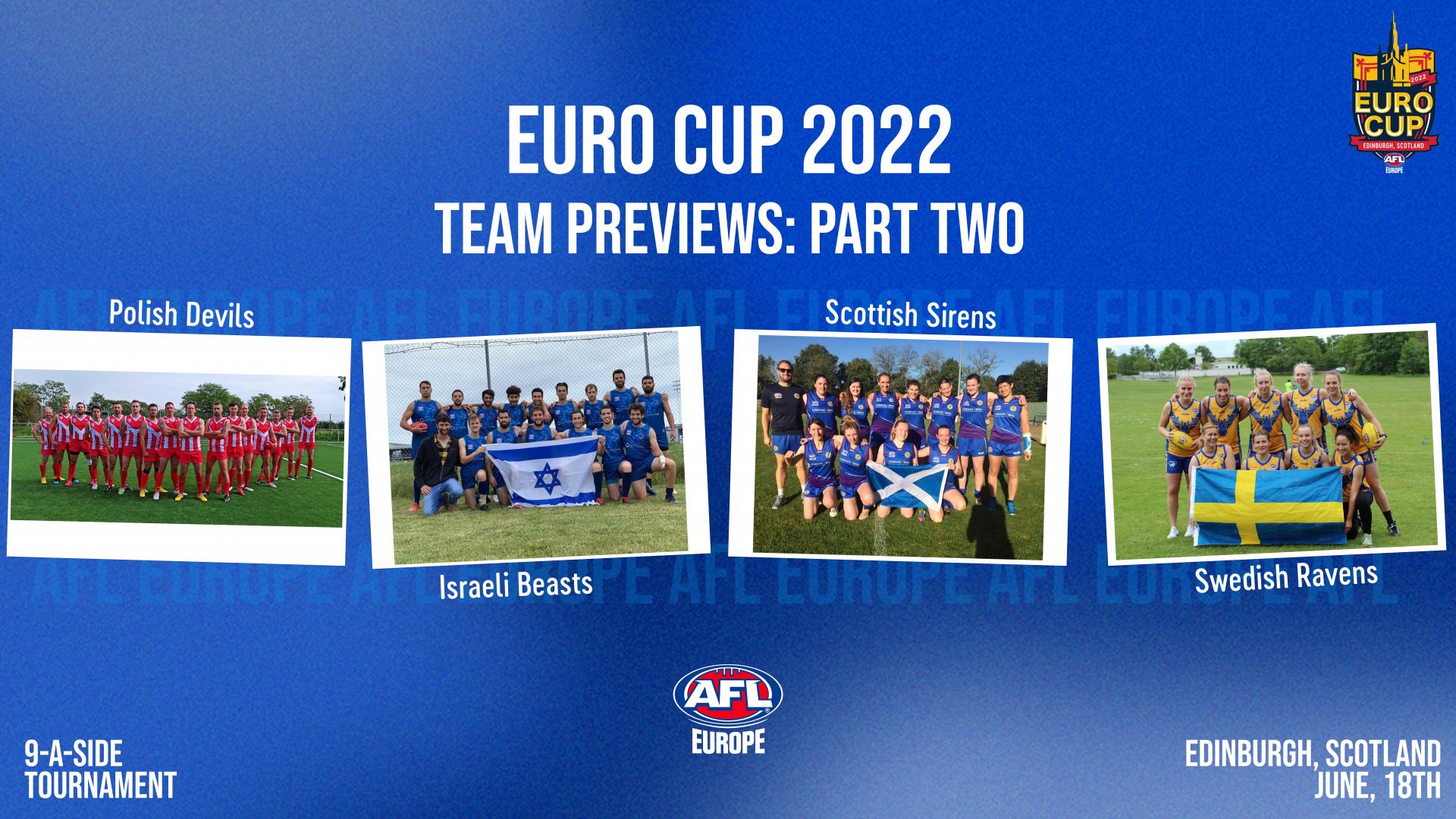 Set to get underway on June 18, as always, AFL Europe will build up some media hype by previewing each respective outfit ahead of the tournament. In the second edition of our team previews, we take a brief look at the Polish Devils and Israeli Beasts in the men’s competition and in the women’s competition, we preview tournament hosts, the Scottish Sirens, and the Swedish Ravens.

Returning to the Euro Cup for just the second time after making their debut in 2019, the Polish Devils can only improve after finishing 16th in their tournament debut. Team member Phil Forbes said the break between Euro Cups has afforded the squad plenty of opportunity for internal growth and development.

“Only two players on the team will be making their 2nd Euro Cup appearance, but every other player has spent the last two years playing every game that AFL Poland has presented them, both domestically and with our friends elsewhere in other parts of Europe,” he said.

“We expect that the Polish team will repeat the efforts and ferocity they brought in 2019, but this year having it backed up by skill, discipline and strategy – something we lacked in 2019 and something we’ve made a conscious effort to address since then.

“In terms of results, we’re hoping to make significant inroads and move up the table, but we’re also aware that we’re in a pool with some incredibly talented teams and that every other team has had the same amount of time to prep for this as we have. Nothing will be easy, but we’ve got a lot on our side that we didn’t have last time.

“The team that played in 2019 made history, now we’re out to make a statement. The Polish Devils will also be spurred on by the Polish Angels, the women’s team who are making their debut.”

As an emerging team, Phil spoke on the excitement to be returning to Euro Cup competition with both a men’s and women’s team.

“The Euro Cup is the biggest date on our calendar. It’s a date that shows off the results of our efforts to grow domestic teams, create a league, foster the growth and development of our players and build the community within Poland.”

“It’s a chance to show our players that they’re genuinely part of something so much bigger, both on the field and off the field.”

Israel’s Tel Aviv based outfit will be playing in its third Euro Cup this year and expectations are higher than ever. Finishing 13th in 2019, the squad has set a high bar for success in 2022, expecting nothing less than a top eight finish.

Team member Shir said the squad has been starved of opportunity, being the only active team in Israel which currently has no domestic Aussie Rules league.

“Euro cup is the big event we’re waiting for each year, and this time around it’s been a long wait,” Shir said.

“Obviously it means a lot to play for our country and represent it in Europe. Having previously represented Israel in the Euro Cup with a team based in Jerusalem, our Tel Aviv squad has been proud to carry on their legacy these past couple of tournaments.

“To be putting on our country’s colours on the biggest Aussie Rules stage in Europe is huge and we’re so excited to finally be back in business.”

Fired up and tired of waiting around, Israel clearly can’t wait to unleash the Beasts – let’s hope the rest of the competition is ready.

The Scottish Sirens are set to return to the Euro Cup for the first time since 2018. It will be the fifth appearance for the Scotland women’s squad and head coach Sian Furniss said she is excited to lead the team into its first major tournament since the pandemic, particularly because the competition is taking place on home soil.

Furniss said, “With the continued growth of women’s footy in Scotland, the team is looking to be competitive and showcase some of the new and exciting talent coming through.”

“It is fantastic to have competitive footy back in our lives. We are really excited that the 2022 edition of the Euro Cup is being hosted in Scotland. It has been 3 years in the making with the postponement of the Euro Cup in 2020 and 2021.

“We are hoping everyone has a great day of footy and enjoys visiting ‘the best small Country in the world’.

Squad member Stacey Baker-Hughes had this to say about the upcoming tournament: “It is always a great honour to be able to represent my country. I have so many great memories from Euro Cups over the years.”

“I have played in five Euro Cups, firstly for the European Crusaders in 2012 before the Sirens were formed – that tournament was also hosted in Edinburgh.

“It is so nice to be back at the Euro Cup in our capital city and this time being able to pull on the Scottish jersey. Playing for Scotland will always be special and it is a great feeling welcoming the footy community in Europe to Edinburgh for what promises to be a great day.”

Following a mid-table finish while hosting the tournament in 2019, the Swedish Ravens are returning to the Euro Cup with more important things than results on their mind. Head coach, Daphny Bergqvist said, “After two years of covid restrictions taking their toll on players, what we are most looking forward to about this year’s Euro Cup is not the results, but getting together the Ravens again and playing footy against the best players in Europe.”

However, despite the modest expectations, Bergqvist admitted the Ravens competitive fire means they can’t help but be on the hunt for victories – especially after narrowly missing out on a top three finish in 2019, losing the third-place playoff match against Germany.

“Of course, we want to win some games as well! Our goal is to reach the finals and take home a medal, which we missed out on at our home tournament last Euro Cup in 2019.”

After making their debut in Croatia in 2015, this will be the Ravens fifth Euro Cup. Bergqvist said the thrill of representing your country never gets old and the team is excited to once again be donning on the blue and yellow on the international stage.

She said, “It’s always an honour to represent Sweden as part of the Ravens. The players are very excited to go travelling again with the best the country has to offer and see how we stack up against the rest of Europe.”