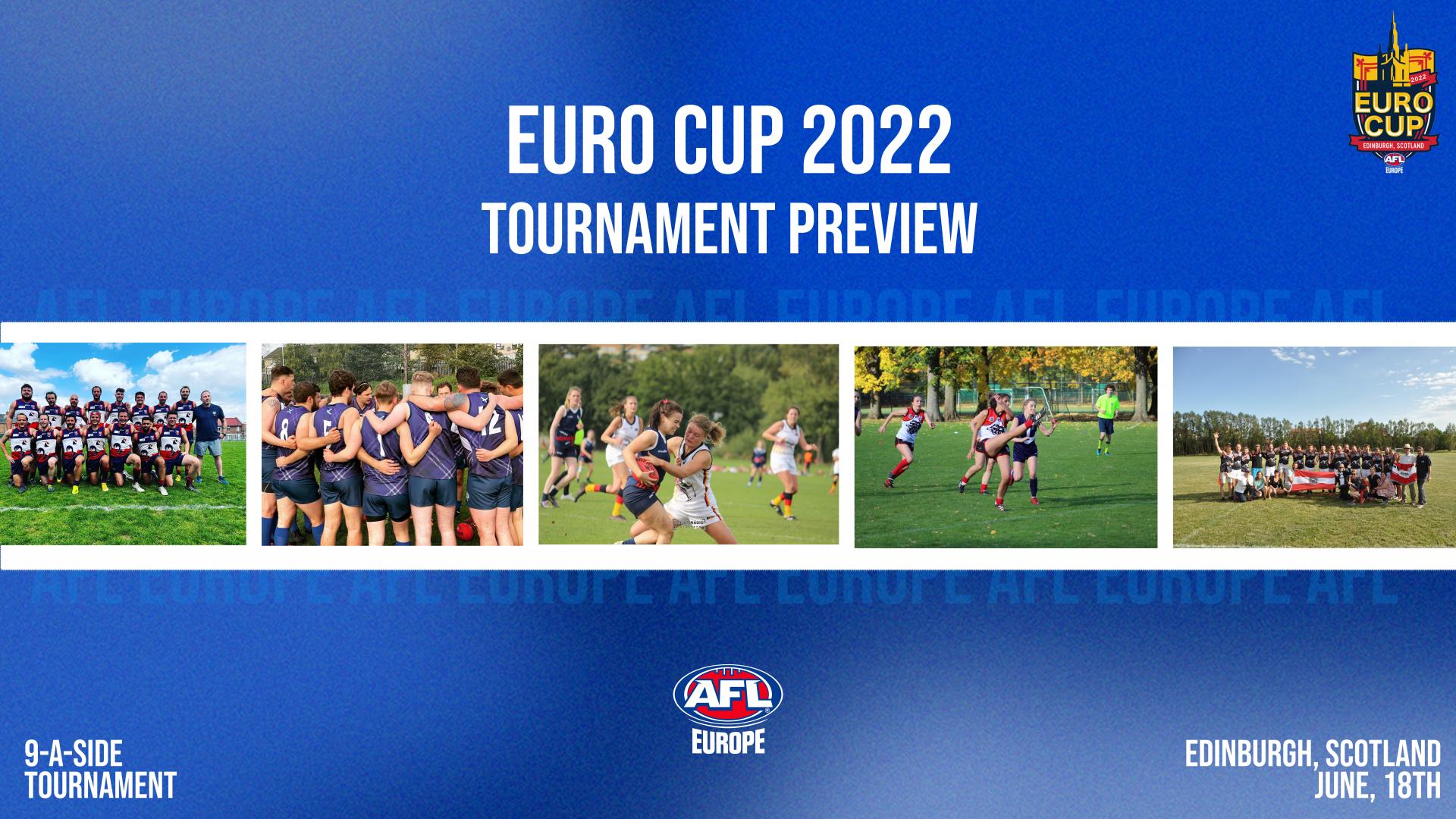 The 2022 Euro Cup will take place tomorrow, Saturday June 18th in Edinburgh, Scotland. Across both the men’s and women’s competitions, 25 teams will be competing, an amazing result considering the challenges posed to many countries’ footy teams during the Covid-induced hiatus.

As always, the tournament will be 9-a-side, with squads battling it out to earn bragging rights as the best international team in Europe. Games are set to get underway at 9am local time, with the final match set for 6:45pm before presentations commence at 7:30pm.

The return of the Euro Cup has been a long time coming and with over 400 players, coaches, volunteers and fans in attendance, it’s poised to be one of the best editions of the tournament yet.

So, with one of the biggest events on the AFL Europe calendar almost upon us, here is how the respective competitions are shaping up.

In Pool A of the men’s draw is reigning champs, the England Dragonslayers, tournament hosts, the Scottish Clansmen, as well as the Flying Dutch and Israeli Beasts. The Dragonslayers will be the team to beat after winning it all in 2019 but expect some fierce competition. The Clansmen will be a big challenge for anyone on home soil, desperate to earn some silverware as tournament hosts. Moreover, both the Flying Dutch and Israeli Beasts won’t go down without a fight – especially after such a long wait between tournaments. The two perennial midtable teams have a great opportunity to knock-off some of Europe’s strongest sides early in the day and set themselves up for a deep finals run.

This year’s mega-pool is Pool B, made up of five teams including the Irish Warriors, French Coqs, Welsh Red Dragons, Swiss Wolves and Polish Devils. Form suggests that 2019 runners up, Ireland, and fourth placed France will be among the stronger sides, but with so much time between tournaments it’s risky putting too much stake into previous performances. However, the Coqs put on a strong display in April’s ANZAC Cup which has them making a strong case to be among the top two when the pool games are complete. The Red Dragons are a dark horse after a strong showing from its university sides in Cardiff earlier this year and as always, the Swiss Wolves will be the hunters and not the hunted. Although it’s just Poland’s second Euro Cup, the growth the country has seen in Aussie Rules since 2019 has been immense and suggests this year’s side will be far superior to 2019s. It’s anyone’s game.

Over in Pool C, the German Eagles, Croatian Knights, Swedish Elks and Austrian Avalanche will clash. This pool is perhaps the most exciting of the bunch, seemingly the most even on paper. Germany, Sweden and Croatia have been tournament stalwarts for quite some time and will know what to expect from their respective opposition. All three of those sides have also consistently finished in the top half of the tournament, meaning someone will leave the group stages immensely disappointed, nonetheless, the evenness of this group has created a great opportunity for these teams to do well. Austria will be back for just the third time at a Euro Cup tournament, however, don’t sleep on the Avalanche as they have been working extremely hard over these past couple of years to put up a good fight in this year’s edition of the tournament and improve upon their 15th place finish in 2019.

On to the women’s pools. Pool A is made up of the England Vixens, French Gauloises, Netherland Women and Polish Angels. The Vixens will be hungry to go one better this year after finishing as runner-up in Sweden. However, returning to their winning ways won’t be easy. The French Gauloises recently had a competitive match-up against the Australia Spirit in Villers-Bretonneux, France, where they put on a good show against a tough opposition. Then come the two unknowns’, the Dutch didn’t bring a women’s side to the Euro Cup in 2019 and Poland only just recently hosted its first ever women’s game on home soil. So, what can be expected from both of these sides? We have absolutely no idea, which is a scary proposition for their opposition. Expect fans to flock to this group’s matches and watch them with keen eyes.

Some enticing storylines exist in in Pool B, which is made up of the reigning champs, Irish Banshees, the German Eagles, Swiss Heidis and European Crusaders. The Banshees are obviously the team to beat here. Yes, 2019 was a long time ago but the Irish side is always extremely competitive at the Euro Cup and rarely misses out on a Grand Final birth. Attempting to slow them down will be the German Eagles, who are endeavouring to win silverware for a second tournament running. For the Swiss, its focus will be on improving upon its seventh place finish in Sweden, which will require the Heidis to go up a gear in terms of their play – something this team is more than capable of. Finally, the European Crusaders could finish in any position and it wouldn’t be a surprise. As with any team made up of players from different countries, how quick they can come together and form some strong bonds will be pivotal to their success on the day – let’s see how it pans out.

The only three-team pool in this tournament, the hosting Scottish Sirens will be joined by the Swedish Ravens and Welsh Wyverns. Scotland missed out on the women’s edition of the Euro Cup in 2019, so will be chomping at the bit to return and playing on home soil will only serve to strengthen their resolve to put on a good show for the local fans. Sweden narrowly missed out on silverware last time out, losing the third-place playoff in a nail-biter. Can the Ravens go one better in 2022? Only time will tell but they’re certainly a good chance of topping this pool and setting themselves up for success late in the day. Finally, the Welsh Wyverns could surprise a few, particularly considering their strong 2022 form. The squad is fresh off the end of their domestic season and put on a terrific show at this year’s Clover Cup. There’s nothing to stop any of these teams going undefeated through the pool games, it will simply be a matter of who wants it more on the day.