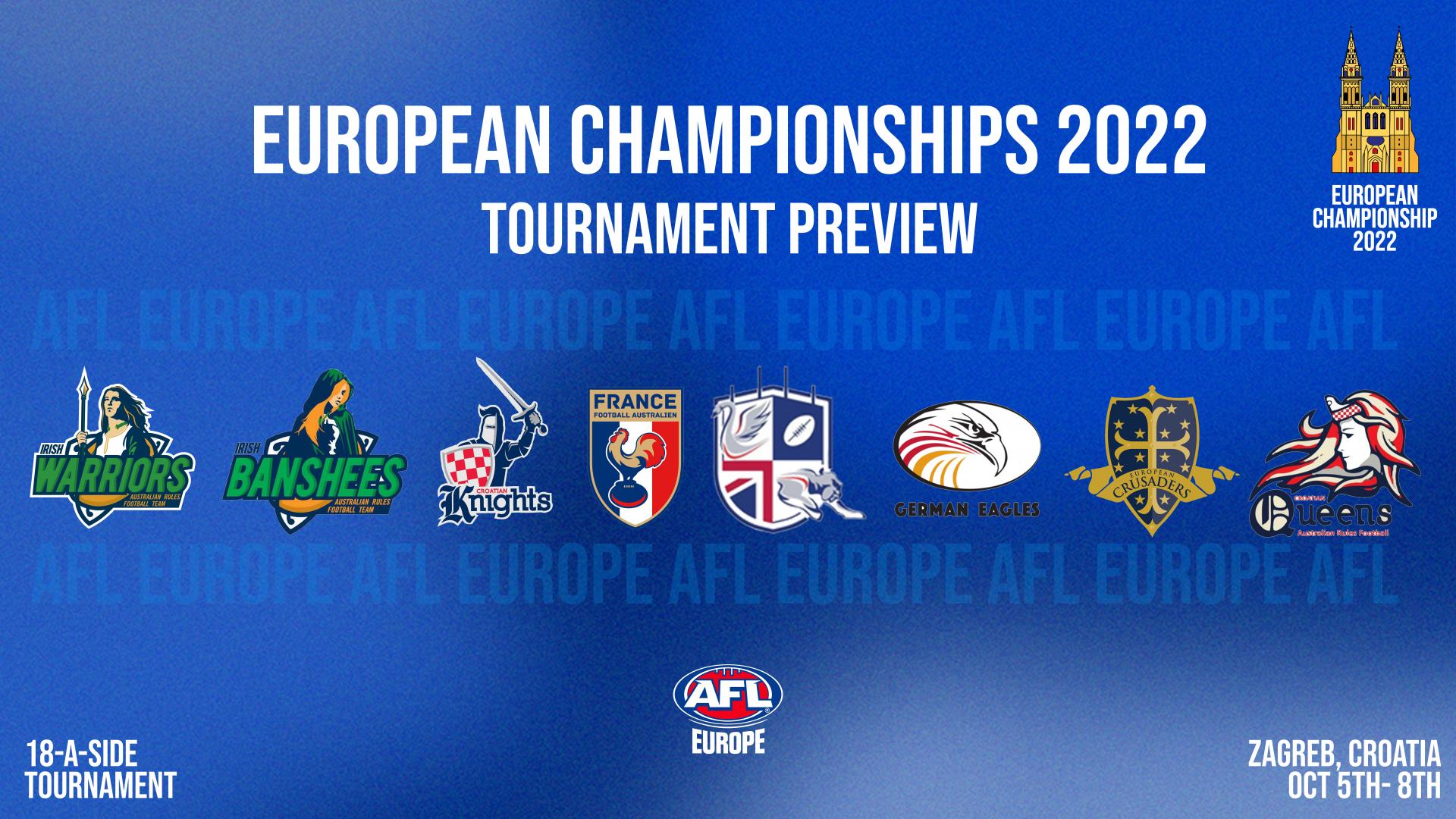 The 2022 AFL Europe European Championships are less than 24 hours away and we hope you are just as excited as us!

This year, five men’s and five women’s teams will descend upon Croatia’s capital city of Zagreb to see who will be crowned Champions of Europe at the University of Zagreb’s brand-new full-size AFL ground.

European Championships occurs once every three years, so the tournament is one of AFL Europe’s most coveted. It also happens to be our only 18-a-side international event, a form of the game rarely seen across Europe as most countries tend to favour nine-a-side.

The change of codes to is a difficult switch for many countries to make, as teams must grapple with varying levels of 18-a-side experience, bringing a level of unfamiliarity to the tournament. However, the switch of codes allows teams more freedom to employ new tactics and game styles. The longer matches are also more demanding physically and require far greater squad depth and general AFL experience and I.Q than 9s.

This mixture of factors always makes for exciting footy and you can rest assured that EC22 will be no different. Expect high intensity, immense physicality, sharp skills and a healthy level of competitiveness from each and every player.

Excitingly, both 2019 Champions are returning to defend their crowns. In the men’s division, the Great Britain Bulldogs are hoping to complete a three-peat of wins after securing victory in 2016 and 2019, while the Irish Banshees are hoping to double-up after their 2019 success and follow on from their nine-a-side win at Euro Cup in Edinburgh earlier this year.

However, there will be plenty of competition for these two reigning champs and every single country and team competing should be considered a legitimate contender to emerge victorious at the end of the four action packed days of footy.

Croatia comes into the tournament after both its men’s and women’s sides put in strong showings at Euro Cup in Edinburgh, the Knights especially, who finished fourth overall and narrowly missed out on a Grand Final birth. Further, EC22 will be the Queens debut Euro Champs, so expect them to be extra fired up in front of the home crowd.

Both German sides have taken great strides over the Covid period and improved leaps and bounds from where they were in 2019 – as have the Irish Warriors and GB swans. Finally, the French Coqs and European Crusaders have been just as competitive as anyone else in the past six-months, but haven’t quite fulfilled their potential – maybe Euro Champs and the 18-a-side format will be when it all comes together for the French?

All in all, nothing will come easily for anyone and the Irish Banshees and GB Bulldogs will have their work cut out for them if they are to retain their respective titles.

Everything gets underway on October 5th, with day 1 kicking off the first of our round-robin style match-ups between the five teams in the respective men’s and women’s competitions. By the conclusion of day 2, all teams will have played each other once in short-form 40-minute matches broken into 20 min halves. This will decide who gets knocked out and which remaining four sides will play off in finals.

All games will be available to watch via livestream, which will be broadcast via AFL Europe’s YouTube channel and shared all around the community and beyond. Excitingly, for the first time, select round-robin matches and finals will have live commentary alongside the broadcast. Stay tuned via our social media channels to stay up to date with all the latest news, results, fixtures and highlights across the four days.

Whether you’ll be keeping up with the tournament from near or far, we can’t wait to enjoy everything that’s about to take place with you and of course, best of luck to all countries competing!