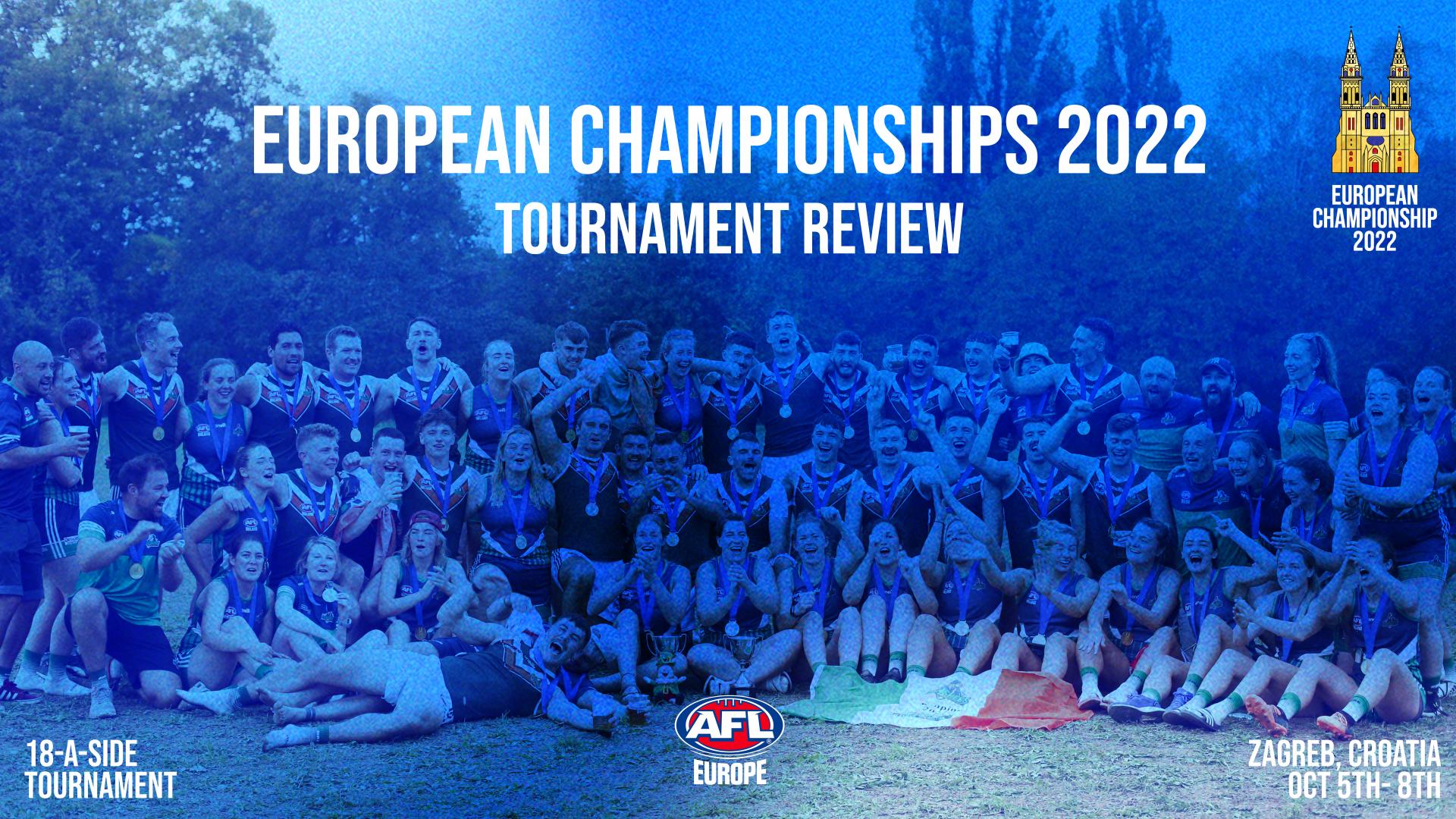 Following four days of exceptional footy in Croatia’s capital city of Zagreb at the ZVG (Zagreb Footy Ground), it all game down to a big Saturday afternoon of grand finals. In the women’s GF, the reigning champion Irish Banshees clashed with the Swans of Great Britain, while the men’s big dance was played out between the Irish Warriors and French Coqs.

Before we dive into results, let’s review what built up to those two final clashes. The tournament commenced on Wednesday with clear skies and sunshine – a theme which persisted for the duration of the week. Despite the heat, the ZVG’s turf managed to hold up well for the duration of the event, a testament to the hard work of our Croatian volunteers.

Across the first two days of match-play, games were played in a carnival style format of 20-minute halves before moving on to full, four quarter 80-minute matches for finals across Friday and Saturday

For many squads, European Championships presented an opportunity for a rare foray into 18-a-side footy, moving away from the 9-a-side format often favoured across Europe. While for others, like team GB, they were hoping to capitalise on their superior 18s experience against teams still in their full-format infancy.

The pool stages of the tournament saw the Croatian Queens make their EC debut, which was marked by a monumental win over the European Crusaders on day 2. The Crusaders themselves, made up largely of the French national team, put in an immensely impressive effort considering the challenges they faced putting a team together. However, unfortunately for the Crusaders, their defeat at the hands of the Queens and subsequent losses to the rest of the competition saw them bow out of the tournament after the second day.

In the men’s side of the competition, it was the German Eagles who went winless on the field and were subsequently eliminated, but they certainty won off the field. Despite struggling with their own play, the Eagles men’s side deserves a huge amount of credit for the way they supported their female counterparts during their finals campaign, as well as for the general encouragement and positive atmosphere they spread amongst the hundreds of fans in the stands.

Following the pool matches and semi finals, we were left with two sides from each division playing off for third place, and some highly sought-after silverware.

In the women’s, both the German Eagles and home-town Croatian Queens were defeated in their respective semi-finals, so a date to battle it out for third was set for Saturday morning.

The Croatian Queens had the home support behind them, however, the Eagles proved to be the side better prepared for the big occasion, jumping out to an early lead from which the Queens couldn’t recover. Despite a valiant effort from the hometown side to reel the Germans in, the deficit was too much and the Eagles won by a margin of 33 points, earning themselves a bronze medal. It was an incredible tournament for the Germans, who have improved leaps and bounds in recent years but credit must also go to the Queens, who just a matter of months ago were still trying to pull together a squad – we all have high hopes for the powerhouses these two young sides may have become ahead of EC25 in three years time.

In the men’s side of the tournament, it was the Croatian Knights who met the consecutive reigning champion GB Bulldogs in a battle for third.

The clash was by far the most physical of the tournament, as both sides possessed several big bodies who were unafraid of throwing their weight around. A raucous home crowd ensured the Knights pushed the Bulldogs all the way and were right in the game at half time, something many pundits didn’t expect.

In the second half however, the class and experience of the Bulldogs shone through as they proved too strong for the valiant Croatian side. In the end, the Bulldogs ran away with the victory by 57 points, ensuring that, although their streak of EC victories came to a close, they didn’t leave empty handed.

The first three days of the tournament were action packed, with close contests, a number of upsets and plenty of fanfare but one theme persisted – Irish dominance.

The Irish Banshees put the women’s competition on notice right from the start, not conceding a single point throughout the pool stages, nor the semi-final. The GB Swans were similarly dominant throughout, baring their initial meeting with the Banshees where they were unable to score.

So, heading into the women’s grand final the Banshees were understandably favoured, though would have to deal with the weight of pressure – how you got to a grand final becomes irrelevant if you’re unable to finish it off.

Nerves appeared to have gotten to the Banshees, who were untidy in the early stages of the first term, but the Swans were unable to capitalise and when the tide turned, a green wave overcame GB and the Irish asserted their dominance. Proving themselves to be the best, the Banshees went on to win comfortably, the British however, will take great pride in not only scoring against the Irish, but converting one major to end their perfect defensive execution.

Nonetheless, the Banshees were the deserved winners, retaining their EC crown with a 115 point win and finishing off their perfect year claiming both the Euro Cup and now the European Championships.

The men’s grand final was a more competitive affair, also with the Irish favoured to win but the French weren’t going to make it easy on them. Enjoying a dream run as underdogs, the French Coqs managed to do what the Warriors couldn’t, defeat the GB Bulldogs – twice.

The fairy-tale finish looked well and truly on the cards at the beginning of the contest, with the French jumping out to a 15-point lead. By half time, the Warriors had come all the way back and managed to claim a three point advantage at the main break. They had the French reeling and it looked as if they were all set to run away with the game following the Coqs hot start.

The French once again proved their metal, coming back at the Irish to force a four-quarter performance from the favourites and with just ten minutes remaining in the final term, only six points separated the two sides, with the Warriors clinging to the lead. From here on out however, the Coqs finally ran out of steam and the Irish ran away with the game, winning by 25 points and securing a well-deserved international tournament win.

Not only are congratulations in order to the Irish for doing the EC double, but also to our runners-up, third place victors and all remaining teams for putting on such a show. At times this four day tournament felt like a true festival of footy and every spectator – both near and far – soaked up the spectacle, whether that be in person or via the livestream.

AFL Europe would like to extend a huge thank you to the Croatian Knights for hosting, the Croatian Ambassador to Australia Mr Andrea Biggi, Head of Mission, for their support, as well as all of our players, coaches, umpires, volunteers and fans – without you, these international tournaments wouldn’t have been possible.

Finally, don’t forget to head over to out YouTube channel – AFL Europe – where you can catch replays of each and every game.

Women’s Team of the Tournament

Men’s Team of the Tournament