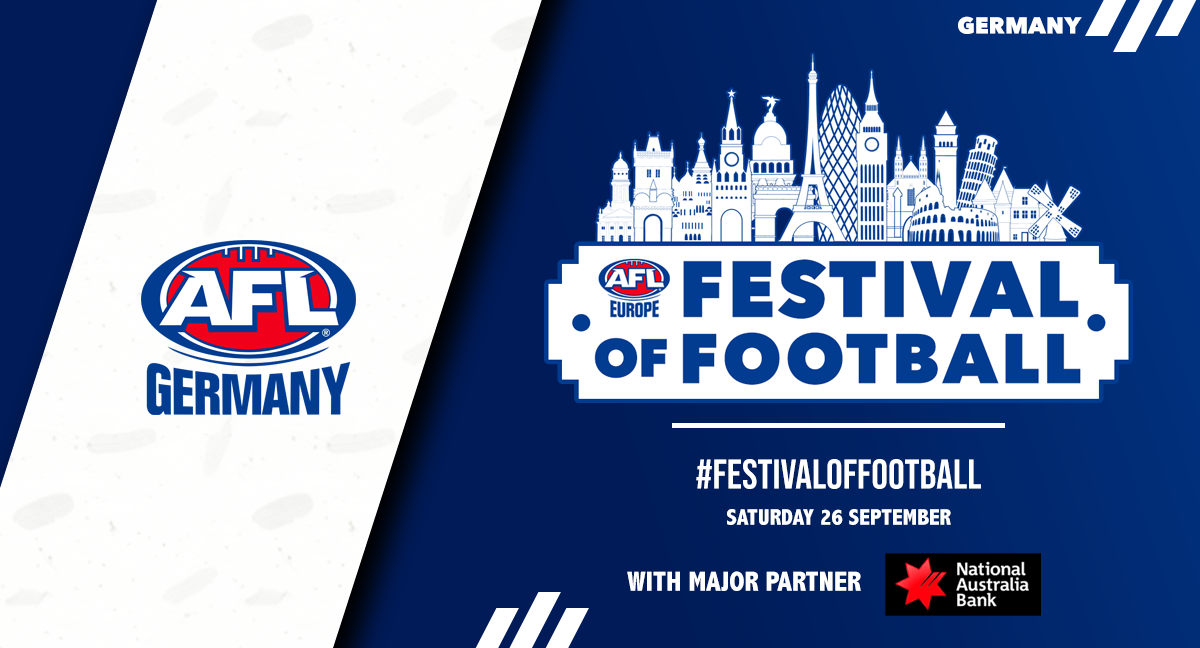 AFL Germany look forward to hosting two tournaments in two different cities in the Festival of Football on September 26th.

The men’s tournament will take place in the country’s capital, Berlin, and the women’s where the newly formed Quokkas are based, Leipzig.

Both tournaments will feature four teams in a 9-a-side format.

The women’s tournament in Leipzig will include the Berlin Crocodiles, Hamburg Dockers, Rheinland Lions and a mixed team made up of players from Dresden, Heidelberg, Leipzig, Frankfurt and Zuffenhausen.

For some, playing at AFL Europe’s Festival of Football will mark their Australian Football debut. 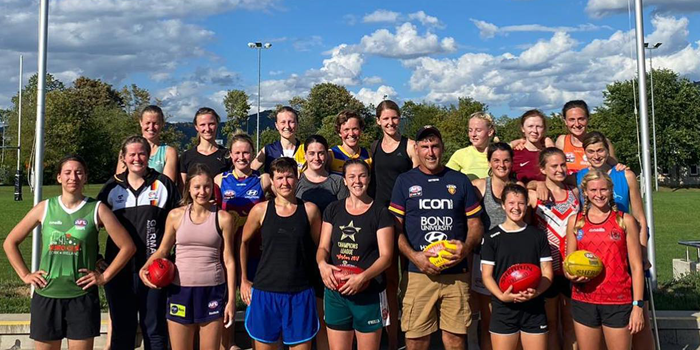 Players from Germany’s national team will be ready to compete at the Festival of Football.

Emily Flanagan from the Leipzig Quokkas and Maren Deden from the Heidelberg Knights both founded their teams this year and will be using the Festival of Football as a chance for most of their players to (finally) play a game of Australian Football.

“Exposure in our city (Leipzig) and getting supporters to see us and the sport will be really important, and also exposure for our players so they know what it’s like to actually play a game,” said Flanagan.

“I think it’s one of the reasons why we chose Leipzig as the location… it’s a new team, and it’s always really helpful to show the new players what the sport is when it’s actually being played,” added Deden.

The tournament will be the first of its kind in Leipzig and played at a local field near the city centre.

As the first AFL team ever in Leipzig, Flanagan hopes the tournament will be a great way to introduce the sport to the city. 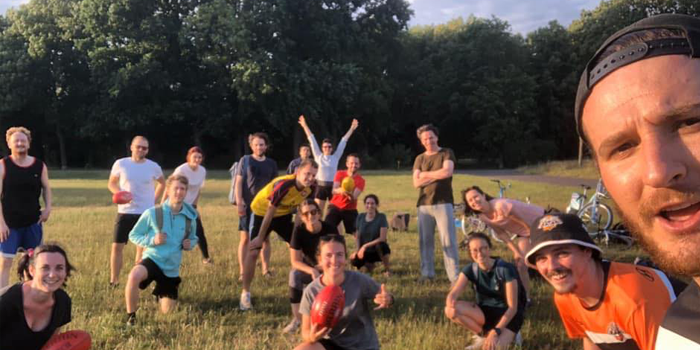 Early days for the Quokkas back in July.

“It’s in a public space, so hopefully people will be wandering past and we can drum up a bit of a spectator sport.

“Maybe even get some recruiting going too!”

With the cancellation of Germany’s women’s 2020 season announced earlier this year, Deden said all players became extremely excited at the opportunity of playing in the Festival of Football.

“The season was definitely something everyone was looking forward to. The travel, the community and just enjoying doing something that everyone around you is really passionate about.

“We’ve since been trying to find a way to get some footy played safely… we were thinking of doing a few short ‘gameday’s’, but then the Festival of Football came up.

As premiers of AFL Germany women’s last year, Hamburg Dockers will no doubt be a tough match-up at the tournament this weekend.

But there are a few teams who have since recruited new players.

“There are some really strong women’s teams in Germany, especially Cologne, Hamburg and Berlin,” said Flanagan.

“It’ll be a fierce competition but also much of a try-out for many of the players.

“The Berlin Crocs hosted a Bushfire Fundraising game in March and they won that… it was them and Hamburg into the finals.

“That was really massive for the Berlin Crocs, so they might step-up again on the day.”

The men’s tournament in Berlin will be hosted by the Berlin Crocodiles and its four teams in the Berlin League.

With the number of men’s teams that could’ve attended, it became a safer option to make it a Berlin tournament with players around the country given the option to participate (should they wish to travel).

How the four teams for the Berlin League are originally decided is based on an annual draft. If more players are to arrive for the Festival of Football, another draft for the new players will then be organised before the tournament.

“This year we had our biggest-ever draft, around 30 people were drafted to new teams for the 2020 Berlin League, said Josh Bollmeyer, captain of the South Berlin Giants.

“Any new players that haven’t played a game or anyone that isn’t in a team that would like to participate in the Festival of Football will get drafted to one of the four teams on the day.

The four teams in the tournament will therefore be the North Berlin Crows, East Berlin Mariners, South Berlin Giants and West Berlin Eagles, all competing at Sportplatz Forckenbeckstraße.

“AFL Europe’s Festival of Football is a great chance to play some footy and will be great for the sport here to raise more awareness,” said Daniel Thomas, president of Berlin Crocodiles.

“Usually we try to get Maifeld as the venue (next to Olympic Stadium), it’s the biggest ground maybe in all of Germany to play footy but it’s always hard to get.

“This year we’ve got two new grounds, so we’ll be playing the tournament on the same ground as we played our Bushfire Fundraiser tournament in March.” 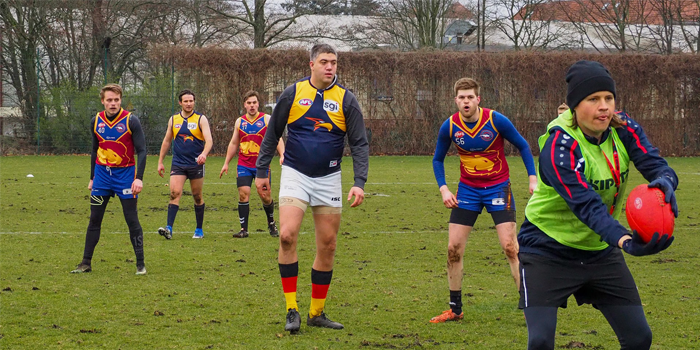 In March, Berlin hosted a ‘Footy against Bushfires’ fundraiser for the towns and families impacted in Australia.

Both Thomas and Bollmeyer are very much looking forward to the upcoming tournament and are excited to see the growth of their new players.

“Somehow we’ve had the more people come down this year more than ever before,” said Bollmeyer.

“Getting some footy into the new players will be good for them. They’ve been training but they don’t necessarily understand what’s actually involved in playing a game.

“The park does work well for the Berlin League… when we play in the city, we actually end up with a lot of bystanders watching which is really cool.”

With the Berlin League forced into a shorter schedule this year, the season has been split into two days. The first just over two weeks ago, the second on October 17th.

On the first day, rounds one & two were played in which both the Giants and Mariners came out undefeated, putting them arguably as favourites coming into the tournament.

Several players impressed in rounds one & two in the Berlin League that Bollmeyer mentioned are a big chance to shine again at AFL Europe’s Festival of Football.

“There’s a new guy that came down, Mark. S, he really turned it on in the Berlin League the other week. There are a few international boys too, especially a guy from America named Chris. H.

“He’s still learning all the skills but he’s just fitter than everyone on the field and he runs around like crazy.”

With plenty of new players on show in both the men’s and women’s tournaments this Saturday, 2021 for Germany is shaping up to potentially eight teams in the women’s competition and ten in the men’s.

Follow @AFLGermany and @AFLGermanyW for more news on Australian Football in Germany including the Festival of Football this weekend.

Europe unites for a spectacular day of footy
Scroll to top