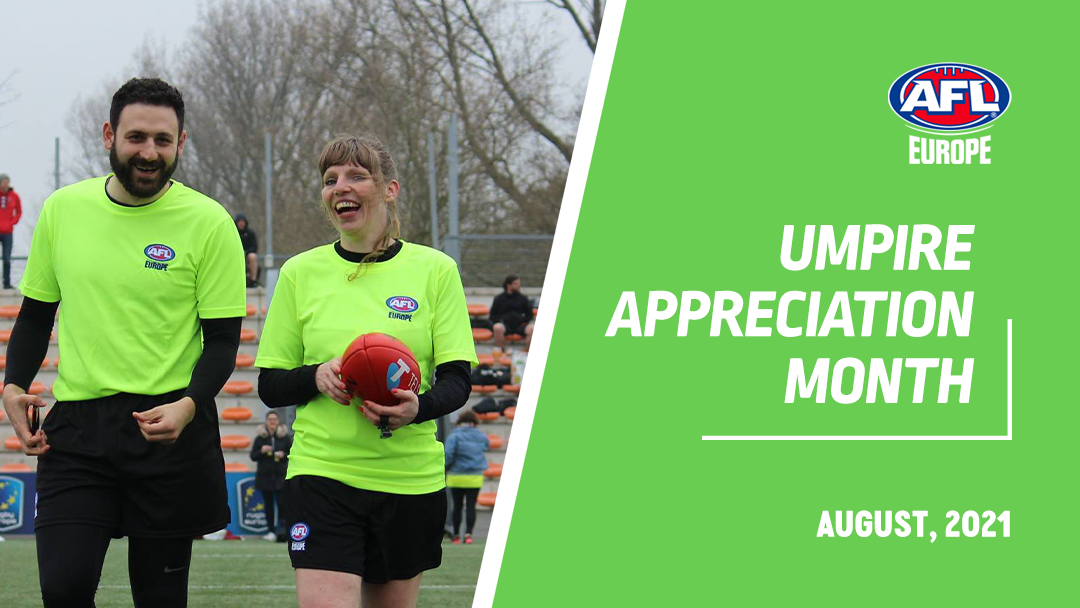 AFL Europe are inviting all clubs in Europe to participate in Umpire Appreciation Month.

Umpire Appreciation Month will run throughout August in attempt to fit in with the many leagues and club fixtures in Europe.

The aim of the month is to encourage people to get involved in umpiring Australian Football at the community level, increase awareness and understanding around umpiring and the enjoyment of officiating matches, whilst acknowledging all past and present umpires in Europe. AFL Europe are encouraging all clubs to join in the celebrations of Umpire Appreciation Month through several initiatives:

It would be fantastic to see clubs and leagues capturing these moments and sharing them to your social media accounts and using the Umpire Appreciation Month artwork that has been sent out to club presidents. “Without umpires, we have no game. However, we are extremely fortunate to have a fantastic group of Australian Football umpires throughout Europe. Last year we had 125 umpires attend our Umpire Development Series and this year we had over 150 umpires in attendance for the same program,” said Managing Director of AFL Europe, Ryan Davey.

“We need to create a positive experience for our umpires, and I am thrilled that for the first time we will be holding an Umpire Appreciation Month in Europe. This will create an opportunity for our players, coaches and club administrations to show how much they appreciate the umpires who officiate their games each and every week.”

You do not need to have any prior knowledge or understanding of Australian Football to get involved with umpiring. Many of our current umpires came from other sports, had previously played the game, or simply saw the game in passing and took an interest.

Join the AFL Europe Umpire Community on Facebook here, and if you have any questions about getting involved email umpire@afleurope.org.