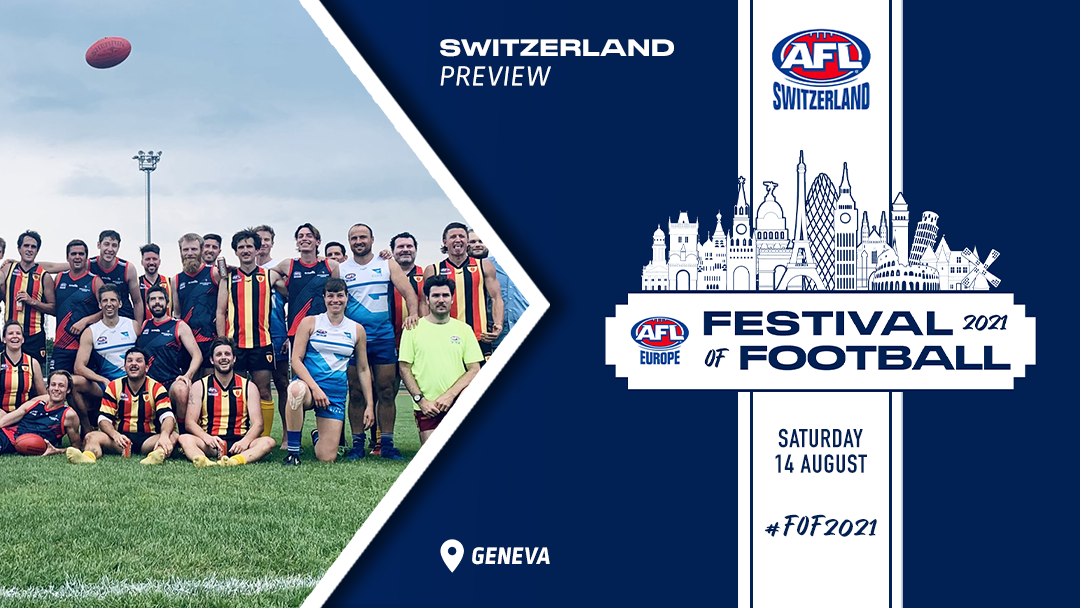 The 2021 AFL Europe Festival of Football will see nearly 15 countries and up to 50 teams competing in local tournaments across Europe and all on the same day of Saturday, August 14th. Switzerland will participate in their debut Festival of Football this year, with four matches scheduled in Geneva.

Geneva Jets, Zurich Giants, Winterthur Lions and the reserves sides at Geneva and Basel Dragons will head to Centre Sportif de Vessy in Geneva to compete in the 2021 Festival of Football.

Unable to participate in last year’s event, this weekend will see the AFL Switzerland teams play in their first AFL Europe Festival of Football.

Geneva and Zurich will get things underway as the first of four matches played throughout the day, beginning at 12:30PM local time. All games on Saturday will be played as 9-a-side and are mixed teams, similar to the AFL Switzerland league.

The 2021 competition commenced just one month ago, in which AFL Switzerland President, Effie Senti, shared her joy for the Swiss footy community to get the season going.

“It’s been awesome… We’ve had lots of fun and there’s been plenty of new people, which we’re very happy about,” said Senti.

“The idea of our reserves competition is to promote the sport to newcomers so that they first play in games that are less physical and a bit easier for them.

“So, to see a lot of new Swiss players join that competition this year has been great… The future of footy in Switzerland is looking bright.” As first time participants in the Festival of Football, Senti spoke on the importance of feeling connected to the AFL Europe community as well as how welcoming all teams and players throughout Europe are.

“I think the Festival of Football is great for the team spirit within Europe,” said Senti.

“It brings us together as a community. In normal times, all teams and countries are able to connect with each other quite easily.

“For me, as a female player, I’ve been invited and welcomed into teams in Germany and Croatia… So all of us now playing footy on the same day will make us all feel connected again.” The two sides are currently training once a month in preparation for next year and in hope of some international matches or tournaments able to be played towards the back end of 2021.

“But if it’s possible to travel, we’d also like to invite over nearby countries such as Croatia, Germany or France for a tournament or to make a small competition.” Aside from international matches, AFL Switzerland look forward to playing the remainder of their 2021 season and the grand final, which will be scheduled in September.

This is the league’s third year of running the mixed competition after beginning in 2019.

Good luck to all Swiss teams on Saturday.

Five-team tournament, national team selection and activities for the family...

New team on the map! Bulgaria’s Burgas Hawks to debut in Festival of ...
Scroll to top