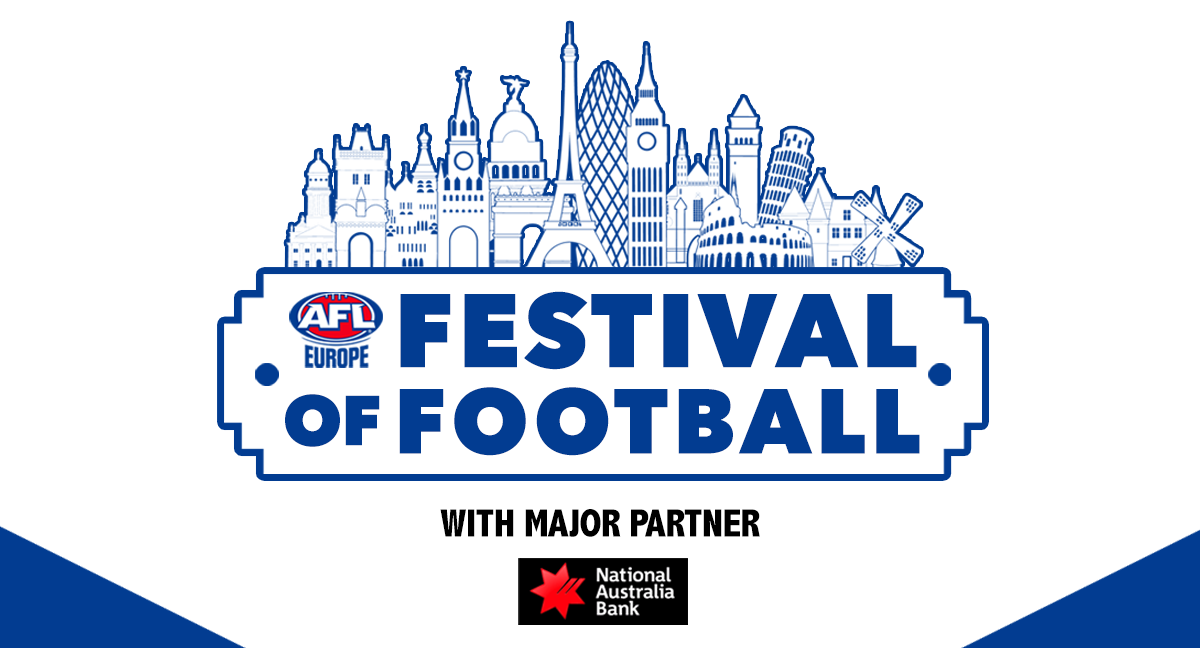 Partnering with National Australia Bank, AFL Europe’s Festival of Football invited the governing bodies of AFL in Europe to host matches with their local team, on the 26th of September 2020, in a city of their choice.

The format and organisation for each differed; some playing single matches, others hosting tournaments with up to four teams.

But for the ten countries and almost 40 teams participating in the Festival of Football, one thing remained the same, all were back playing the game they love.

Read the review of the tournament here or check out each tournament preview below.

The talent combine brings together some of the most exceptional footballing prospects from right around Europe for athletic testing, skill analysis & mental profiling, in the mould of the AFL Draft Camp.

All players’ height, weight, skinfolds, arm length and hand span are recorded at the combine to form their sporting profile that is viewed by prospective clubs, before a three-part fitness assessment involving a speed test, agility run and a running and vertical jump test. This block of testing is followed by a beep-test and skills session, with a personality profiling assessment also completed to provide an insight into the players mindset.

The premier full scale, 18-a-side Australian Football event held in Europe runs across three-days triennially and is a major part of national team preparations ahead of the following years International Cup in Melbourne.

Hosted by AFL Europe in conjunction with the Office of the Agent General for South Australia & Adelaide Crows at Australia House in London, the lunch brings together over 200 guests each year to preview the AFL Grand Final the day before the big one takes place in Melbourne.

Guests are treated to a three-course meal, drinks, a stellar line-up of esteemed football guests and entertainment in one of Australia’s finest venues away from home.

Stay tuned to afleurope.org for details on how you can get your tickets in 2021.

The biggest event for the sport internationally brings together national teams from around the world to compete in a full-scale Australian Football tournament, and is next to be hosted on the Sunshine Coast of Queensland, Australia. European teams have a rich history of success and will be eager to add to that at the next International Cup, with Grand Finals played at The Gabba in Brisbane.

The annual nine-a-side tournament see’s European national sides face off to contest for the title of champions of Europe, with England and Ireland the current champions in the men’s and women’s divisions respectively. Euro Cup 2021 will be played in Amsterdam, Netherlands on the 16th of October.

Commemorating the anniversary of the Second Battle of Villers-Bretonneux that took place during WW1, the men’s and women’s Australian ‘Spirit’ sides go head-to-head with the French national teams to contest the ANZAC Cup. The match honours those Australian’s who fought to reclaim the town from German occupancy on the night of April 24th, 1918, in a victory that was described as the turning point in the war by Sir John Monash.

Villers-Bretonneux had been a key post for the Allies prior to the Germans successfully breaking through defensive lines and taking the town on the 24th as part of their Spring Offensive. This was a considerable victory given the towns vantage point over the city of Amiens which was of significant tactical importance to both sides.

As such, the Australian lead counter-attack was an imperative move to be made and was quickly ordered to commence on the night of the 24th, with the 13th, 14th & 15th brigades waiting for the cover of darkness before launching their response at 10pm local time. Their efforts were successful and the town was handed back to the villagers on April 25th – exactly three years after the landing at Gallipoli – but tragically not before 2,473 Australian lives were lost.

The match is now a focal point in the ‘Australia Week’ celebrations organised by local authorities that recognise this sacrifice made by the Australians who retook Villers-Bretonneux.

Played since 2009, the 32 Australian men and women selected to represent their country in the ANZAC Cup are done so based on their own personal or family connection to the armed forces rather than their specific footballing experience or ability, placing extra importance on the already momentous honour of pulling on the green and gold.

Players are hosted by adoring local families and spend time in the lead up to the game engaging with their opposition by running community footy clinics, sharing a dinner and guernsey presentation, taking part in a street parade and holding a combined training session, before attending the dawn service at the Australian National Memorial where the names of 10,733 Australian’s who lost their lives on the Western Front are listed.

The premiers of each Australian Football league from right around Europe travel to the Dutch capital to vie for the crown of Europe’s leading club, on a day that sees close to 400 players play across the 50+ matches on the day.

Held annually, the 9-a-side event is one of Australian Footballs premier international spectacles for men’s and women’s club sides.

The annual 9-a-side tournament is AFL Europe’s premier event for University teams, which see’s sides from throughout Europe travel to compete on one jam packed day of football.

AFL Europe is excited to announce that applications are now open for the Australian Spirit and Umpiring team to participate in the 10th Annual ANZAC Cup in Villers-Bretonneux, France.

The 2018 ANZAC Cup will be extra special with it not only being the 10th ANZAC Cup but also the 100th Anniversary of the Battle of Villers-Bretonneux. As such, the matches next year will take place on Wednesday 25th April following the Dawn Service.

The small town of Villers-Bretonneux in Northern France has a strong connection with Australian Armed Forces. On 24th April 1918, the town was captured by German forces. Overnight the Australian troops retaliated and by dawn on the 25th April 1918 the town had be retaken.

The ANZAC Cup is played between the Australian Spirit team and French national sides for both men and women and is part of the ‘Australia Week’ celebrations held in Villers-Bretonneux in the lead up to ANZAC Day.

Players and Umpires will be expected to arrive in VB by Midday on Tuesday 24th of April. Participants are expected to attend the Dawn Service on ANZAC Day and ideally stay with their billet family until Thursday 26th April.

The ANZAC Cup costs £100 per player/umpire and includes; full playing kit, team uniform, billeted accommodation, dinner on the Tuesday evening and lunch on the Wednesday.

Applications are welcome from any Australian or New Zealander with selection for the event emphasised on a player’s personal connection to WW1 and the Armed Forces and not just purely football/umpire ability.

Players/Umpires interested in applying for the 10th Annual ANZAC Cup should express interest to ben.durance@afleurope.org to receive an information sheet and application form. Application forms need to be returned by Friday 1st December to be considered.