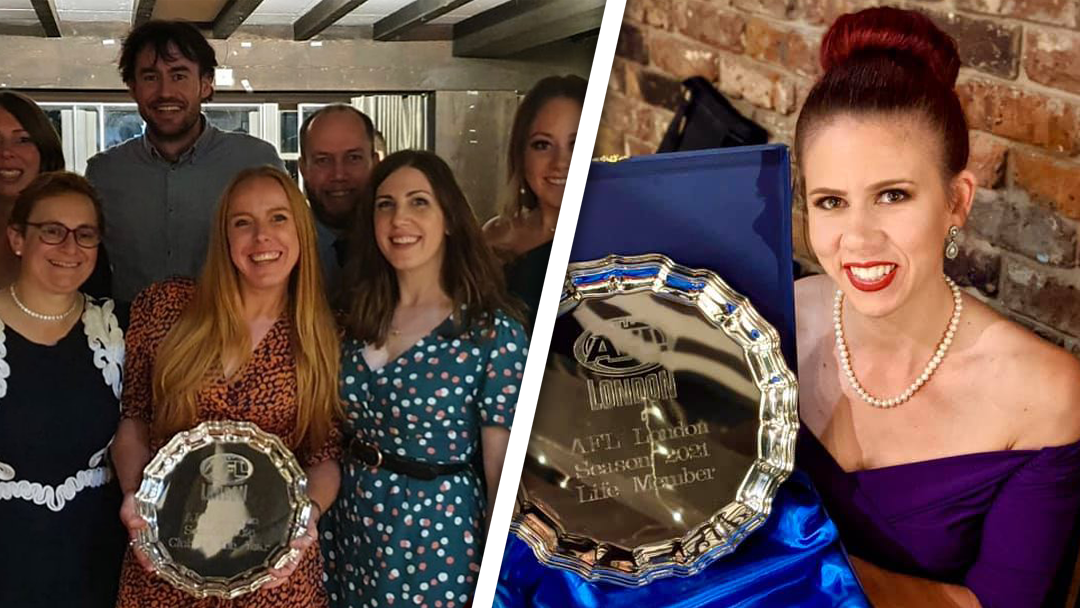 Italian Tony Liberatore went on to win the Brownlow Medal, and the Collingwood Magpies, with the likes of Daicos and Starcevich, claimed their first premiership in 32 years. However, its 30th anniversary season, like many sports and leagues across the world, would soon become suspended.

The wait for AFL London Co-Presidents Marianna Graham and Sarah Howell, and all teams, to get the celebratory season underway proved a little more onerous than it ever had before.

“It was difficult initially… We didn’t really know what restrictions we were going to have or if there was going to be another lockdown,” said Graham.

“Testament to Sarah’s perseverance, the sport is recognised through Sport England, which was a huge tick for us and helped get our 2021 season underway.

“It was a really short season, but I think all clubs were just really happy to be playing footy after almost two years.” Despite its shortened format, the season quickly became a remarkable one. For the first time in the league’s existence, each division’s grand final was won by a different club.

And finally, club members, umpires, current players, former players and officials were able to celebrate the year and the league’s existence at the AFL London 30th Anniversary Dinner and Awards Night earlier this month.

Held in Marble Quay, Howell and Graham kicked off the event by welcoming and thanking all attendees for their contribution to the 2021 season, before proceeding into an interview with Collingwood Magpies star, Chloe Molloy.

Molloy spoke to Graham about her journey into the AFL Women’s (AFLW) competition, from wearing her footy boots to bed as a kid to making her debut in 2018 and winning the league’s best first year player award.

The AFLW was first played in 2017, two years after the AFL London women’s competition had launched.

The AFL London women’s competition begun with four teams in one division, and quickly grew to nine teams across two, spiralling the growth of women’s footy across the continent. Howell and Graham then progressed through the awards for the 2021 season, announcing each men’s and women’s division’s leading goal kicker, best and fairest winners and each coach of the year.

Umpire of the year was announced, as was best club of the year which was awarded to the youngest team in the league, South East London Giants. The most prestigious award of the night was reserved until the very end. Howell and Graham announced the third-ever recipient, along with Sam Percy (2016) and Chris Rea (2017), of AFL London Life Membership.

Stopinski has umpired in Europe for nearly five years across numerous tournaments, events and matches in over ten different countries.

Heading all AFL Europe Umpires, Stopinski’s contribution and devotion to the sport in Europe has been tremendous, and she will be dearly missed by the entire community as she returns home to Australia.

Congratulations to Stopinski and all award winners on the night, and to AFL London for a fantastic event. The season was played just a year prior to the launch of Danish Australian Football League (DAFL). The two leagues would soon meet in 1994 for the first international match between two European sides; Great Britain and Denmark.

Australian Football in Europe has since grown to be played in more than 20 countries, with even more men’s and women’s leagues established across the continent.

Teams compete locally as well as travel for international friendlies and tournaments including the AFL Europe Euro Cup and Champions League.

AFL Europe are hiring for an Event Coordinator
Scroll to top