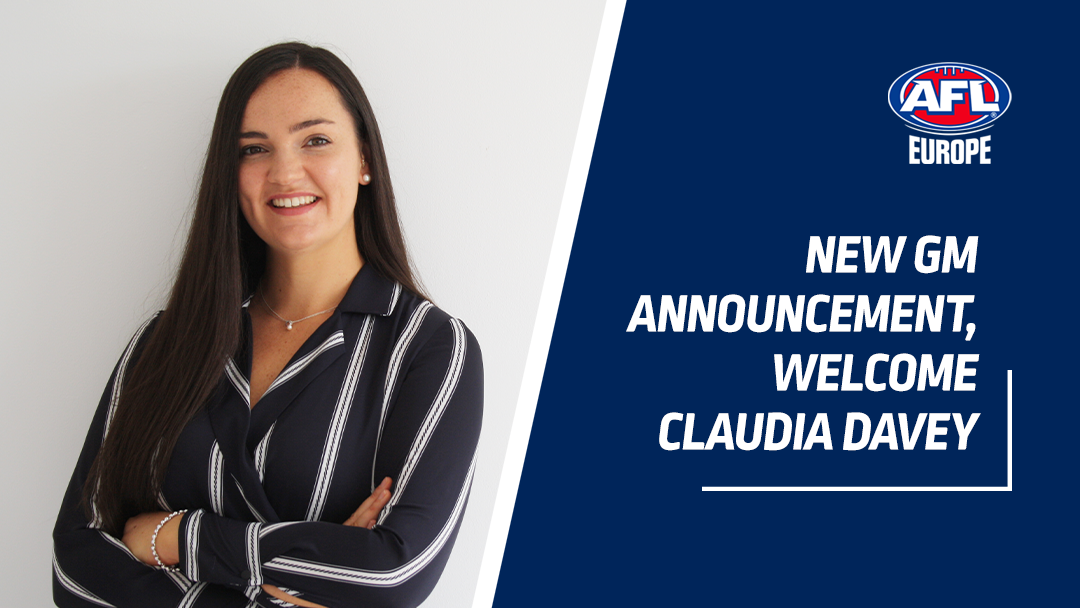 The AFL Europe Commission are pleased to announce the appointment of Claudia Davey to the role of AFL Europe General Manager.

Davey joins the AFL Europe team in London from Williamstown Football Club, where she held the role of VFL Women’s Football Manager.

Prior to her position with Williamstown FC, Davey has extensive experience working within elite sporting organisations including roles as Female Talent Coordinator at Western Jets, working in Strength & Conditioning at Cricket Victoria and Western Jets, in Commercial with Collingwood Football Club and Melbourne Vixens Netball Club, as well as Sports Administration at Trinity Grammar School.

Davey spoke of her delight to be appointed as the new General Manager at AFL Europe and is very passionate about strengthening all aspects of Australian Football across Europe.

“I’m looking forward to continuing the growth in participation and awareness of Australian Football across Europe, but also building the talent pathway for athletes to play at the elite level,” said Davey.

“I love working in Australian Football (and sport) because of the support network, culture and values that it brings to people’s lives. I’m very excited to get involved with the AFL Europe community and meet the passionate people in all countries and clubs who contribute so much to the sport.

“My experience lies predominantly in building pathways for players as young as 14 to progress to the elite level. Initially I worked in High Performance and have transitioned into management roles in the U/18 talent pathway and VFLW with Williamstown Football Club over the last six years.

“The most crucial part of these roles is building an environment and a community that people want to be a part of and that supports athletes and staff in all aspects of their life, not just playing. I look forward to bringing this experience in building AFL communities to AFL Europe.”

Completing a Bachelor of Sports Science and Masters of Business Administration at Victoria University has equipped Davey with the confidence to excel in her past roles, and even launching a successful business in Career Mentoring.

Appointed to Board Director of Gridiron Victoria earlier this year, Davey is very familiar with growing the awareness and participation of sport in emerging markets.

“Joining the Gridiron Victoria Board has given me an excellent insight to growing a predominantly American sport in Australia – where people know very little about the sport and may have never even watched a game – which is very similar to growing Australian Football in Europe. This experience has prepared me for some of the challenges the AFL community may face in Europe and how to best identify those (challenges) to strengthen clubs.”

Chair of the AFL Europe Commission, Oliver Howard, said the appointment of Davey was a coup for European footy.

“We are thrilled to welcome Claudia to the team at AFL Europe,” said Howard.

“Claudia brings incredible passion for the development and growth of the game and the drive to lead our community as we re-start playing footy across the continent.

“Coupled with her deep experience identifying and nurturing elite talent, we couldn’t be more impressed and excited for Claudia to begin.”

With the appointment of Claudia Davey comes the departure of current Managing Director, Ryan Davey, who ends his time with AFL Europe at the end of August after almost five years.

Howard said, “Ryan will leave a lasting legacy at AFL Europe. He has overseen significant growth in all areas of the game – participation, elite talent pathways, coaching and umpiring – and has led with distinction.

“Recently, Ryan has galvanised the AFL Europe community during the most difficult period with footy unable to be played. Ryan will hand over the role with the highest respect and admiration from all who have had the pleasure to work with him over the past five years.”

Ryan will remain closely involved with AFL Europe as a member of the AFL Europe Commission, ensuring a smooth transition to Claudia.

Claudia will officially commence as General Manager at AFL Europe on August 2nd, 2021.