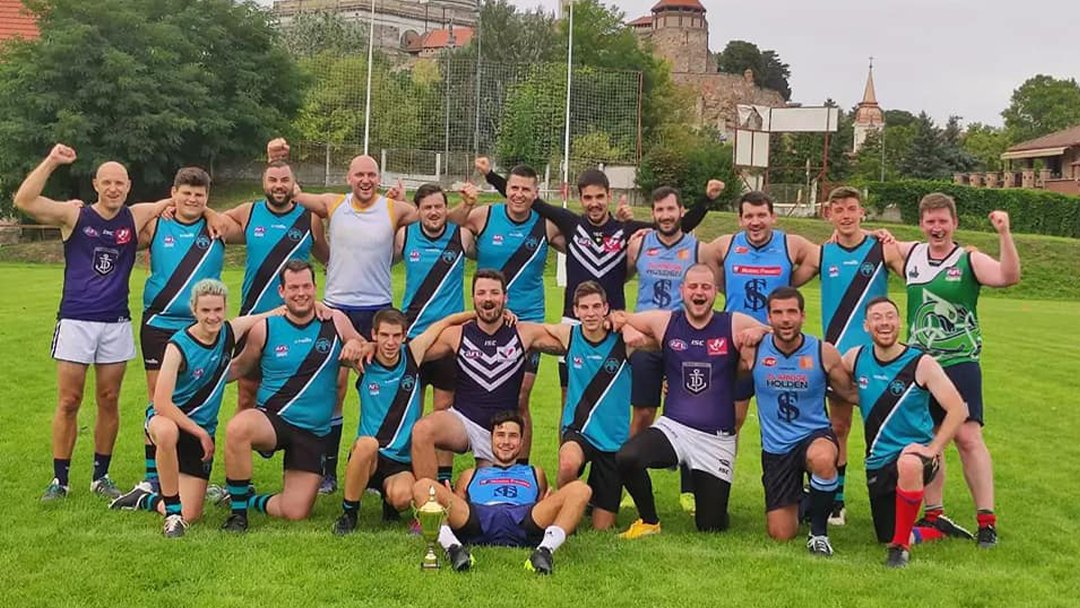 The Budapest Bats in AFL Hungary were joined by Croatia’s Sesvete Double Blues to compete in the first match of Australian Football played in Hungary. Read how the two sides went thanks to Reporter for AFL Hungary, Zoltan Marosy.

Two weeks on from their debut at the AFL Europe Festival of Football, the Budapest Bats and AFL Hungary have made history yet again.

On the 28th of August, AFL Hungary and the Bats hosted their first-ever game of Australian Football. Held in the beautiful city of Esztergom, the match between the Hungarian and Croatian sides was watched on by curious locals, who had never seen a sport quite like this before.

The picturesque venue was situated under the imposing Esztergom Cathedral and next to the River Danube, which is also the Slovakian border.

The Bats showed as much grit and determination as you could ask for from a team playing only its second game. Midfield bulls, Károly and Gergő Petrányi, often took the opposition by surprise with their fierce tackling and courageous marking, while experienced on-baller, Tom Wayman, collected plenty of possessions and kicked the only goal on the day for the Bats.

A tough day for the Hungarian defence, led by skipper Zoltan Marosy, with star backman, Mark Ryan, out missing through injury. It was a weekend to remember for the Sesvete Double Blues, as they took home the perpetual trophy for the first time.

Star ruckman, Josip Karadža, dominated most of the stoppages, while half-forward, Tomislav Cvetko, left the Hungarian defenders helpless with his low and hard passes. Forward duo, Robert Jeličić and Ronan Moran (playing as a guest from Ireland) both had days out, kicking 15 goals between them.

Overall, it was a successful day for the sport in Hungary and we look forward to many more matches to come for the Bats.