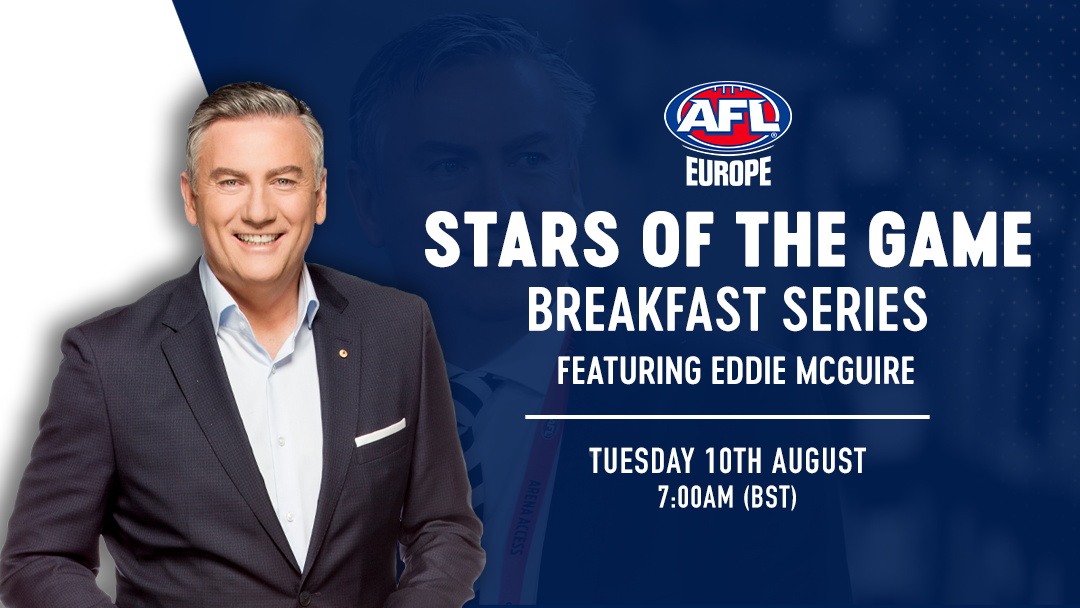 How would you like the opportunity to hear from some of the most prominent figures in Australian Football?

AFL Europe are excited to announce a brand-new online breakfast series ‘Stars of the Game’ that will host some of the most popular and successful people involved in the AFL and AFLW.

Register to the event here.

Each guest will share their experiences and insights into the sport, as well as answer questions submitted by you.

Joining us as our first guest of the series, thanks to AFL Poland and JAM TV, is one of Australia’s most acclaimed media personalities, Eddie McGuire.

In roles ranging from CEO of the Nine Network to hosting ratings blockbusters including The Footy Show and Who Wants to Be a Millionaire, McGuire is undisputedly regarded as one of the major influences on the Australian media landscape and holds over 40 years’ award-winning experience.

McGuire was also President of the Collingwood Football Club for 23 years, where he led the Magpies to be one of the most successful sporting clubs on and off the field in the country.

The first event of the series is free to join, begins at 7:00AM BST on Tuesday, 10th August and will run for 45-minutes. Upon registration, you will have the opportunity to submit your own question to ask Eddie.

Registration is open to anyone and will close Sunday, 8th August. A confirmation email with the online meeting login details will be sent out on Monday, 9th August.

Special thanks to AFL Poland and JAM TV for making the first instalment of the Stars of the Game Breakfast Series possible.

JAM TV are the producers of AFL docu-series ‘Making Their Mark‘ that launched globally on Amazon Prime in March earlier this year and follows iconic AFL identities from six teams throughout the 2020 AFL season.

Register to the event here.

Croatian teams to head to the coast for Festival of Football

Austria’s DownUnderDogs and Galahs to welcome Budapest Bats for debut...
Scroll to top