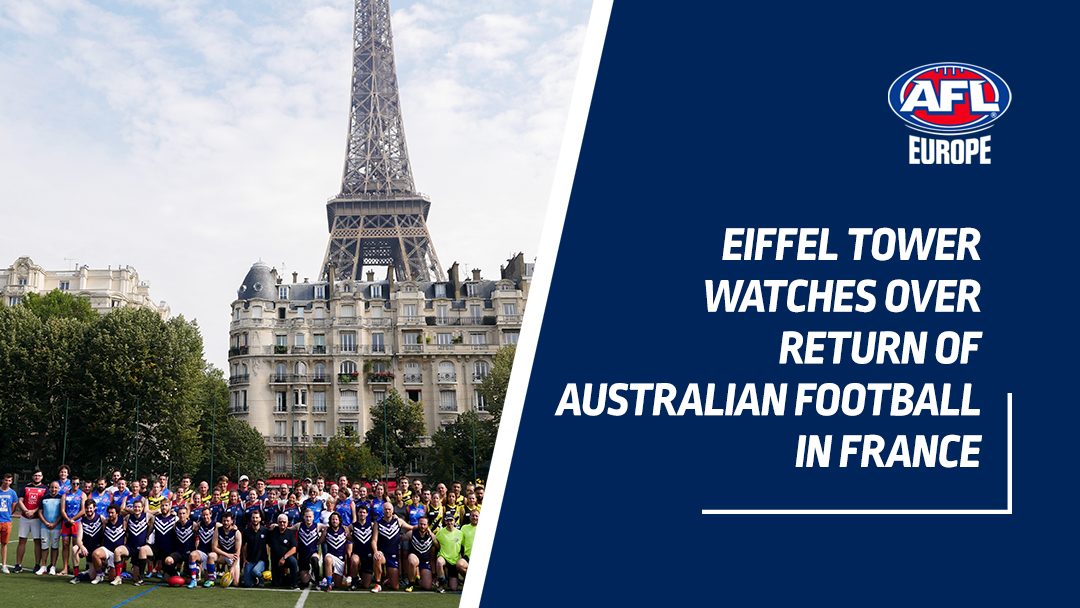 Playing in front of the Eiffel Tower in Paris. The remarkable return of Australian Football in France.

On Saturday, September 4th AFL France hosted a special day of Australian Football as part of the Australia Now Festival in France.

The event, starting at 10:00 AM local time, was held in front of the Eiffel Tower at Stade Èmile Anthoine and consisted of footy activities and matches, showcasing the sport to the public and connecting Australian and French sporting enthusiasts. The day started with activities for newcomers to come and try the sport, including an open session for kids.

Then, at midday, Australian Ambassador to France, Gillian Bird, took on the role of the first “bounce” to launch the opening match of the day. Captain of the men’s Paris Cockerels, Pierre Boscart, spoke on his and everyone’s enjoyment from the event.

“Australia Now was truly an event to remember. The location was amazing, at the foot of the Eiffel Tower,” said Boscart.

“I was also glad to see many children trying the sport. Most of all, we were extremely happy to meet up with the different French clubs after the lockdowns.

“Having all teams mixed created exchanges and a positive spirit. I believe It was a great way to get footy back on track in France, as all participants came back extremely motivated from the event.” Over 150 people were estimated to be in attendance for the day, with plenty of onlookers witnessing their first-ever match of Australian Football.

“Footy is back in the country after two years impacted by the COVID situation… What a day it was for the sport in France,” said Thomas Depondt of AFL France.

“This was an incredible occasion to show how Australian Football is growing in France. This sunny day in Paris, with three friendly matches including one women’s game, launched the new season starting in October.

“The community is looking forward to playing again soon.” With the season fast-approaching, anyone who is interested in joining a team in France is welcomed to do so by messaging their interest to AFL France on Facebook or Instagram.

Following the event, the sport continues to gain more interest with five new female recruits eager to join the Paris women’s side.

We’re excited to see the 2021/22 season get underway next month as well as what’s in store for the future of the sport in France.

Congratulations to the team at AFL France on organising such a successful and momentous event.