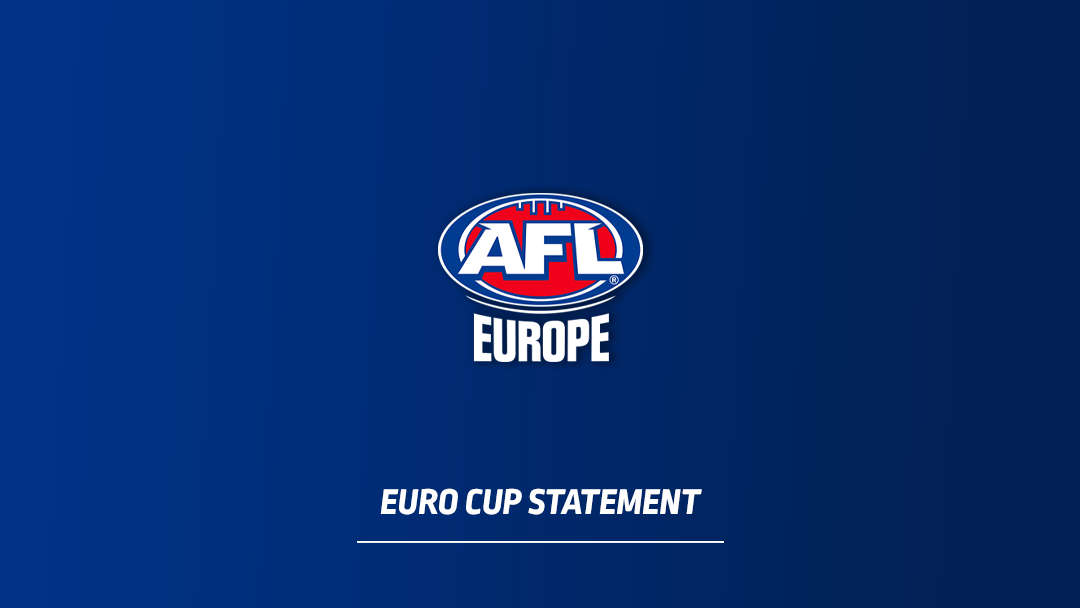 The AFL Europe Commission, in consultation with AFL Europe Members, 2021 Euro Cup hosts AFL Netherlands and Sportpark de Eendracht, has made the decision to officially cancel the 2021 Euro Cup.

Following an earlier postponement of the tournament (from June 26 to October 16) in an effort to proceed, the decision to cancel has been another incredibly difficult yet necessary decision to make.

AFL Europe Members have made clear on numerous occasions that they wanted a definitive decision on this tournament at least three months prior to the event to allow participants and all involved time to prepare and book their travel. This time has come.

Whilst cancellation is no doubt a disappointing result, AFL Europe’s priority at all events and tournaments is and always will be to create a safe and positive environment for all; players, coaches, umpires, volunteers, AFL Europe staff, medical support, spectators, the public, and anyone else involved.

Ultimately, the AFL Europe Commission is not satisfied that a safe travel or playing environment is achievable in the current climate and we believe it would be irresponsible to go ahead with a multi-country tournament in October.

We would like to thank everyone who has remained patient with this decision, and particularly thank AFL Netherlands and Sportpark de Eendracht for their flexibility throughout the past few months.

AFL Europe appreciates the importance of Euro Cup. Tournaments like the Euro Cup play a huge role in growing the game in Europe and are particularly important after a long period of limited footy. This made the decision to cancel the 2021 event even harder.

AFL Europe remains committed to helping all participating countries and leagues of Australian Football in Europe, and will support regional tournaments, that comply with local coronavirus restrictions and guidelines, that are held in place of the Euro Cup in October.

If you are interested in hosting a regional tournament, please email admin@afleurope.org with the details of your proposed event.

Over the past few weeks, it has been fantastic to see almost all participating countries return, or with a scheduled date of return, to domestic and intraclub matches. It is ever so important that all players, umpires, coaches, volunteers, and spectators continue to adhere to their appropriate national and AFL Governing Body guidelines for a safe return to play.

We hope AFL Europe Members will continue to focus on developing these local clubs and domestic competitions, including participating in the AFL Europe Festival of Football in August.

We would also like to take this time to share that we are planning and are hopeful of getting back to our regular events calendar in 2022, which would see the return of international tournaments.

This would include the return of the Fitzpatrick Cup in February, Champions League in April or May, ANZAC Cup in April, Euro Cup in June and the AFL’s International Cup* in August. If the International Cup does not run in 2022, then AFL Europe will host a European Championships in its place.

More details on next year’s events will be shared in the coming months.

*The AFL are expected to make an announcement regarding the next International Cup within the next few months.