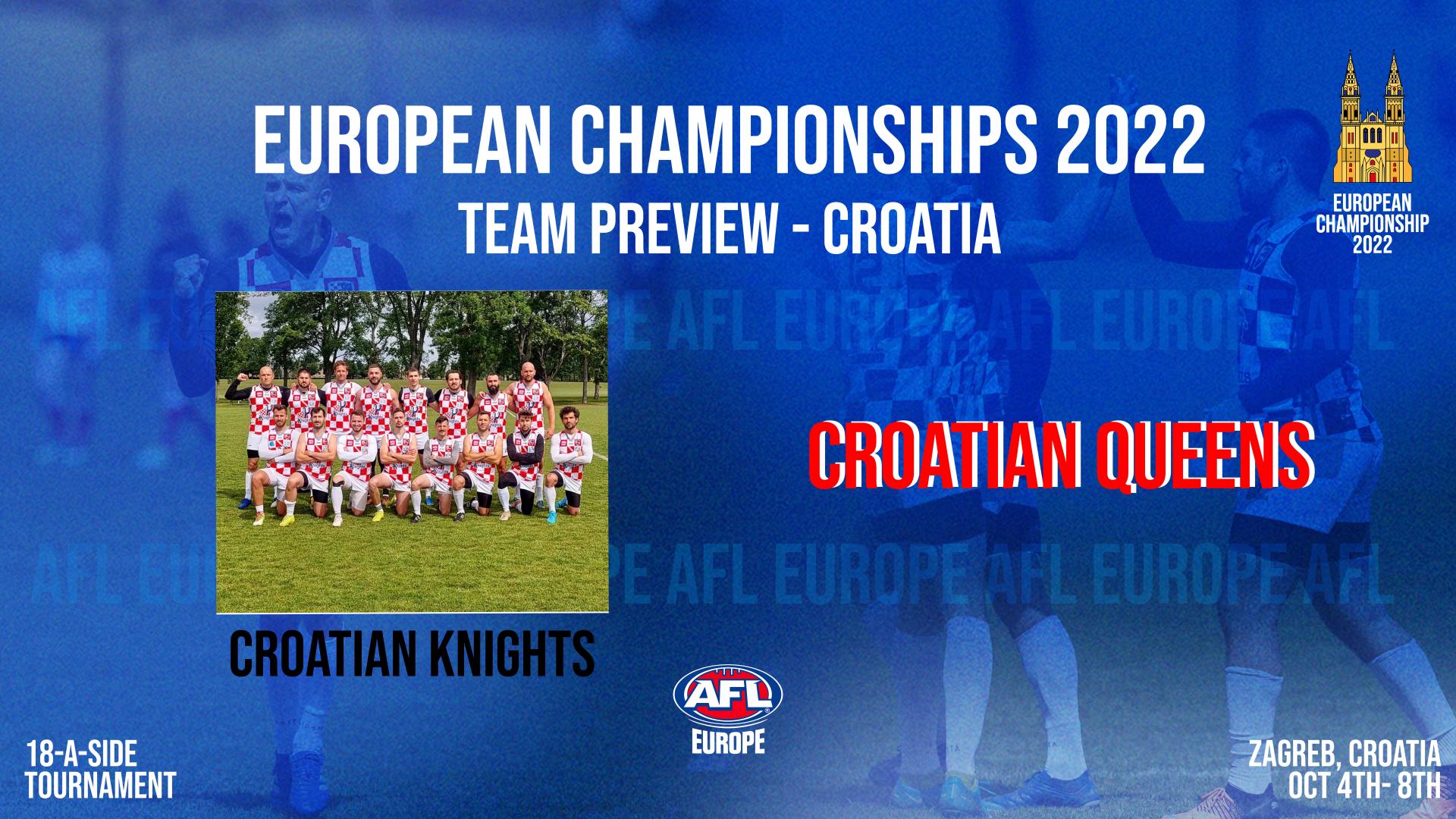 Tournament hosts, Croatia, have high expectations for EC22. Bringing both a men’s and women’s side for the first time. Between the Knights and the Queens, there will be plenty of Croatian footy for the home fans to support.

This is the first European Championship that the Croatian Queens will be attending, a landmark achievement for the host nation who also sported both men’s and women’s sides at Euro Cup earlier this year.

Team Manager, Dinko Irsag, said the Queens are all excited for the experience and are looking forward to having the “home turf advantage”.

This EC will be the first time a Croatian women’s side has played 18-a-side in a tournament setting, so considering the experience of some of their competition, expectations are quite tempered. The squad is relishing the opportunity to test themselves against Europe’s best and become part of history as Croatia’s first women’s team at an EC.

Despite the lack of experience, Irsag is sure the squad will put its best foot forward and has been impressed with the player’s high level of preparation, particularly in terms of making the switch to 18s.

Irsag said, “A lot of players are still trying to get the handle of the game and are doing their best to transfer from nine-a-side to 18-a-side.”

“Trying to switch from nine-a-side to 18-a-side is hard on two levels. One, the physicality of 18s is quite different and taxes the body a lot more and two, the concept of having another 17 players on the field with you is a concept that needs a little bit of time to get used to.

“Most players were not in Zagreb over the summer, many spent their time getting in shape for the tournament elsewhere. Now that they’ve all come together the training sessions are shaping up and looking good.”

Despite the challenges of changing codes, Irsag said the Queens are eager to “finally find out what it means to play footy in its original form”.

Somewhat constrained by the broad range of debutants and inexperienced footballers, Irsag said the depth of the Queen’s tactics may not match their opposition. However, “every single player in the Queens is looking to leave a mark on the field and is dedicated to making sure the team does the best it possibly can”.

“We’re all very happy to be hosting this year’s European Championship and just being part of such an event is an honour for all of us.”

“There’s always something new to find in Zagreb and even our players native to the city be looking to find hidden nooks and crannies that make it special.”

Ahead of their fourth European Championships and first on home soil, the Knights are looking to improve upon their fourth placed finish from 2019 and win some silverware in front of the home fans. Expect this highly motivated squad to be an extremely tough match-up, particularly off the back of a strong effort at Euro Cup earlier this year in Scotland.

Team captain, Josip Kravar, said the squad is very excited to welcome everyone to Zagreb and expects the standard of competition to very high.

“This year, as we are hosts, we are very happy that we now have access to a proper footy oval after more than 10 years of struggle to obtain it. We hope that everyone will enjoy it and we will have good games and fun for all,” he said.

Josip said although the squad expects to bring its best footy, they are being cautiously optimistic due to their lack of 18-a-side experience. He admitted to not feeling as confident as they are playing nine-a-side, particularly with respect to teams like Great Britain and Ireland.

However, months of preparation has gone into building the strongest and most cohesive team possible, with an uptake in training set to begin in September, the Knights are quickly building themselves into Croatia’s best Euro Champs outfit yet.

“We started our preparations in Feb 2022 and the national team has once-per-week training. We will increase this in September to two times per week.” Josip said.

“Most players have training in their clubs and the Croatian league has its finals in September, so we expect to be in competition form in October.

In terms of team building, it is a different story here. We are a small country, and most of the clubs are in Zagreb or near Zagreb, so we can afford to have weekly training. Players know each other very well and there are no requirements for national team players to travel.”

As the Knights already know each other quite well, team building is less of a priority in training. Josip said the squad has largely focused on preparing themselves for playing Aussie Rules in its purest form for the first time since EC 2019.

He said, “We gained experience in the last ECs and in IC 2017 and we are trying to play friendly games to stay in touch with the original game.”

“As stated, we have weekly training and we are doing our drills for 18-a-side footy. The core of the team is the players that have experience from the last IC CUP with the addition of a few new young players and we hope that will be a good combination not just for the tournament, but for the future of our footy community.”

Boasting a healthy mix of experience and youth, the Knights are keeping their new young guns close to the chest, not singling anyone out ahead of the tournament as someone to keep an eye on.

“It would be unfair to single out any one player, as most of our strength comes from our unity, sacrifice for the team and sense of national pride in playing for our national team. There are a couple of debutants playing 18-a-side for the first time, but I will leave them to stand out during the games,” Josip said.

Excited to play and compete, the Croatian captain acknowledged that welcoming the broader European footy community to his country and making everyone feel welcome is the number one priority. He said he hopes everyone gets a chance to explore the city and if they need some tour guides, the Knights are willing to lend a hand.