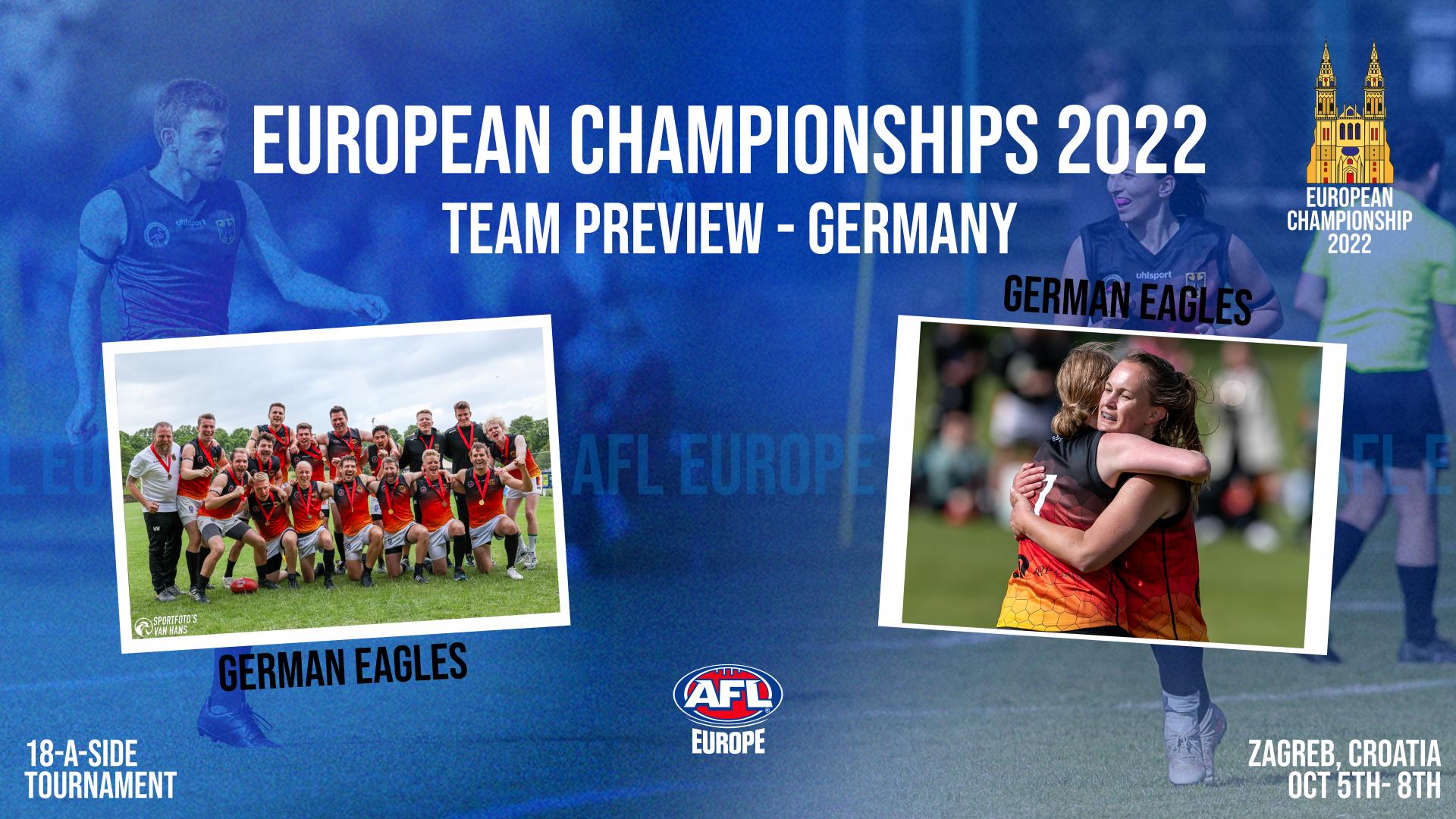 In this edition of team previews, we take a look at Germany and hear from the Team Manager to see how both the men’s and women’s Eagles squads are preparing for the tournament.

Returning to the women’s edition of European Championships for the second consecutive tournament, the German Eagles have silverware in their sights.

After finishing second at their debut tournament in London in 2019, the Eagles expect to go one better this year and serve it up to the reigning champs.

Team manager, Manuell Gauding, said, “We still have some players who were there in London and with the novice players under their guidance in an 18-a-side match, we expect to remain competitive.”

“The team is shaping up nicely after the European Cup – the tournament was instrumental for our players to get to know each other.

“We have had some footy school sessions and online team building games since and there will be one final camp in Berlin to focus specifically on Euro champ training ahead of the competition in October.”

Ahead of the tournament getting underway, the Eagles are most excited to playing the 18-a-side format of the game, something which will be entirely new to some players.

Four-straight days of playing matches is another point of excitement for the squad, who relish the fitness challenge and are looking forward to pushing themselves to the limits throughout the week-long competition.

Gauding said the team has a myriad of players to keep an eye on, a mix of veterans and debutants, who he expects will make life tough for the opposition and put Germany in the best position to win.

He said, “Experienced eagles Maren McLachlan, Ioanna Kopasaki and our captain Resi Kresse are playing at the top of their game as seen in the AFL Germany competition. Marie Kaiser has also been working hard to become a valuable midfielder with the versatility to play in other positions across the field.”

“Newcomer Lisa Umlauf will command the backline with confidence. The new midfield players Maike Beule, Bente Nachtigal, Judith Schmitz, Klara Haertl and Pia Plagens should not be underestimated either, and we expect to see the agility and determination which they have shown us in camps and at the European Cup.”

With the focus strictly on going deep into finals and supporting their male counterparts, Gauding said there won’t be an abundance of time to explore Zagreb but will endeavour to see the city’s sites nonetheless.

“We are excited to plan team dinners in town and will see as much as possible.”

The men’s German squad is returning to European Championships for just the third time but expect the Eagles to be extremely competitive after finishing runner-up at Euro Cup in Edinburgh earlier this year.

German football has really gone from strength to strength in the wake of Covid, so expect the side to go better than its finish of sixth from back in 2019 where the squad ultimately lacked enough 18-a-side experience.

Guading said, “The men’s team this year is the strongest we will have ever brough to an 18-a-side tournament. We have struggled at previous tournaments to adjust to the larger format, but we aim to be competitive this year, against very strong competition.”

“The bigger team means education on the roles of flankers, wingman and pockets is crucial and we are training these positions via video chats, as well as during training camps.

“We will have had three training camps in 2022 by the time EC rolls around which is great for the team to build both skills and spirit together. They love football, so that helps bring them together quite quickly.”

The Eagles were a bit of a surprise package at Euro Cup, going further than many predicted. Their amazing run was epitomised by the Eagle’s upset of the highly favoured Irish Warriors in a preliminary final, so expect to see them take another leap in Zagreb.

In the wake of Euro Cup, the Germans have put the rest of the competition on notice and their opposition will be sure not to underestimate them again. Although their 18-a-side experience is limited, this squad possesses an immense level of team spirit and togetherness that other teams may envy.

The most important thing for this side is ensuring each and every player is enjoying what they do and feels a part of the team.

Gauding said, “We are looking forward to competing quarter to quarter, to see our improvement from previous tournaments and hopefully with that comes the rewards for the effort, but overall, our mantra is speed, support and Spaß (German for fun), so we will ultimately aim to enjoy our footy.”

Guading also highlighted some specific talent he is excited to see take EC by storm.

“As mentioned we have some experience, like with our Captain, Florian Naumann and Vice Captains, Tobias Menzel and Martin Schüttoff. They will lead from the front and be players to watch,” he said.

“Some young guys who haven’t played much 18s before but are showing plenty of talent are Moritz Remuta and Max Krämer, who I’m excited to see play again in this format.

“We will have a host of tournament debutants, but each of them will be bringing high quality football from AFL Germany to Zagreb.”

A final note, this tournament will be the first time the German Eagles have a representative from every AFL Germany club within their squad, which represents just how far footy in Germany has come.