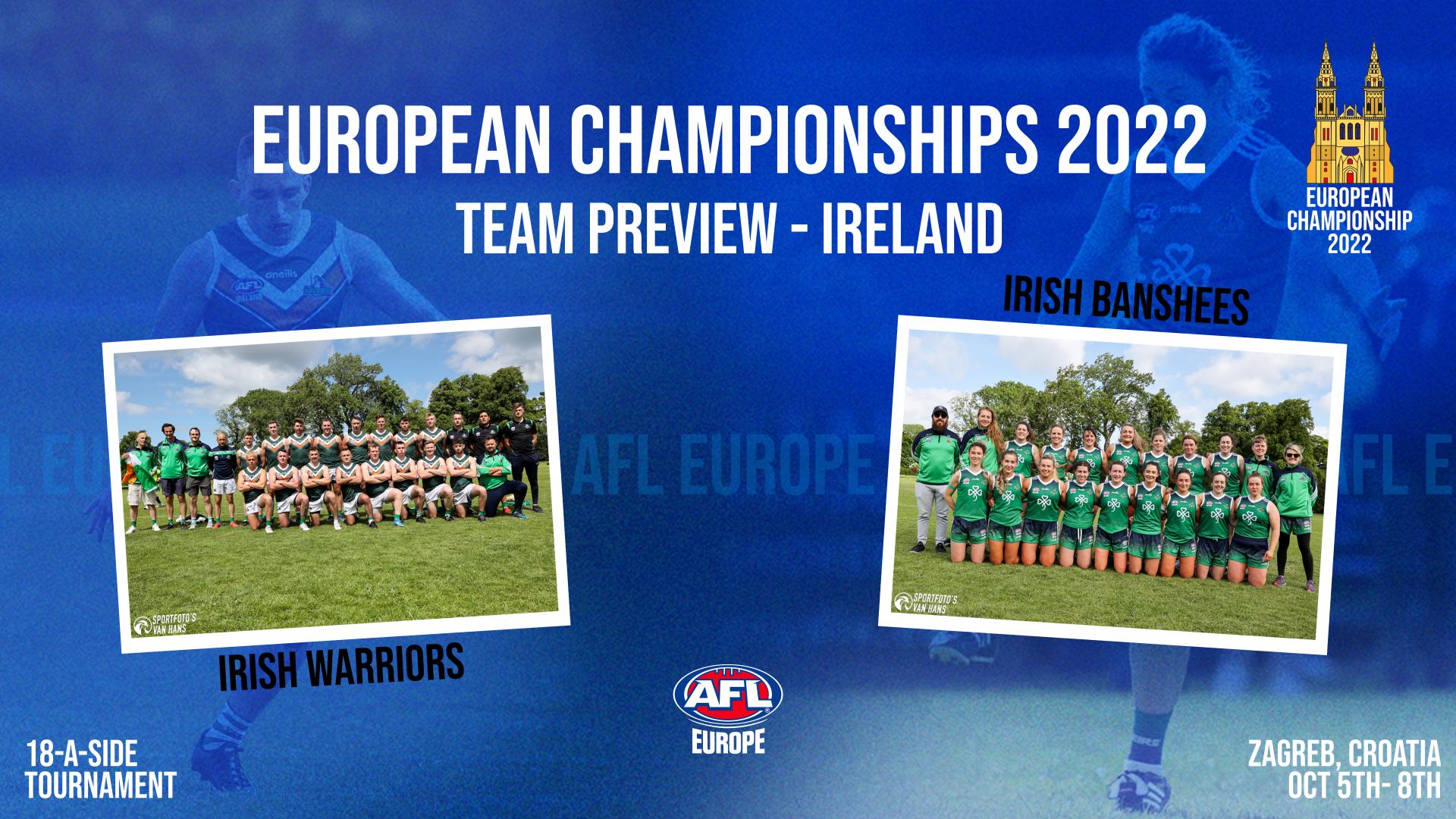 The 2022 European Championships will soon be upon us and in order to build up the hype, we will be previewing all ten teams from the five countries participating in this year’s tournament. The European Championship is AFL Europe’s only 18-a-side tournament – the truest form of Aussie Rules – and takes place once every three years. All set to be hosted in Croatia’s capital city, Zagreb, the tournament will take place at the University of Zagreb’s recently built full size AFL ground – one of very few in Europe. Read on below to see how things are shaping up ahead of the first bounce on October 5th.

In this edition of our team previews, we take a look at Ireland and hear from the men’s and women’s coaches to see how each respective squad’s preparation for the tournament is going.

Returning for their third European Championships, the Irish Banshees will hope to go back-to-back and retain the title they won in 2019. Fresh off a dominant performance at Euro Cup earlier this year, winning in emphatic style, the Banshees will be the team to beat. Eager to continue their winning run, expectations are high amongst one of Europe’s most  competitive Aussie Rules squads.

Head coach Shane Beggan said his side won’t shy a way from the physicality that comes with the traditional 18-a-side Aussie Rules format.

“We are going to be challenging some very physical teams this year and each opponent brings something different to the field,” he said.

“We are confident that all the pre-work is done so we can hit the ground running.”

Renowned for their work ethic and passion, the Banshees have been relentlessly pushing one another to improve ahead of EC22. Attempting to remain cautiously optimistic for the tournament, as not to underestimate the competition, Beggan said he has been astonished at his squad’s commitment to stringent preparation and dedication.

He said, “Our team is straightening up very well. They all have been following and excelling at what is being asked of them.”

“I am liking the results I am seeing in each training and every time we bring them together. The Irish Banshees is a strong team inside and outside of the pitch.”

The Banshees proved their ability to succeed at both the nine and 18-a-side formats in 2019, but with some younger talent entering the squad for the first time, the change of codes could be challenging.

Beggan however, believes the benefits of training and playing in Ireland will make the switch a simple one to adjust to.

“In Ireland, we are lucky to have plenty of GAA grounds that are quite wide, so within our league we can field 13/14 a side games, which is not quite the oval shape, but we can get a very good sense of it,” he said.

“Some of the players have also experienced the 18 a-side games and this gets brought to the team’s mentality.

“Different aspects of the game are brought out in these bigger tournaments. The most important for me is just how hard-hitting the games always are. With that in mind for Euro Champs, the number one thing will be getting used to the longer quarters.”

Playing things close to the chest in terms of personnel, Beggan was reluctant to give too much away. However, he guaranteed the squad’s depth will be its greatest asset.

“Without a doubt, all 28 Irish Banshees players are the ones to keep your eyes on.”

“This side has a mix of experience and debutants, which is always exciting to see how they fuse together. The mentality that all these players bring is incredible, so expect to see some amazing footy from all of them.

“I am looking forward to seeing our hard work in action and I’m sure all the training will pay off. I am very proud of the team.”

Beyond just the footy side of things, Euro Champs is an opportunity for the AFL Europe community to come together and explore a new city. Beggan said his entire side “can’t wait to see what Zagreb has to offer”.

Perhaps hungrier for a win than any other side, this iteration of the Irish Warriors will be keen to make amends for falling just short of the Grand Final at Euro Cup.

An ever-present entity at European Championships, the Warriors are well accustomed to silverware, winning the tournament in 2010 and 2013, before coming runners-up in 2016.

“It’s the big time in terms of 18s AFL in Europe and only comes once every three years, so of course we’re excited for Euro Champs,” he said.

“League football and 9s footy are great, but full 18s on an oval is where you want to be!”

With 2013 being the last time the Warriors tasted victory and amidst their female counterpart’s recent dominance of the women’s competition, the Irish lads are keen to get in on the action and expect to contend for the title in Zagreb.

O’Sullivan said, “With new management and a host of new players, we’re confident we can better our 2019 placing of 3rd and perhaps go all the way this year.”

“We’re shaping up well. We’ve had a few trial games and open training sessions and have checked in on games in Ireland and abroad to source new talent.

“Couple those with the experience within the team, we have a nice mix and a team with a real focus and intent on giving everything in October.

“Team building is always difficult when players are still with their clubs for domestic finals and we don’t get together every week either,  but these boys have created a bond already with the limited time together and I’m excited to see what we can achieve with this group.”

As with the women’s side, the Warriors have been making use of Ireland’s makeshift ovals to facilitate a smooth transition from nine-a-side to 18s.

“We’ve used a mix of GAA & soccer pitches in an attempt to replicate the space available on a full-size oval,” O’Sullivan said.

“We’re aware that other countries have access to full ovals, so we want to be prepared as best we can for that. But our league plays 14s on a GAA field, so the space and gameplay is not completely foreign to us either.”

As usual, the Warriors will come in up for the fight and are excited to test themselves against Europe’s best.

“Croatia are hosting and will be a formidable team, GB are back-to-back champions, Germany are coming off the back of a very successful Euro Cup and France have an active league with teams that have performed well at Champions League and Euro Cup.”

“I’m looking forward to seeing how our boys measure up against the rest of Europe and if we can follow through on the promise shown at training.”

With over half the squad set to make their Euro Champs debut, there’s plenty of new blood within the Warrior’s squad. Beggan said he searched far and wide across the country to ensure he got the most talented and well-adjusted squad as possible – one with a mix of youth and experience.

It was a thorough selection process and “every one of those 28 players really earned their spot this year”.

He said, “It will be a testing week of footy, with 80mins of football to be played four days in a row, so it’s very much a squad game nowadays with every member of the 28 needed to compete. It will no doubt be a tough ask, but it’s what everyone wants to do – pit themselves against their peers and see how they measure up.”

“Croatia is a beautiful part of the world and the Croatians are avid AFL fans who will be fantastic hosts. I have no doubt they will have everything prepared and will put on a great show.

“The location looks great, and the idea of walking around Zagreb with a team of AFL players for a week is exciting, especially when there will be 10 AFL Teams doing the very same!”

Kick a Goal at the Eiffel Tower Review