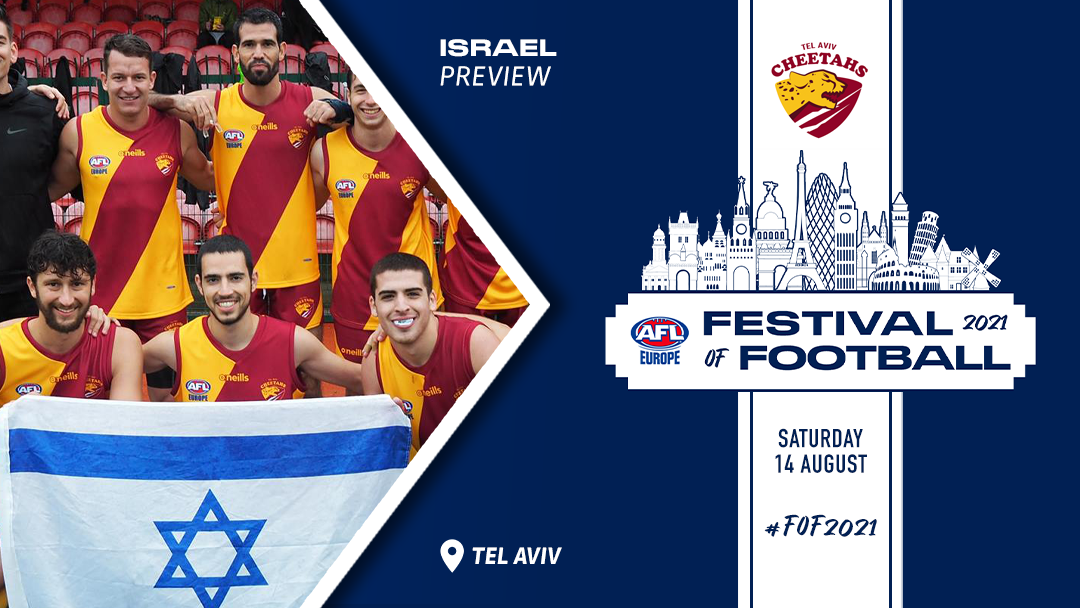 The 2021 AFL Europe Festival of Football will see nearly 15 countries and up to 50 teams competing in local tournaments across Europe and all on the same day of Saturday, August 14th. Preview the action that will go ahead in Tel Aviv, Israel.

AFL Israel look forward to participating in their first AFL Europe Festival of Football next month, hosting a three-team tournament at the multisport complex in Tel Aviv.

The Tel Aviv Cheetahs resumed training in March after not being able to play or train since September last year, when they held their last ‘game day’.

They have since seen player attendance at each training session continue to rise, and are hopeful of seeing up to 30 players attend the tournament next month. “Since our first few training sessions, we’ve done a big push on recruiting and have been going really well with numbers,” said Shir Shalev of AFL Israel.

“Throughout June and into early July, we’ve had more and more people get down to our sessions and we even played a 9-a-side match, which was good preparation for next month.”

The tournament on the 14th is likely to be an early start for the players in Tel Aviv, with temperatures in Israel looking to exceed 30 degrees.

Participants will be divided into three, 9-a-side teams; Tel Aviv Cheetahs , Tel Aviv Dragons, and a Jerusalem side. The three sides will play against each other once, before the top two teams proceed into a grand final to determine the day’s champion. Shalev said that everyone was looking forward to participating in this year’s Festival of Football event with the rest of the AFL Europe community.

“I really hope with the game day content on social media, where we can follow the action of all of the other countries who are participating, that our players will feel connected to AFL Europe and the community,” said Shalev.

“Whilst some of the players have played in an AFL Europe Euro Cup before, many haven’t either, so this will be their first experience of really being involved with the other teams in Europe.” Over the years, AFL Israel have been regular competitors at the Euro Cup however competed as their national team, Israeli Beasts, for the first time in 2019.

Prior to this, players in Israel had competed at the tournament as the Tel Aviv Cheetahs or Jerusalem Peace Lions.

With the cancellation of the 2021 event being recently announced, Shalev said that it will be important to focus training sessions, after the Festival of Football, on building towards next year’s Euro Cup, but also hopefully some more organised ‘game days’ in Israel later this year. “We will need to make sure we are keeping everyone active with something to train for. We’ve had a thought about doing some more ‘game days’, similar to what we’ve done in the past,” said Shalev.

“With as many people as possible at the Festival of Football, we’re hoping to have a lot of fun and build some good momentum going into the rest of the year.”

More information on the tournament in Tel Aviv, including how to register and participate, can be found here.

Good luck to all players in Israel and we look forward to seeing you involved in the event this year.