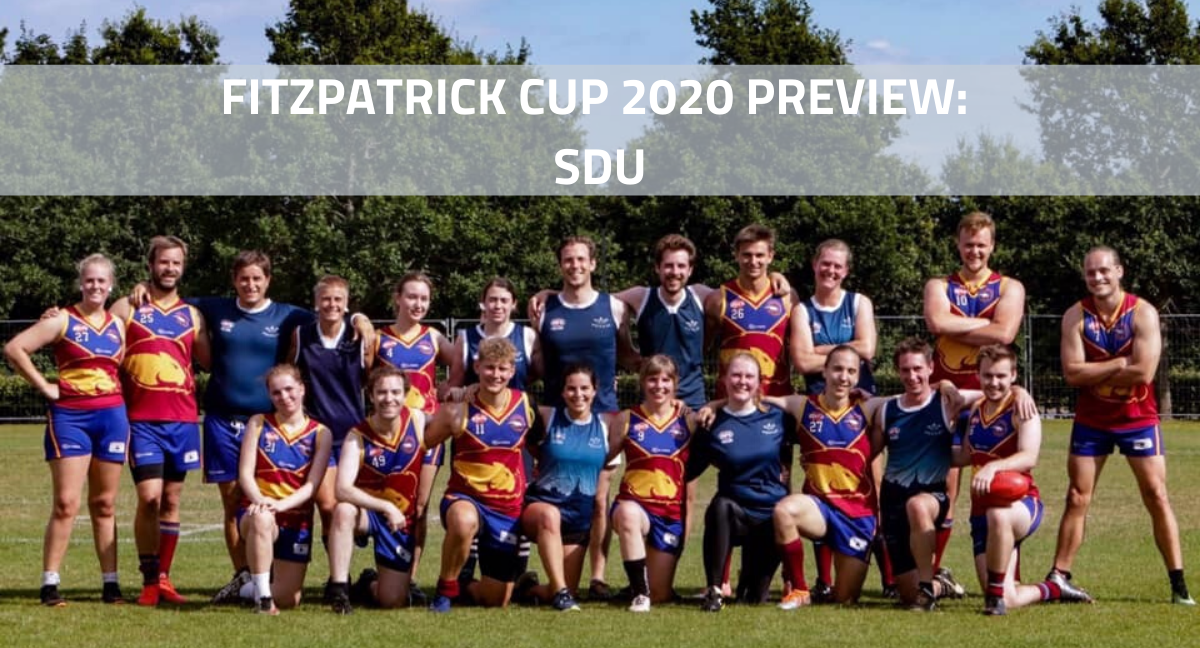 The 2020 edition of the Fitzpatrick Cup is just around the corner, with the finest University teams in Europe set to descend on Horspath Athletics Ground next Saturday, February 8th. Next up in our Team Previews are the debutants from Denmark, SDU, who will be travelling across to their inaugural Fitz with one men’s team. Below, we hear from SDU’s Morten Merhoj about how their brand new team is looking forward to the competition.

What has the last year looked like for SDU?
In Denmark University Sports is not something we have tradition for. Therefore a few years back a student organization called SDU Sports Odense was made to try and change that. The purpose was to facilitate sports and teams for the university students. Last year in 2019 a group of students came together to play Australian Football during winter at the university. The result was the first ever University game of Australian Football in Denmark, this was against Oxford University who traveled all the way to come play against us. This was also the first ever international sporting event for SDU Sport Odense.
What’s the aim of the team for this years competition?
The SDU team is very new and therefore most of our players have little experience. Actually 6 players on the team will have their very first game during the Fitzpatrick Cup. The aim is therefore to do better than our ranking but most of all to give our players the experience of playing competitive footy and have a great time in Oxford seeing many of our friends from last years game again.
How’s the squad feeling coming into their debut Fitzpatrick Cup?
Everyone is excited about participating in a University tournament and for those who have played before, looking forward to some new opponents. We have no idea how strong the other university teams are, so we do not now what to expect, but it will surely be great fun. We have our fingers crossed for some wet and muddy football and hopefully only a little snow.
Any young stars to keep our eye on?
The team has a group of experienced played with names like Kasper Høegh and Frederik Sander, who also played with the Danish national team during the European Championship last year. The new potential stars to look for is Frederik Rolsted and Johan Mikkelsen with only a month of training they have already demonstrated the spirit to learn and fight, something we will need during the tournament.
What’s the key strength of the team?
The key strengths of our team will be the leadership from the core group of experienced players. The players who have played before with the local team in Odense are very good at lifting and teaching the new players. I therefore expect the leaning curve to go up fast and see some good plays during the tournament involving some of the new players.
Who’s the coach in charge for this tournament?
The coach of SDUs Australian Football team is a legend. His name is Axel Bjerg, that translates into: Axel the Mountain. He injured his knee last year and is sidelined for 2020, so while he is standing there he might as well scream at the rest of us. The Mountain has also won the best moustache award three years in a row and will lead not only the tournament but also the after-party.
https://afleurope.org/wp-content/uploads/2020/01/FITZPATRICK-CUP-2020-PREVIEW_-SDU.png 648 1200 afleurope http://afleurope.org/wp-content/uploads/2021/08/AFLEurope-3.png afleurope2020-01-30 10:14:182020-01-30 10:14:18Fitzpatrick Cup 2020 Team Previews: SDU