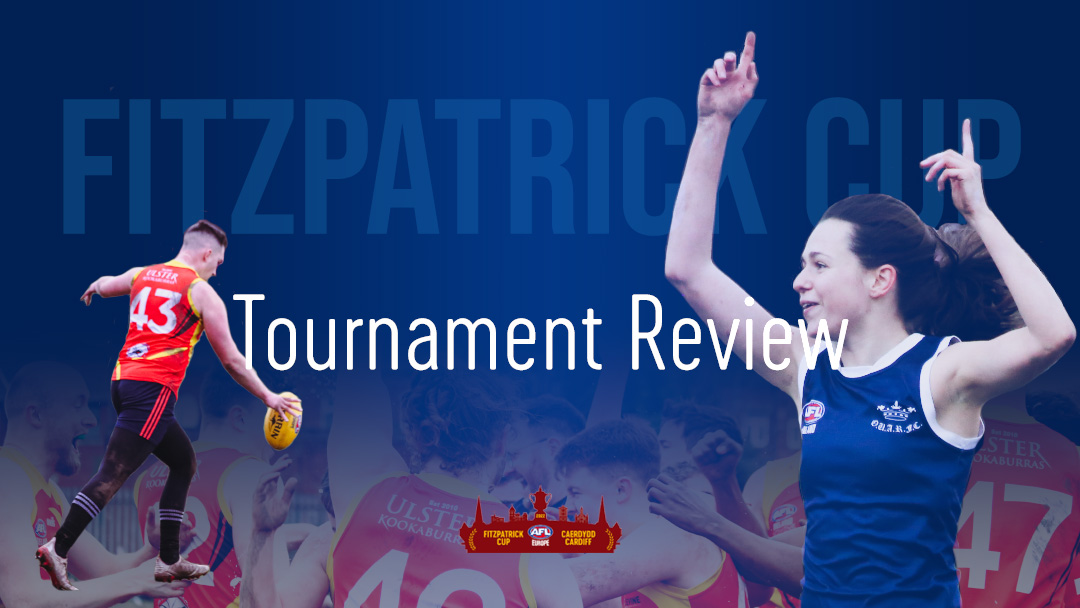 Over the weekend, Cardiff played host to the return of the Fitzpatrick Cup, where some of Europe’s best university teams descended upon the Welsh capital with one collective goal – to be crowned champions.

After a year off tournament competition, each university squad had seen plenty of turnover in personnel, making it almost impossible to pick a winner ahead of the day. As always, Cambridge, Oxford and Birmingham universities brought along a strong collective of female and male footballers, while hosts Cardiff Met returned to the tournament for just the second time and Queens University Belfast made its Fitzpatrick Cup debut in the men’s competition.

QUB became the first ever Northern Irish team to compete in the Fitz Cup, a significant milestone for both the club and Aussie Rules in the United Kingdom. With just three universities competing in the women’s competition this year, the results of the round robin would determine the victor in a Premier League style format, making every match-up extremely high stakes.

The day commenced with the reignition of the age-old rivalry between Oxford and Cambridge. Reigning champion, Cambridge, was hoping to mark its authority on the competition from the start but was stopped dead in its tracks and held scoreless by its bitter rival. After a nervous opening half, Oxford, under the tutelage of its new coach, former Brisbane Lions defender, Justin Clarke, pulled itself together and started the day with a win.

Birmingham university was perhaps the surprise of the women’s competition, coming into the day with some new team members set to make not only their Fitzpatrick Cup debut but Australian Rules Football debut. Despite the team’s lack of experience, it was the most ferocious of the three teams, losing honourably to a red-hot Oxford before resoundingly defeating Cambridge, leaving the 2020 champs shellshocked.

Ultimately, Oxford’s on-field organisation and squad depth made it too strong for its competitors, winning all its matchups on route to being crowned 2022 Fitzpatrick Cup champions for the women’s competition. A deserving win and a terrific comeback after the heartbreak of 2020, where it lost on the final kick of the day in-front of its home fans. With Justin Clarke at the helm and following an undefeated Fitz Cup run, expect Oxford to be the team to beat throughout 2022.

Second place Birmingham will take plenty of positives away from its 2022 Fitz Cup, getting valuable game-time into some first-time footballers and earning a first win of 2022 against Cambridge – a team which has been a perennial force in European university Aussie rules for years.

It is perhaps that same perennial force which will feel most disappointed after the 2022 Fitz Cup, going winless across the entirety of the tournament. However, as its side was largely depleted due to European AFL trials, don’t expect Cambridge to be down for long. With a varsity match against Oxford on the horizon next month, the 2020 champs will be eager to bounce back.

With five teams in the men’s tournament, a round robin would decide the two universities that would meet in the Grand Final and which of the remaining sides would clash in the third-place playoff.

With an enormous squad and a wealth of experience, Oxford looked to be the strongest outfit as the day commenced and started it’s 2022 campaign with a dramatic one-point victory over Birmingham.

Birmingham’s inconsistency proved to be its Achilles heel, serving up an inspired effort in an honourable loss against competition favourites Oxford and an imperious display in a resounding win over Cardiff, before suffering a surprise defeat to an undercooked Cambridge.

Despite the victory against Birmingham, Cambridge struggled throughout the day, losing all its remaining matches. With Cambridge lacklustre and Birmingham up-and-down, it appeared Oxford was set to cruise to victory and become dual champions across both the men’s and women’s competitions.

Then tournament debutants QUB stepped into the fray.

The boys from Belfast said they didn’t know what to expect ahead of the competition and honestly, nobody knew what to expect from them either. Based off QUB’s display, it would be wise for the rest of the competition to hire some scouts in future to ensure no more surprises next year. QUB’s big frames and fiery team spirit fuelled the Northern Irish past all its competition in the round robin, including Oxford, and it finished on top of the table, booking itself a ticket to the Grand Final in the afternoon.

As for the tournament hosts, Cardiff Met, the South Walians were unable to pull themselves off the bottom of the table but did earn a first victory in over two years in an inspired effort against Cambridge, leading to some of the biggest celebrations of the day.

With some much-needed experience against high level competition and a win on home soil, the Cardiff lads should be proud of their efforts, and are to be commended for the way in which they hosted the day and carried themselves with such dignity and fighting-spirit. Birmingham and Cambridge met in a rematch for third place, with Birmingham out for redemption against a side which cost it a potential Grand Final birth. Cambridge started strong and appeared to have Birmingham’s measure, but the men from the midlands refused to be denied a top three finish and stormed home to a resounding win. The final score was: Birmingham 5.4. (34) def. Cambridge 1.2 (8)

The men’s Grand Final was the highlight of the day and the quality of football on display exemplified how far footy has come across European universities. Impossible dribble kick goals, some big grabs and a couple of bone-crunching tackles perfectly personified the bitter affair between Oxford and QUB. QUB, seeking a debut victory and a true fairy-tale run, got itself out to an early lead. However, Oxford, hungry to finally take home a men’s Fitz Cup in its seventh attempt, wasn’t going down without a fight and clawed its way back into the contest. In the end, the underdog wasn’t to be denied and QUB emerged victorious and promptly treated spectators to a rousing rendition of “she’s a maniac” as it celebrated being crowned champions in its first ever Fitzpatrick Cup. The final score was: QUB 5.2 (32) def. Oxford 2.2 (14)

Women’s player of the tournament

Men’s player of the tournament

Umpire of the tournament

A huge thank you to all our umpires, pitch managers, physios, photographers, videographers, coaches and players for contributing to a fantastic tournament and a grand return to AFL Europe competition. To see the Fitzpatrick Cup back in action after such a long break and kick off our 2022 events so successfully is a testimony to the hard work and support of so many incredible people.

A special thanks to AFL England and Wales, Cardiff Metropolitan and its president, Conor Cronnin, for being such welcoming hosts. We can’t wait to see everyone back next year!

Photo and video content from the day can be found across our website and social media, links below.