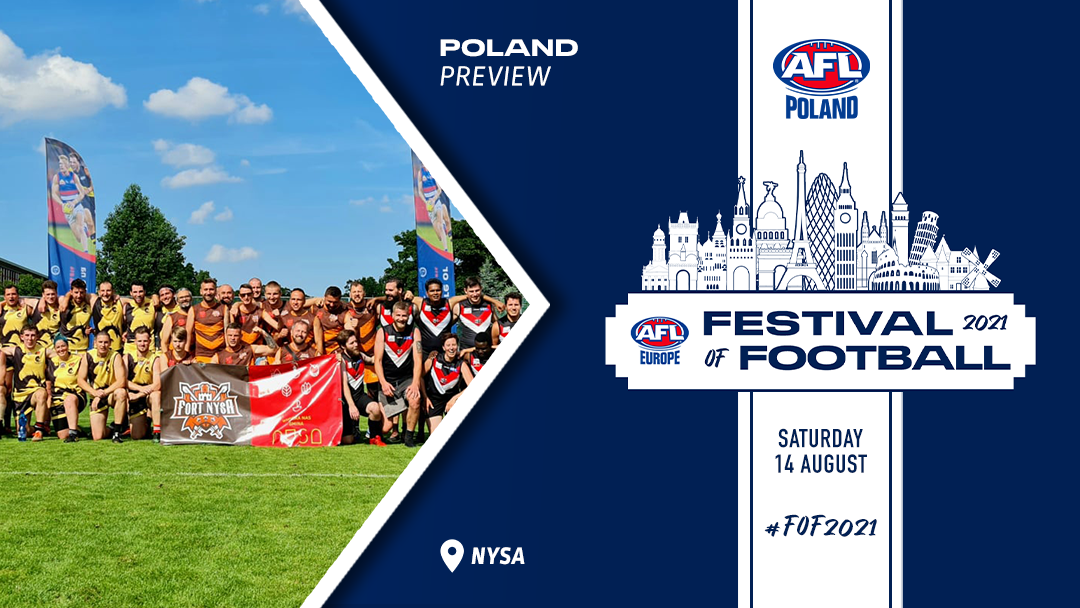 The 2021 AFL Europe Festival of Football will see nearly 15 countries and up to 50 teams competing in local tournaments across Europe and all on the same day of Saturday, August 14th. This year, Poland will be joined by the Czech Republic as a total of five teams will head to the south-west of Poland to compete in a tournament in Nysa.

Fort Nysa FC, Warsaw Bisons, Warsaw Boars and the Wrocław Lions will welcome the Prague Dragons in what will be no ordinary tournament in Nysa, Poland for the AFL Europe Festival of Football this weekend.

Whilst the five teams will be competing for the title of ‘champion club’ in Czech Republic and Poland, all (Polish) players will be at their best, vying for a spot in Poland’s Australian Football national side.

That’s right, the games this weekend will also be a selection camp for the Polish Devils, as players will be playing for a chance to represent their country in upcoming international matches. Przemysław Król, who is co-captain in Warsaw and has represented the Polish Devils in the past, shared his excitement about the opportunity to compete for a spot in the side.

“For the first time, we are having a proper selection process which has everyone really excited,” said Król.

“This is the first time players will have such high stakes to our game… We are getting watched and everyone will be thinking about how they can best compete for a position in the national side.” Playing a key role in the selection of the national side is Devils head coach, and who regularly volunteers as an umpire, Roger Scott. Scott will be taking a break from officiating this weekend to have all eyes on selection and shared a little bit about the selection process that AFL Poland and the Polish Devils are thrilled to be doing for the first time.

“We want to see players putting into practice the footy skills that they’ve learned at training,” said Scott.

“Little things like timing their leads, or being able to spread and find space… that’s what we want to see. It’s not necessarily about getting the most touches or kicking the most goals. As evident by the introduction of a national team selection process, AFL Poland have taken huge strides since last year’s Festival of Football in September.

The four-team tournament they held in Wrocław marked their first-ever all-Poland Australian Football tournament, as well as the debut of the Wrocław Lions and Fort Nysa Rugby Football Club.

Heading into this year’s tournament, all teams have enjoyed regular training and friendlies against each other, including travelling to Czech Republic in June to face the Prague Dragons.

The Dragons have also enjoyed getting back into competitive footy this year, and held round four of the 2021 Czech Cup just last weekend. “We want to use this tournament to bring attention to the sport for families and kids, so they can see us playing footy but also through some of the activities we will run for the kids,” said Latawaski.

“Jumping castle, slides, dancing between the games… all the promotion we’ve been doing on radio, local TV and Facebook, we are hoping for around 300 people to attend.

“We don’t want it to be just a tournament. We want families to come and get involved in our club. We’ve started an Auskick program here in Nysa, we want to go into the schools and we want to start a women’s team.” All of AFL Poland, including Vice President Geoff Puzzi, are extremely proud to see the growth of the sport in the past year, particularly through such challenging times, and are excited for the future that lies ahead for Australian Football in the country.

Towards the end of August, Fort Nysa will be looking to further increase the awareness of the sport in Poland by hosting a beach tournament made up of teams of five playing in games of strictly handballing.

The soon to be selected Polish Devils are also eager to get a few games in where possible and safe to do so.

“We have one more fixtured match between the Boars and Bisons in Warsaw, but after that our preference would be to (hopefully) travel,” said Puzzi. “Last year at the Festival of Football we learned a lot about how to plan and have a safe tournament.

“We’ve been in chats with a couple of neighbouring countries and teams to plan an event later this year, so hopefully we can go ahead with some international friendlies then.”

Teams in Russia ready to build on last year’s Festival of Football success...