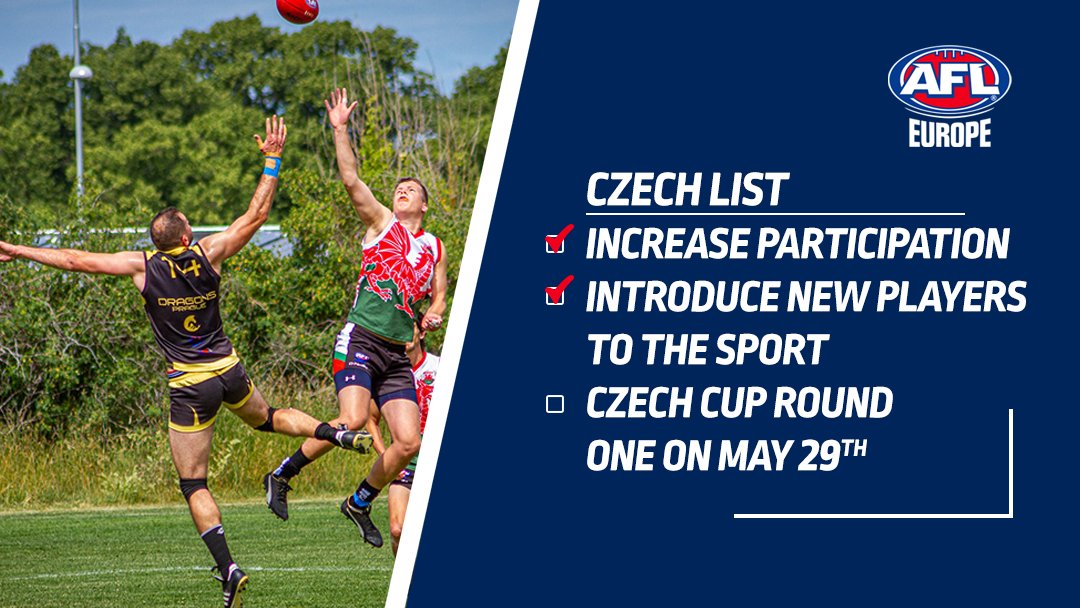 After months of training and plenty of patience, the Czech Republic is looking forward to commencing the 2021 Czech Cup this Saturday, May 29th.

Round one comes with plenty of excitement for the growing number of participating men and women in the country, as Prague welcomes the return of competitive footy with two teams.

Credit to all involved with AFL Czech Republic, who have recently grown the Prague Dragons to be able to separate into the two teams of Prague Devils and Prague Golems.

The two clubs will form the 9-a-side, mixed competition which currently has two rounds scheduled. National Head Coach, Paul Briedis, shared his excitement for the upcoming weekend and cannot wait to see the two teams go head-to-head in the country’s capital.

“Round one of the Czech Cup is going to be great for the players and club administrators to finally get some reward for all of the trainings and work they’ve put in through the winter and spring,” said Briedis.

“We’ve had some really good growth and momentum over these past six months, which has allowed us to expand the Prague Dragons into two seperate teams; Devils and Golems.

“This weekend will also see about a third of our players play their first-ever game of Australian Football, which makes the return of footy on Saturday all the more special.” It has indeed been many months of patiently waiting for all involved with Australian Football in Europe, however some teams were fortunate to get a few games underway last year where local and travel restrictions had lifted.

The Dragons were one of those teams and in late-July, visited Vienna, Austria to face the Galahs and soon after travelled north to Dresden, Germany to face the Wolves.

However, plans to join the teams in Poland for the Festival of Football in September were unfortunately cancelled. Fixtures beyond round two of the 2021 Czech Cup are yet to be confirmed, as the league awaits further announcements around national restrictions.

For the remainder of the year, Czech will once again be looking to visit nearby countries and play opposing teams in friendlies – including Vienna, Warsaw, Nysa and Dresden – should all teams and players be permitted to travel and play.

Czech Republic have previously competed in the Central European Australian Football League and will no doubt be ready to get straight back into it once the competition can safely return.