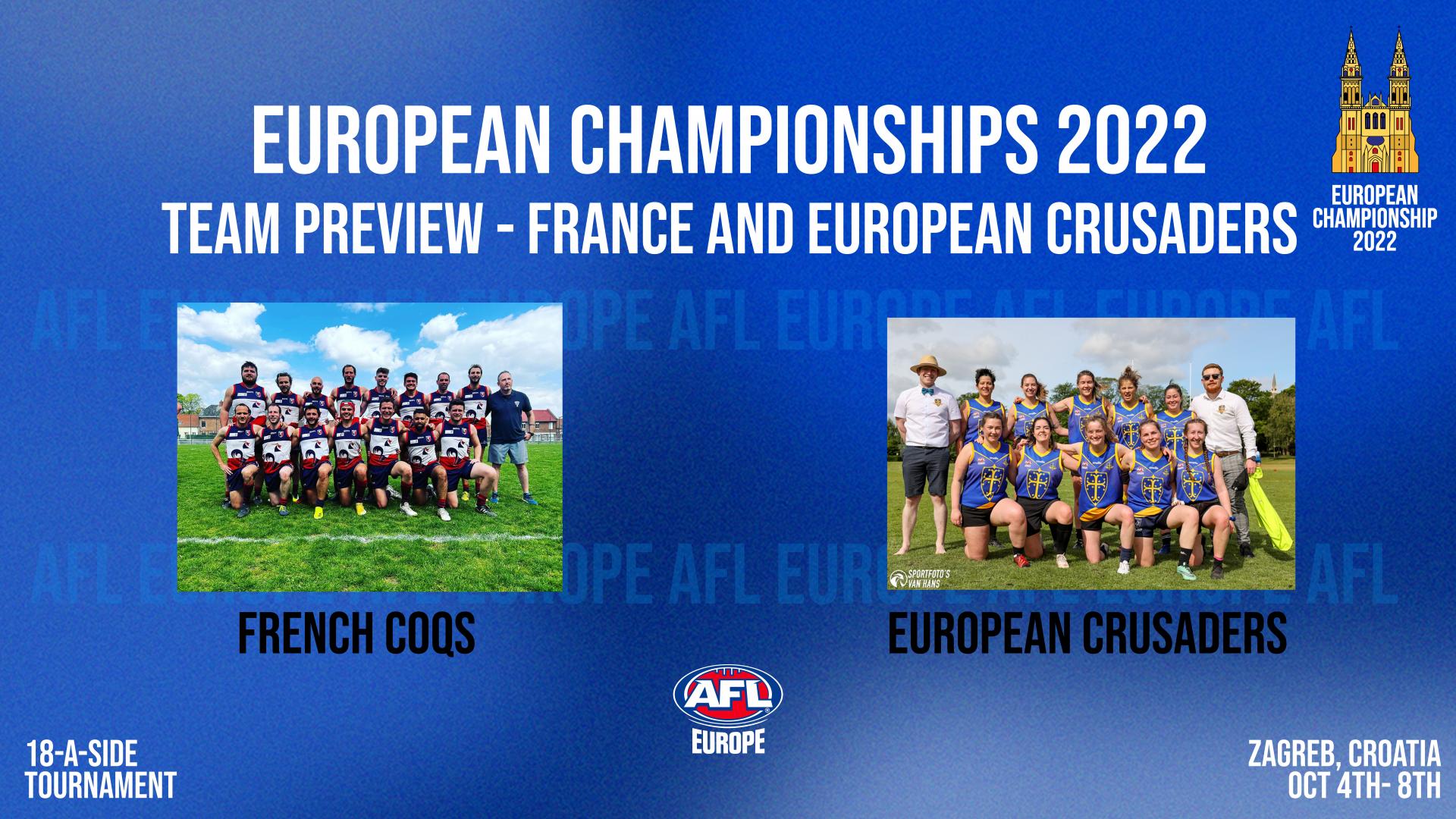 In the fifth and final edition of our tournament previews, we spoke to the team managers from the French Coqs and the European Crusaders. Both sides are ecstatic to be playing 18-a-side footy and are as hungry to win as ever.

Following its debut European Championships in 2019, the French Coqs will hope to improve upon its fifth placed finish from last time around. Having improved immensely over the past three years and brought in a new coaching staff, the sides expectations for EC22 will be higher, particularly following competitive showings at Euro Cup and against the Australian Spirit in the ANZAC Cup earlier this year.

With IC 2020 being cancelled due to the pandemic and IC 2023 being postponed to 2024, EC22 stands as one of the rare opportunities for this French side to play 18-a-side footy as a team, which has the squad hugely excited.

Team manager Nicolas Boch​é said despite winning four of their six matches at Euro Cup in Edinburgh, the team was left feeling frustrated after only managing 7th place and losing their final.

“French players are waiting for a chance to prove their level is higher than that. We will claim a spot on the podium this time as one of the best teams in Europe,” Boché said.

Following France’s recent inter-season summer break, the squad commenced training in Paris at AFL Europe’s Kick a Goal at the Eiffel Tower event, which served as a great opportunity for the squad to get back into its rhythm and play together.

Boché said it was terrific not only to train together again, but that the after party allowed for some crucial team bonding to take place which has lifted everyone’s sprits ahead of EC22 next week.

The biggest challenge however, has been preparing for 18-a-side footy but rest assured, the Coq’s coach is their ace in the hole.

“​In France, unfortunately, we don’t have 18-a-side facilities yet so it’s a bit difficult to prepare specifically to this format of the game,” Boché said.

“However, we have players that experienced full size footy in Australia during ICs 2014 and 2017 and our coach Jason Quinn has previously coached professional teams down under, so no doubt he will help us adapting our game to 18-a-side.”

A new coach isn’t all the French side is bringing to Croatia. The squad will see a few new faces make their tournament debuts, as well as some familiar faces return for another run at silverware.

Like all sides, the Coq’s have prioritised picking a squad with equal parts experience and youth, something particularly important for 18-a-side footy because of its chaotic nature.

Boché said of the squad: “You should keep an eye on Logan Bonhomovic, currently living and playing in Australia for one year who will come back to Europe for the occasion. Louis Jamart is also playing 18-a-side abroad and just won the AFL London Social Premiership with the Sussex Swans.”

“Further, Anthony Boubet, Team of the Tournament’s member in Edinburgh, will surely show some more great skills and continue his strong form. Some other good players will make their debuts with the French Coqs in Croatia too, but they already demonstrated they have the skills and spirit to be part of the team so no doubt the integration will be a success!

​“It will be the first time in Croatia for most of the team so we are really excited about discovering this country and especially the city of Zagreb.”

The latest iteration of the European Crusaders will be primarily made up of the French Gauloises, who are all excited to make their European Championships debut. Rounding out the squad will be some added support with players from the likes of Belgium, etc, etc which serves as a great opportunity for these individuals from countries still in their AFL infancy to get a taste of international competition.

It has been an enormous effort for the Crusaders to put a squad together that has enough depth to meet the demands of 18s Aussie Rules, so the side is hungry to do itself justice and has been working hard to ensure their bring their best footy to the table.

Team manager, Camille Portal, said the recent Kick a Goal at the Eiffel Tower event in Paris was a terrific way to solidify the squad and train together, ensuring everyone with a ticket to Croatia feels a part of the team and knows what to expect.

She said, “Some of the girls had the chance to play 18-a-side during the IC17, plus one or two girls used to play in London, so we feel somewhat prepared for the jump to 18s.”

“Additionally, we have been and will continue to watch AFLW games back in Australia in order to get a better understanding of how this version of the game unfolds.”

Understanding the depth and strength of their competition, the Crusaders have tempered their expectations and are extremely happy to have put a team together. However, although they are prioritising “fun and sharing great moments with all the teams”, this squad has proven its pedigree and competitive fire in the past.

“Margaux Semene, Myriam Allali and Delphine Ouvrard are the girls to watch,” Portal said. The trio are in extremely good form and won’t shy away from shouldering the responsibility of leading their team by example. Expect them all to see plenty of the footy.

“We just can’t wait to be there,” Portal said.