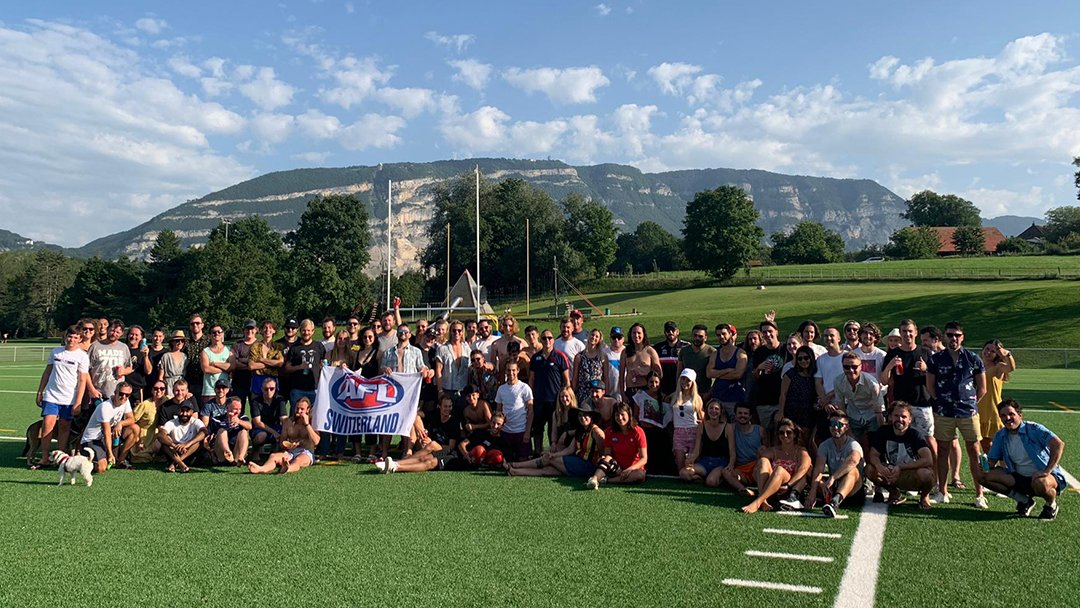 Round three of the AFL Switzerland competition combined with the AFL Europe Festival of Football on August 14th. Review the four games that took place thanks to Reporter for AFL Switzerland, Keelan Senn, as the Swiss community prepares for their final round of the regular season this weekend.

The Festival of Football and round three of the AFL Switzerland season was held in Vessy, Geneva and coincidentally fell on the hottest weekend of the year in Switzerland.

As always, there was a lot of excitement going into the day but with the temperature soaring above 30°C, and the games being played on astro-turf, made everyone very aware that it was going to be a tough day out. In the first game of the day, the Jets took on the Giants. The game took a while to open up with both teams being very well organised early on, and not giving the opposition much of a chance.

But on a hot day like it was, it was only a matter of time until either team started to crack. It was the Jets who proved fitter over the full length of the game, with great performances from some of their key men like Tommy Ross and Brad McConnachy really going to work in the second half.

In the end it showed on the scoreboard, but the Giants must be applauded for their valiant effort defensively, especially in the first half. It must also be said that the Giants were missing some key players which didn’t allow them much rotation, costly on a day like this. The Jets are the strongest team in the league, and everyone knows that, but the fact that they had already played a full game in the blistering sun and were coming up against a fresh Lions team added an interesting twist to the game.

And indeed, the Lions had a strong start to the game to kick the first goal and played with great physicality in the contests. The game seemed wide open in the first half with the Lions winning majority of the the hit-outs thanks to their dominant young-gun ruckman, Emmanuele Zanoli.

However, in the second half the game turned in the Jets favour. The Lions started to feel the heat and couldn’t keep up with the pace and sheer class that the Geneva Jets possess. The Jets once again proved their fitness, winning two games in a row and in these conditions, was seriously impressive and deserves a lot of respect. In the final seniors match of round three, the Lions took on the Giants in what proved to be a thriller. Both teams suffered defeats earlier in the day and both teams were willing to leave everything out there for that first win of the day.

The Lions were winning the clearance count but the Giants played with great accuracy, as captain Andrew Dormbierer and key forward Tim Pendlebury would link up and cause damage on multiple occasions.

With scores level at half time, both teams felt like it was theirs to win. The Lions, who were still in search of their first win of the year didn’t want to let this opportunity go and came out firing in the second half.

Especially captain Stefan Burgener and experienced big man Jacob Brownley, who attacked relentlessly and eventually tipped the game in the Lions favour. The Giants however never gave up and made it a great contest for the full length of the game.

In the end, the Lions finally got their first win of the year, however after a very competitive day of footy everyone should consider themselves a winner. The final match of the day was the reserves game. It was awesome to see a lot of new faces out there competing very hard and showing that AFL Switzerland has a bright future ahead.

The Jets had a younger side with a lot of their players coming from a soccer background and showing their fitness, running circles around the Dragons at times. The Dragons however stuck to their game plan and had some great passages of play themselves.

The game was played over four 15-minute quarters and the Dragons, who had some players who had already played in the seniors, just couldn’t keep up over the distance of the match. Relative beginner Clemens Bourgeois kicked one of the best goals you’ve ever seen, booting it straight through the middle with the outside of the foot on the run from the boundary. After the final game, all teams got together and celebrated an awesome day out with the Geneva Jets once again proving to be great hosts with a buffet full of tasty snacks and good vibes all around.

It was a massive turnout with not only lots of players but also lots of fans, friends and family showing up and making it a great Festival of Football and AFL Switzerland round three.

Festival of Football Team of the Tournament

Festival of Football Players of the Tournament