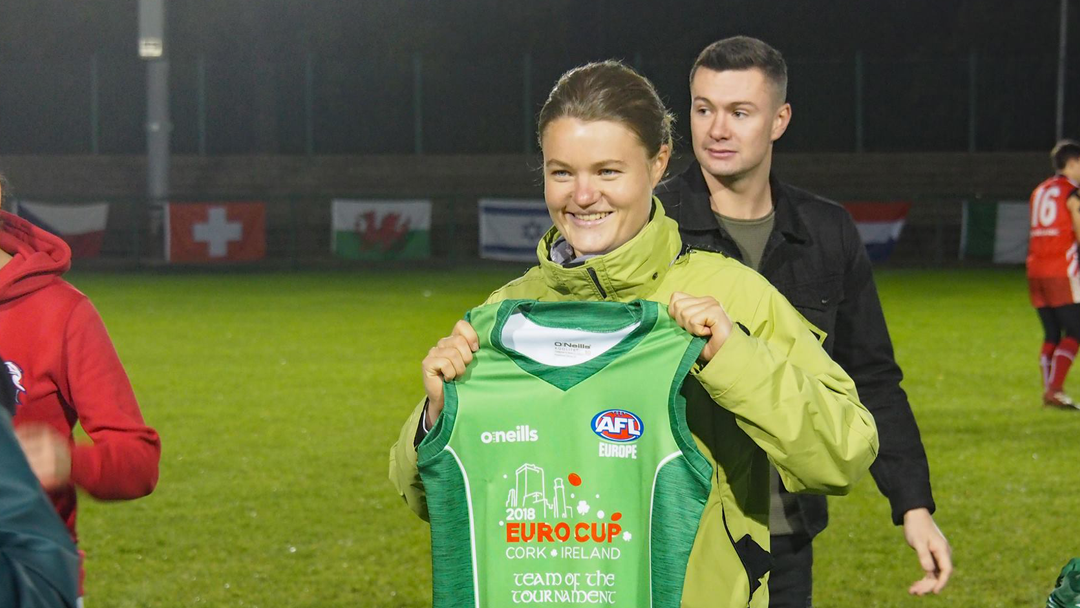 German Eagles and former Hamburg Dockers star, Theresia Meißner, has been selected to make her debut for the Geelong Cats Victorian Football League women’s side this weekend.

The Cats will take on Collingwood in Round 1 of the VFLW season tomorrow (27th February) at 12:00PM AEDT.

Meißner moved to Australia at the end of 2019, having only played Australian Football for just over a year, and is the first German National to sign with a VFLW side. Meißner was a star on the AFL Europe footy scene, collecting a number of accolades including Team of the Tournament honours at the 2018 Euro Cup in Cork, 2019 Champions League in Amsterdam and 2019 European Championships in London.

Her performance with Hamburg at the 2019 Champions League would also see her named as captain of the Team of the Tournament. Through that same year, Meißner won the Dockers Best & Fairest award in a Hamburg side that would go on to win the inaugural AFL Germany Women’s grand final. Despite being in Australia, Meißner has remained involved with her Eagles and Dockers teammates, keeping in contact and taking part in AFL Europe’s Race to the MCG last year.

The Race to the MCG invited AFL Europe’s participating countries to put together a team of 30 to run the distance from London to the Melbourne Cricket Ground (16,900km) in both a men’s and women’s competition. Kilometres were logged by participants and then accumulated by AFL Europe, with a ‘top performer’ from each competition recognised weekly.

By no surprise, Meißner was soon to be applauded and named as one of the women’s top performances. Meißner will be joined by a handful of former AFL Europe players in the VFLW this year.

Aisling Curley, who has been selected to play for the Southern Saints, represented the victorious Irish Banshees at the 2018 Euro Cup in Cork and played in the Harvey Norman AFL Ireland Women’s competition.

Katie Stone from the Western Bulldogs represented Australia Spirit in the 2018 ANZAC Cup, and played for Oxford Uni and North London Lions in the AFL London competition.

Amanda Maginn is another Irish representative who played in the AFL Ireland Women’s league, and represented the Irish Banshees when they won the AFL’s 2017 International Cup.

As per the AFLW website, matches this weekend will be streamed through the VFLW digital channels.