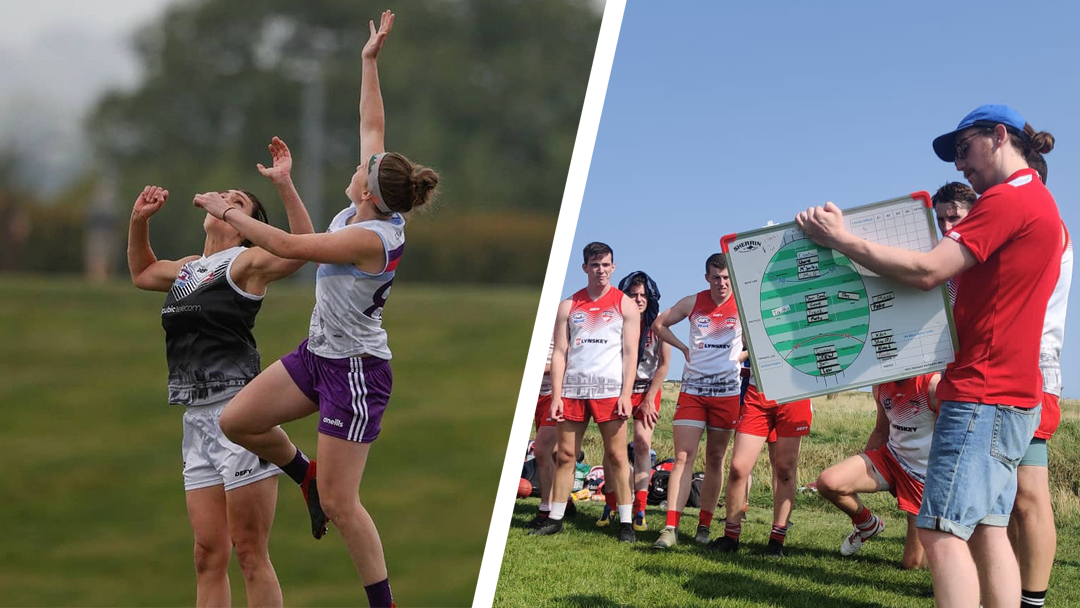 The men’s and women’s footy seasons continue in Ireland as the league approaches finals. Check out the latest action thanks to Reporter for AFL Ireland, Stephen O’Sullivan.

The Swans were back on the road, this time The Swamp in Claddagh was the venue for their round four match-up with the Galway Magpies. The Magpies would have gained encouragement from their first win of the season during the Festival of Football, and it just so happened to have come against the same opposition.

For the Dublin outfit, they knew a win would cement a place in the preliminary final, at least.

The Swans needed no more encouragement than the promise of finals footy. Ben Coughlan, playing in a more advanced role, set the tone for the afternoon early on. Presenting well on the lead, he managed a couple of early impressive contested marks, with matching accuracy in front of goal. Shaun Murphy was at his usual best early on, kicking two majors, including a goal from the boundary for the Magpies. With their fast, hard-working midfield, the Swans took control and added further goals through the impressive Frank O’Donnell and Connor Dunne. Seamus McSorley marked his first competitive start for Swans with a goal and also played his part in the Swans stubborn defence for part of the game.

The Maggies produced their best footy in the second quarter. Once more Shaun ‘Smurf’ Murphy got on the scoresheet, along with Mark Kavanagh, as they matched their Dublin counterparts in the goal kicking stakes, each booting three in the second term. The Swans, however, would edge further in front. Noah Copping snapped a clever goal in the dying stages for the Swans.

A tactical shift in defence in the third, allowed the Swans to capitalise in the forwards. Connor McGrorty and Shane Faulkner did a great job in marshalling the Magpies forward line, allowing just one goal against them through Darren Dennehy. Levi Kalms from the boundary and a trademark running goal from Connor Dunne responded for the Swans.

In the final term, early Galway goals from Murphy and Sean Madden highlighted their fighting spirit. The use of the interchange bench has been impressive from the Dublin side this season and they used that to great effect in the fourth quarter.

Capitalising on a tired Galway defence, Stephen O’Sullivan kicked three final term goals, the first a fantastic team goal through impressive handling in the midfield with Frank O’Donnell finally releasing to the small forward for a simple finish. Ben Coughlan grabbed his third of the day, again through intelligent leading and unerring accuracy off the boot.

In the end the South Dublin Swans remained top of the ladder after their most complete team performance of the season.  They even managed a few sociable drinks in the Claddagh sunshine with their Galway counterparts afterwards. The top two teams did battle once more, this time the Vikings taking home advantage. After winning the women’s Festival of Football in Ireland, the Cork girls would have been confident of avenging their opening round defeat at the hands of the Kooks.

Once more, Amanda Brosnan was dominant for the Cork outfit. The Kerry woman was flawless in the middle and booted a goal to match her performance. The Vikings set the pace in the first quarter, kicking six goals along with five behinds. The Ulster side remained within touching distance with three goals of their own.

Annie Walsh was once more in form for the Vikings. With an eye on the top scorers award she bagged five more goals to add to her tally on the day. The Vikings edged further in front with three more goals in the second term to their opponents one. The final two quarters were a near carbon copy in terms of scores. The Cork Vikings outscoring their Ulster rivals by five goals to two in each of the last two quarters. Eva Cafolla was fantastic for the Ulster Kookaburras. She remained on the scoring trail kicking three goals on the day, along with two from Elaine Maguire which ensured some pride for the hardworking Kooks.

Shannon Stevenson wasn’t to be left out. She added four goals to her season’s total, while Marie Keating and Rebecca Corbett grabbed hat-tricks apiece. The returning Caroline Condon also got on the scoresheet with a goal of her own.

An emphatic victory for the ever improving Vikings was capped off by memorable performances from their captain Maria Quirke and Amanda Brosnan, in the midfield.

It sets up a mouthwatering finish to the season as these two teams will surely do battle to the very end. A repeat of the opening round game, the Belfast Redbacks made the arduous journey south to Cork to take on the unbeaten Lions. The Redbacks themselves were impressive at the Festival of Football two weeks earlier. They cruised to the grand final and finally overcame the Leesiders in the final match to claim the title.

With Premiership points on the line this time around, the Redbacks needed to keep pace with the top two sides to enhance their chances of a home prelim.

In simple terms, this game was a cracker. Both sides cancelled each other out in pretty much every department, which is testament to the quality of players on show. Kevin Jones and Dean Skinner battled hard in the midfield for their respective sides, while both forward lines fought hard against hardworking defences. Darren O’Dwyer for the Lions was once more at his accurate best, kicking three goals in what was a relatively low scoring game in comparison to previous rounds. The Redbacks boasted a sharp shooter of their own, Kyle Devine wasn’t to be outdone and he kicked three majors to share top scorer on the day with O’Dwyer. The Tyrone man ensures goals and has been a welcome addition back into the Redbacks squad since round two.

In the backline for the Lions, James O’Callaghan had a fantastic game. Along with his defensive teammates, they managed to keep the free scoring Redbacks to eight goals on the day, which is an impressive stat.

The Lions forward line kept ticking over in round four. Padraic O’Connell and James O’Shea added two goals apiece to the scoreline. Gerard Walls and Sean Paul Henry were solid for the Redbacks and managed to quench the Lions forwards thirst for goals.

In a seesaw encounter it was the Leesiders who finally came out on top, outscoring the Redbacks by just ten-points. Both teams can take great encouragement from their battling performances and who knows, we may get another meeting between the two as we edge closer to finals footy. In this rescheduled round three encounter, the Cork Vikings showed why they were favourites for this season’s AFL Ireland Womens Premiership.

Playing in Tramore Valley Park, the free-scoring Vikings were relentless.

After an inaccurate first term, the Cork outfit soon found their feet. Amanda Brosnan once more starred in a fantastic performance by the whole Vikings side. Seeing plenty of the footy, Brosnan managed a game high seven goals. The Swans to their credit dug deep and Angie Crispe reflected the spirit of the newly formed side through hard work and determination in the middle of the field. The more experienced Vikings were in no mood to be generous, however, limited their opponents to just three-points in total. The Swans certainly weren’t helped through an early injury to their main goalscorer, Sorcha Nolan.

The Cork side grew in confidence as the game progressed. Annie Walsh added four to her tally while Caroline Condon, Maria Quirke and CJ Murphy each claimed two majors each.

It was a whitewash for the Cork Vikings in truth. The South Dublin Swans can be encouraged by the fight shown by their players and will get better as they gain more experience with each match.

Jets and Giants to meet in AFL Switzerland Grand Final