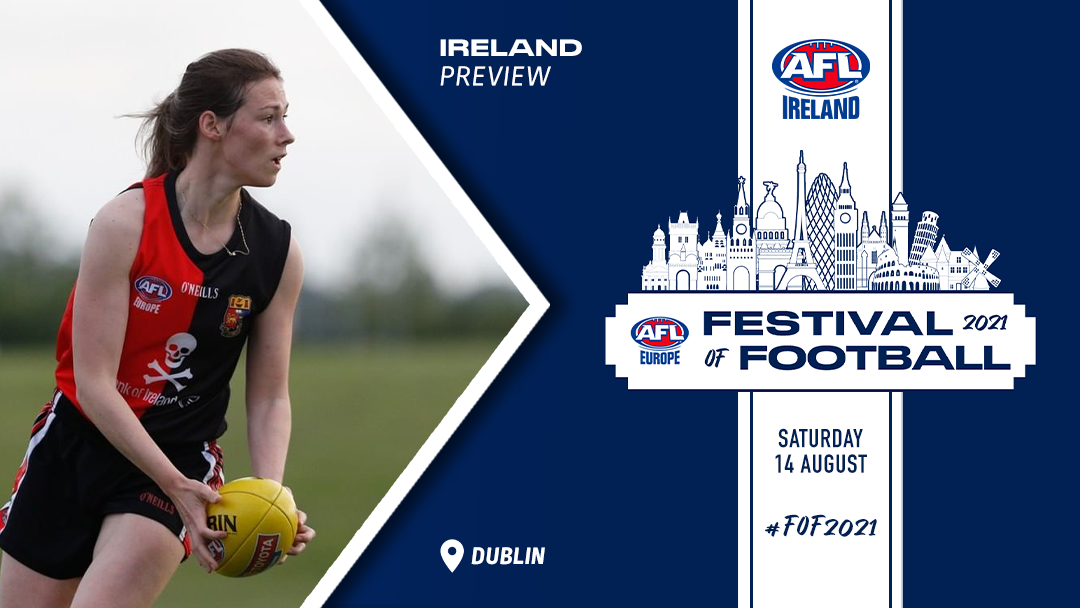 The 2021 AFL Europe Festival of Football will see nearly 15 countries and up to 50 teams competing in local tournaments across Europe and all on the same day of Saturday, August 14th. Preview the two tournaments going ahead in Ireland that will feature a total of 14 teams.

Two months into the return of competitive footy in Ireland this year and we’ve already seen the completion of the three-week Leeside League in Cork, three rounds of the men’s and women’s premiership seasons and just last weekend, AFL Ireland held a women’s carnival and men’s national team (Irish Warriors) trial matches.

Now, the players in Ireland will return for their second AFL Europe Festival of Football with ten more teams than last year! The two tournaments will each feature group stages with the top teams progressing through to finals, determining the men’s and women’s champions of the Festival of Football in Ireland.

Head Coach of the Irish Warriors and AFL Ireland Men’s Competition Representative, Eoin O’Sullivan, said he was looking forward to seeing the players in Ireland once again involved in the event. “I remember last year for us it was a bit on again, off again… In the end we were allowed to get some games played,” said O’Sullivan.

“We really enjoyed it last year. It was brilliant to be able to look up AFL Europe on your phone and see Austria were going well, or seeing the results up from Croatia.

“You really do feel like you’re a part of something bigger than the games going on in front of you. It’s not just Cork playing Dublin or Galway playing Belfast… This is spread out all over Europe.” Competing in the women’s tournament in Dublin are league teams Cork Vikings, South Dublin Swans and Ulster Kookaburras, as well as the Dublin Garrisons and Galway Magpies.

The Kookaburras, who currently lead Ireland’s 2021 women’s season undefeated, are in impressive form and in round one defeated the women’s Leeside League winners, Cork Vikings, by four goals.

Appearances from the Dublin Garrison and Galway Magpies this Saturday could shake things up, while the Vikings will be seeking redemption against the Kooks. The 2021 men’s season in Ireland recently featured a top of the table clash between Leeside and South Dublin, that the Lions ended comfortably with a 45-point win.

Despite this, O’Sullivan strongly believes that all teams are in for a chance to win it all in the 9-a-side tournament this Saturday.

“This year in the men’s it’s been great to see the likes of Galway recruiting some massive numbers,” said O’Sullivan. “With Dublin playing at home this weekend, I think they’ll be strong. But then again, anytime you’re up against Belfast, it’s a tough game.

“The Kerry Suns are still itching for their first win too, so I suspect they’ll be strong on Saturday as well.”

As Warriors head coach, O’Sullivan is eager to see how the men’s players fare off the back of the national team trial matches last weekend, but more so, is just happy to see all players in Ireland back playing Australian footy.

“We’ve had some close games in the Leeside League and our premiership seasons, there’s been some brilliant competition this year,” said O’Sullivan.

“To have the women’s and men’s teams all playing together on the same day and at the same venue for the Festival of Football, it’s going to be fantastic.” The action in Ireland will continue after the Festival of Football, resuming their 2021 season as well as other tournaments and competitions.

“After the premiership season, the girls are looking at doing a ‘Super 9’s’ series and the men’s are looking at other competitions similar to that of the Leeside League,” said O’Sullivan.

“There’s a lot of different winter competitions we’re hoping will go ahead, including the university seasons.

“No one wants to go another six months without footy, so there’ll be games played as much as possible.”

Teams in Russia ready to build on last year’s Festival of Football success...
Scroll to top