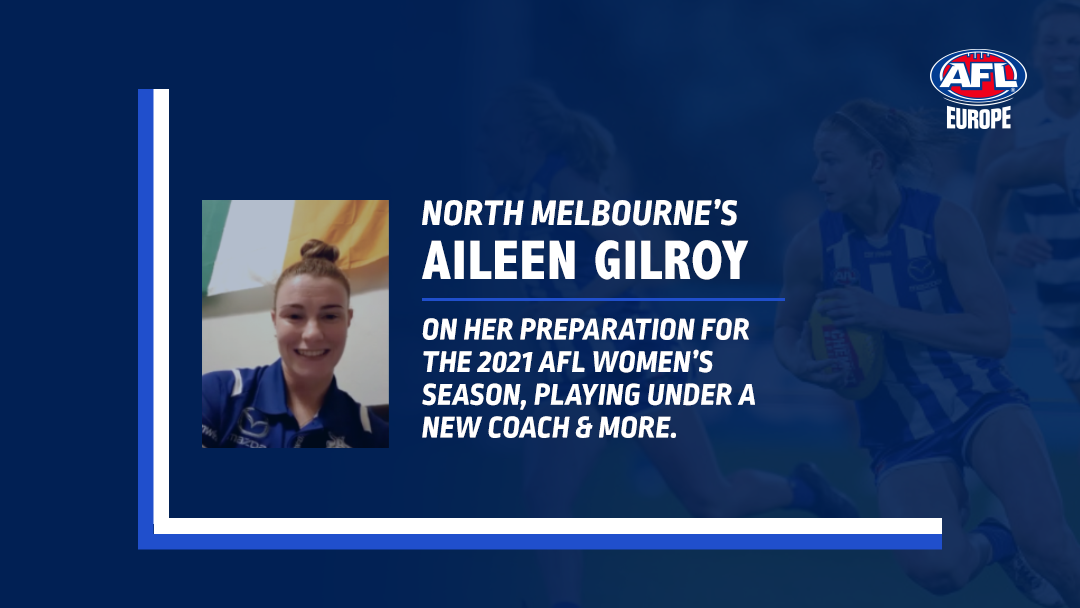 NORTH Melbourne’s Aileen Gilroy started the new AFLW season in fine fashion last Sunday, picking up where she left off following an outstanding debut season in 2020.

The defender picked up 13 disposals and an equal game-high seven tackles in the Kangaroos 62-point win over Geelong.

Recruited from County Mayo in Ireland, Gilroy will be looking to improve on a standout 2020 season, which saw her finish fifth in the Kangaroos best and fairest award.

“It was my first game in a long time, just under a year and I felt good,” she told AFL Europe.

“Round 1, the hits and the tackles were going in really hard so it was a shock to the system.

“I’m always looking to be a better player so I need to go back and review it again and see what I can improve on. I was happy for my first round; I think St Kilda now will bring something different to the table so we just need to take it step by step.”

Those already familiar with her work in her debut year would not have been shocked to see her leading the tackle count following the game.

The Kangaroos coach gave the Irish star two simple goals to improve on, one of which was her tackling.

“They are two aspects that I’m trying to improve and grow in the game. If I do that, I think I’ll keep improving as a player and hopefully I’ll help the team.

“I didn’t come out here for the fun of it or just to take part, I really want to make the team better.

“If I do that then I’m happy, the team will be happy and hopefully we will be successful.”

The Kangaroos are under the guidance of renowned coach Darren Crocker who took the reins during the offseason. A North Melbourne premiership player, Crocker has been a long-term member of the men’s team coaching ranks before taking on the AFLW job. 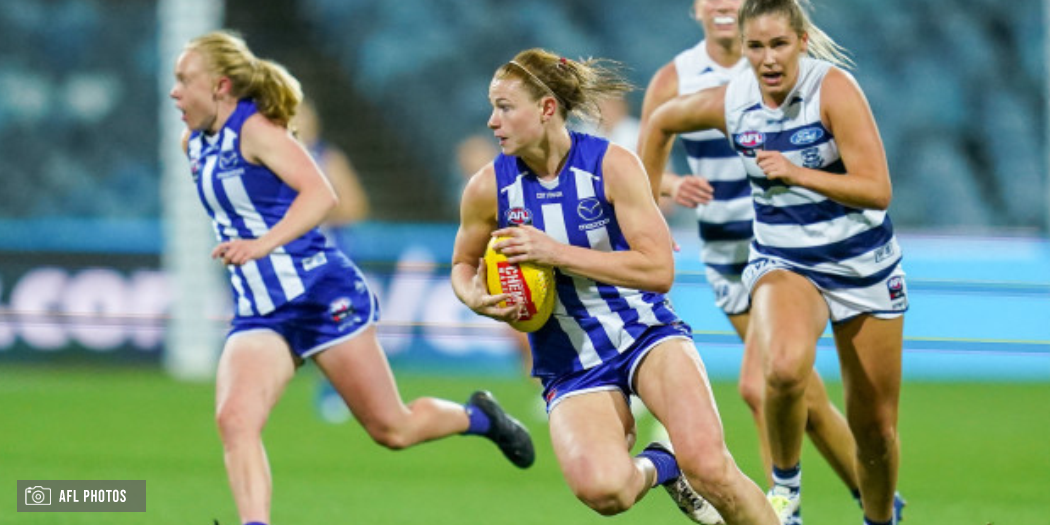 “He is absolutely amazing, even when I was in Ireland he was in contact with me straight away when he got the job,” Gilroy said.

“He wanted to know everything about me, what I could get better at, what I’m good at and what I thought I could bring to the team. That really intrigued me.

“I felt that when I came out here that my kicking skills weren’t up to scratch, he is the master of kicking so he has no bother taking me out for an extra 15 or 20 minutes giving me pointers. He’s been an amazing addition to the club.”

Following Mayo’s exit from the Gaelic football competition last year in Ireland, Gilroy’s focus quickly switched from the round-ball to the Sherrin.

Training sessions with Head of AFL Ireland Women’s & Irish National AFLW Coach Mike Currane, as well as pestering her boyfriend to kick the ball with her helped preparations for the AFLW season.

However, the comfort of knowing what to expect ahead of her second season was replaced by the uncertainty of COVID-19 and travel restrictions.

A two-week quarantine greeted her and other Irish players on their arrival into Perth, a challenge for anyone let alone elite athletes.

“At the start it was hard, there was no fresh air and that really was the hardest part,” she said of her time in hotel quarantine.

“It went fast in the end but you really don’t have a choice, I’m delighted to have the opportunity to come back out here because at one stage I didn’t think that it was going to happen.

“I’m really thankful to the Australian Government for letting us in. I feel really honoured to be able to get back into the country.”

Register for the 2021 Coach Development Series
Scroll to top