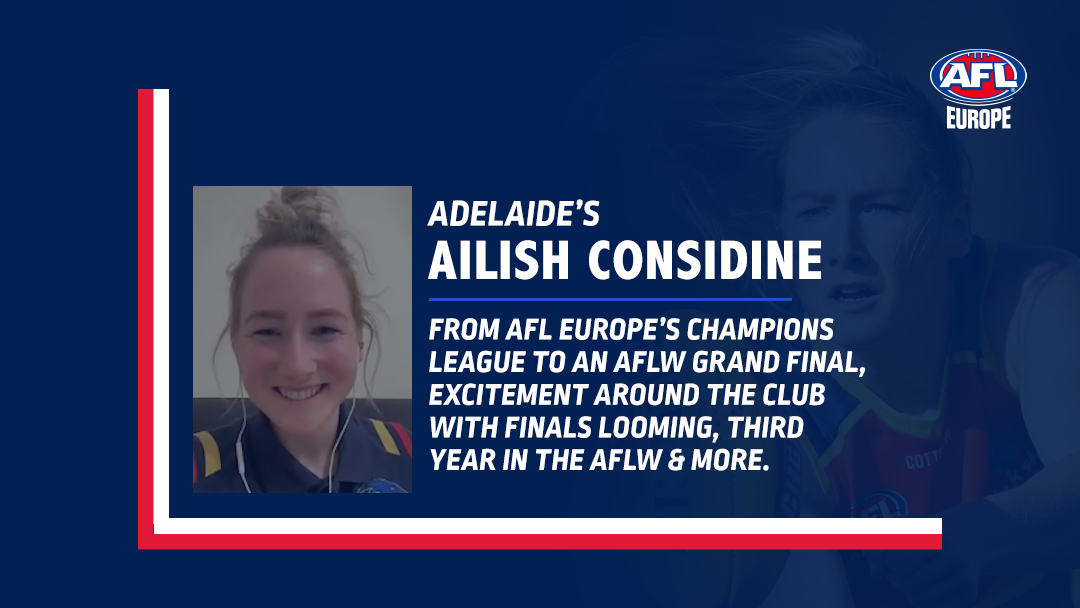 Tune into the eighth episode of Irish Down Under where we are joined by Ailish Considine from the Adelaide Crows.

Ailish’s journey into the AFLW is like none other. Within one year, Ailish had played in and won at AFL Europe’s Champions League with West Clare Waves, AFL Europe’s Euro Cup with the Irish Banshees, signed with the Crows, debuted and then went on to play in and win the 2019 AFLW grand final in front of 53,000 people.

After a remarkable first season in the league, Ailish has remained with the Crows and is currently in her third season.

Hear from Ailish as she chats to Jim & Mike about the building excitement around the club with finals looming, initially preparing for the AFLW through the AFL Europe competitions and tournaments, reflecting on the 2019 AFLW grand final and more.

0:32 – Crows progress in 2021 and guaranteeing themselves a spot in the finals.

2:51  – Fighting to earn her spot back in a competitive Crows outfit and preparing for games as an ’emergency’.

7:07 – Talking through the incident; post-injury and symptoms.

11:32 – Fifth year in the sport, third year in the league and feeling more comfortable out on the oval.

12:50 – First exposure to the sport in Ireland and representing Ireland in AFL Europe tournaments.

15:26 – A crazy few days in Melbourne and signing with the Crows.

26:12 – Catching up with the fellow Irish girls in the AFLW (where possible).

27:31 – Approaching finals and building excitement around the club.

Irish Down Under – Aisling McCarthy AFLW
Scroll to top