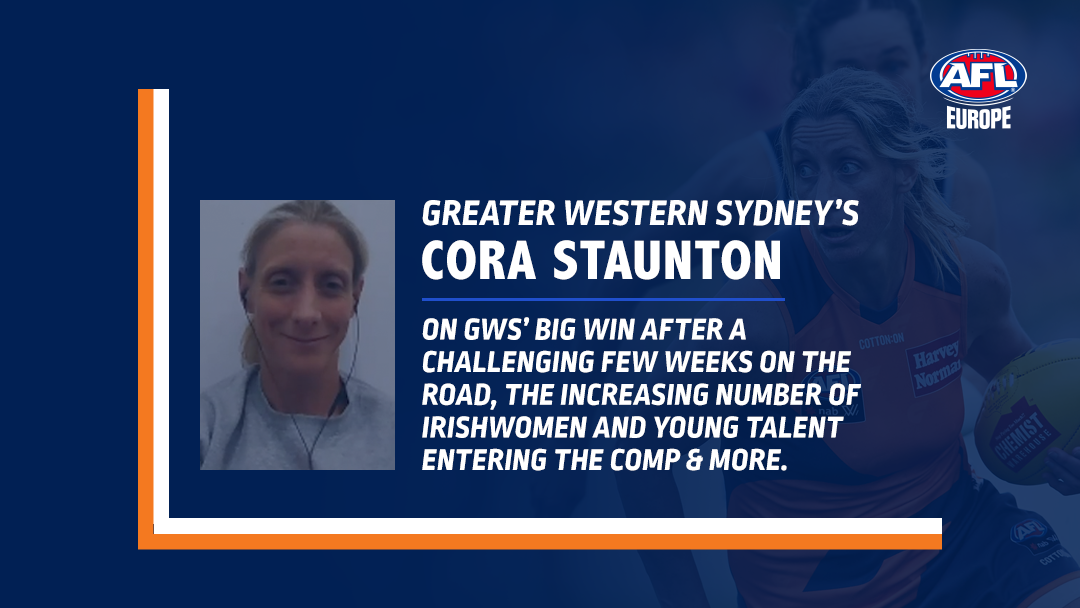 Episode three of Irish Down Under has now been released and this week we are very excited to be joined by Cora Staunton from the Greater Western Sydney Giants.

Cora and her Giants teammates have just picked up their first win of the 2021 season and are now finally settled back into Sydney, after a challenging few weeks on the road.

Hear from Cora as she chats to AFL Europe on that first win for the year, the increasing number of Irishwomen and young talent that has been entering the AFL Womens competition, as well as the impact head coach Alan McConnell has had on her AFLW career.

Watch the episode with Cora or listen to it on our podcast, below.

1:19 – Reflecting on a challenging few months since returning to Australia.

3:37 – Being on the road since the start of January and in a number of hubs.

5:56 – Cora speaking on fellow Irishwoman and GWS teammate Bird Stacks recovery and influence on the group.

7:41 – The increasing number of Irishwomen in the AFL Womens over the past few years and the growth of the sport in Ireland.

10:53 – The impact Giants Head Coach Alan McConnell has had on Cora’s AFLW career.

13:28 – Acting as a mentor to Alyce Parker and talking to the quality of the young talent coming through.

17:58 – Keeping the Australian Football skills up to scratch when back home in Ireland.

20:21 – The benefit of training with AFL Ireland Women’s before coming over to Australia.

21:55 – Finally having the whole team back in Sydney and looking forward to the rest of the 2021 season.