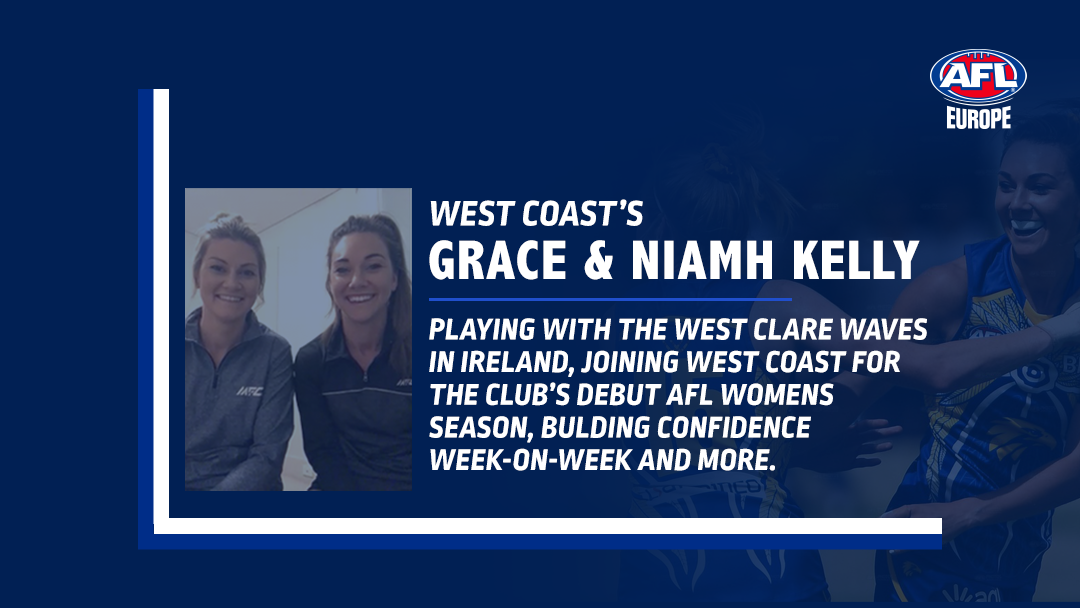 Just hours after their win over Geelong we were thrilled to be joined by sisters Grace & Niamh Kelly from the West Coast Eagles, for the seventh episode of Irish Down Under.

The pair signed contract extensions with the Eagles in August last year and have since been joined at the club by fellow Irishwoman Aisling McCarthy, as the trio experienced their first win together at West Coast just last weekend.

Grace & Niamh have been in outstanding form this season, regularly listed in the best afield as they continue to impress Eagles fans and all watching.

Hear from the two as they chat to Jim and Mike about their footy journey including playing for West Clare Waves in Ireland, signing with the West Coast Eagles in 2019 and building confidence week-on-week.

0:34 – Another Eagles victory and just two games to go!

2:31 – Improving each week and building on their knowledge of the sport.

5:01 – Life at the Eagles, top-class facilities and the unity between the men’s and women’s teams.

6:31 – Working through injuries and rehab.

7:42 – The photo of Niamh’s finger injury that circled the internet!

10:13 – Switching from the GAA to AFLW; getting used to the physicality and a different ball.

12:40 – Each signing contact extensions in August 2020 and what lies ahead for the two.

13:42 – Returning home and keeping busy through Ireland’s lockdown in 2020 including coaching sessions with Mike and AFL Ireland Women’s (when permitted).

16:42 – Receiving interest from AFLW clubs upon signing with West Coast and what attracted the sisters to the Eagles?

18:23 – Catching up with ‘cross-town rival’ and fellow Irishwoman Áine Tighe from Fremantle Dockers.

21:42 – Hearing from people back home in Ireland and the growing number of people tuning into the sport.

22:41 – Plans post-season including travel in Western Australia, flying back home and playing in the GAA.

Irish Down Under – Ailish Considine AFLW
Scroll to top