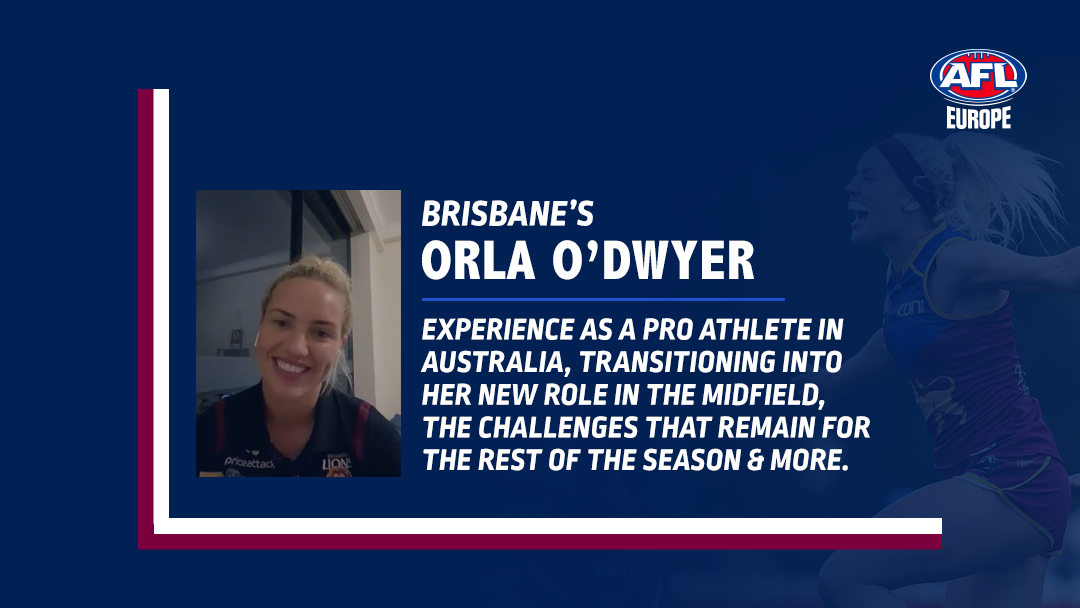 For the sixth episode of Irish Down Under we are pleased to be joined by Brisbane Lions star, Orla O’Dwyer.

Orla is in her second season with the Lions who are currently finals bound and sitting third on the ladder!

Hear from Orla as she chats to Jim & Mike on her experience as a pro athlete in Australia, moving into a new role in the midfield, tying in her GAA Camogie skills into Australian footy and much, much more.

0:35 – Experience in the AFLW and playing in her second season.

1:48  – Speaking on the Lions’ sisterhood and the benefits of rolling into a new season with a similar group to the previous year.

3:10 – Arriving in Australia in November for pre-season.

5:00 – Tying in her GAA Camogie skills into Australian footy.

6:04 – Transitioning into a new role for the Lions.

8:08 – Working with Mike and Lions Head Coach Craig Starcevich in the off-season and how she finds the midfield.

9:38 – Orla’s personal development and growing knowledge of the sport.

11:06 – Putting up career-best numbers for tackles and working on her physicality.

14:29 – The growth of interest and exposure of Australian football in Ireland.

15:48 – Moving to and playing for Brisbane women’s as the club’s only Irishwoman.

17:12 – Downtime in Brisbane, getting to know the area and getting used to brunch.

18:35 – Orla’s experience as a professional athlete in Australia.

19:39 – Being born in Sydney and having a dual Irish/Australian citizenship.

Irish Down Under – Sarah Rowe AFLW