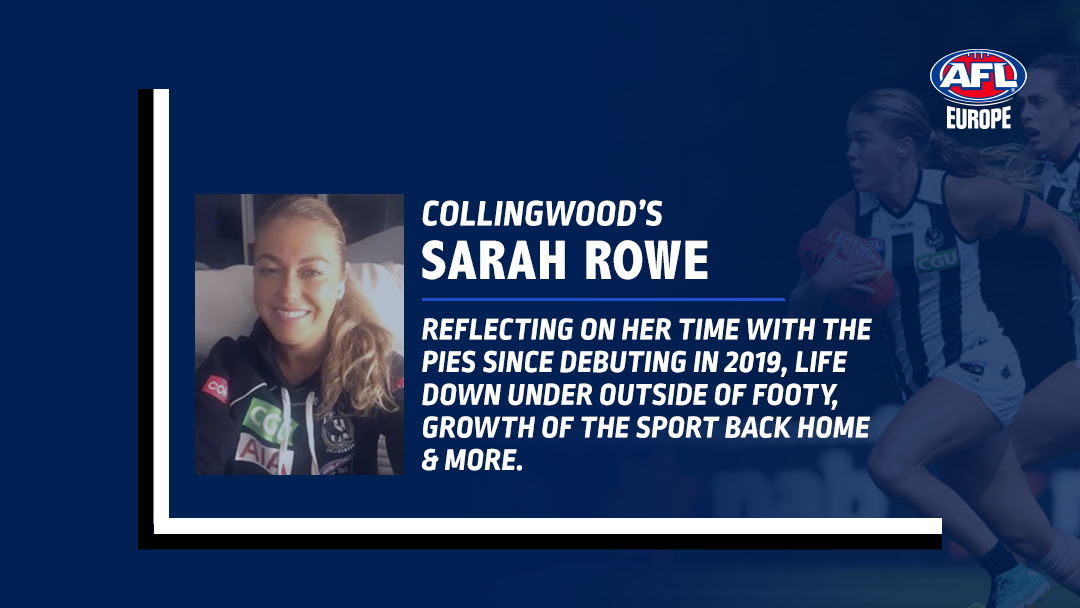 Sarah Rowe from the Collingwood Magpies joins AFL Europe as this week’s guest on Irish Down Under.

We’ve just entered the second half of the 2021 AFL Women’s season and the Magpies are sitting on top of the ladder, undefeated!

Hear from Sarah as she reflects on her time with the Pies and the improvement she has seen in the group since her debut in 2019, speaks on life in Australia outside of footy and the growth of the sport back home in Ireland.

0:27 – Sarah gives us the latest on her shoulder injury and a possible return date.

1:30 – The gradual improvement of the Collingwood women’s team over the past few seasons.

5:36 – Rotating through the forward and midfield and needing to be versatile.

6:41 – Living and playing with Irish pal Ash Sheridan and speaking to her outstanding form this season.

8:01 – Receiving support from back home as Australian football continues to grow in Ireland.

9:27 – Sarah reflecting on the challenges of her first year in the league and making the move over from Ireland.

12:20 – Life outside of footy in Australia including gelato, going to the beach and her studies.

15:55 – Sacrifices involved in moving Down Under to become a professional athlete.

17:31 – Playing in the AFLW and GAA all year round and switching to-and-fro.

20:36 – Sarah on the pathways into the AFLW for younger girls and giving advice for others who are working towards playing footy in Australia.

22:38 – The main physicality differences between AFLW and the GAA.

Irish Down Under – Orla O’Dwyer AFLW
Scroll to top