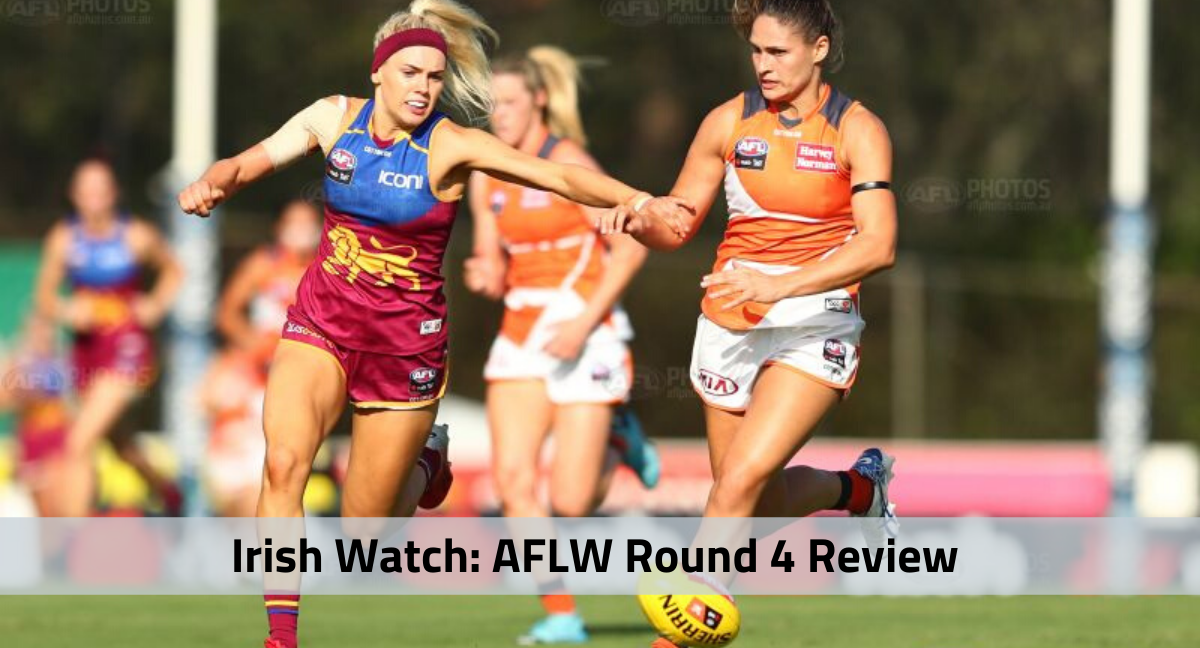 It was another big weekend of action in the AFLW with a number of storylines developing across all 7 matches.

Whether it be the Eagles upsetting the Western Bulldogs to claim their first ever AFLW win, or the Brisbane Lions pulling ahead as clear ladder leaders in conference A, fans were definitely treated to a terrific round of football.

As for our Irish girls it was another week of growth, with many looking more comfortable out on the field and putting in game changing performances for their respective sides.

It was a big night not only for football but for the broader Australian community on Friday night as Melbourne and Collingwood took part in the bushfire relief double header as a curtain raiser for the much anticipated state of origin match.

A crunch match up in terms of ladder positioning, it was always going to be a fiery game as two of Victoria’s biggest clubs went at it on the hallowed turf of Marvel Stadium.

With so much on the line, it would be the Demons that came up trumps as the girls dug in hard and put together their best four quarter performance of the year.

Leading from start to finish, Melbourne were fantastic around the contest all night and produced a warning to the rest of the competition that come finals time they will certainly be a player.

Although on the losing side, Sarah Rowe continued her fantastic start to the season as she used her endurance and skill to push forward and have an impact in front of goal as well as around the ball.

One of the competition’s breakout players, Rowe’s ability to read the play has been nothing short of outstanding as she constantly found herself in the right positions and took her chances in front of the sticks.

Finishing with 12 disposals, 5 marks, 2 tackles and 2 goals, it was a well rounded performance from the Irishwoman who was one of very few bright spots on a poor night for Collingwood. 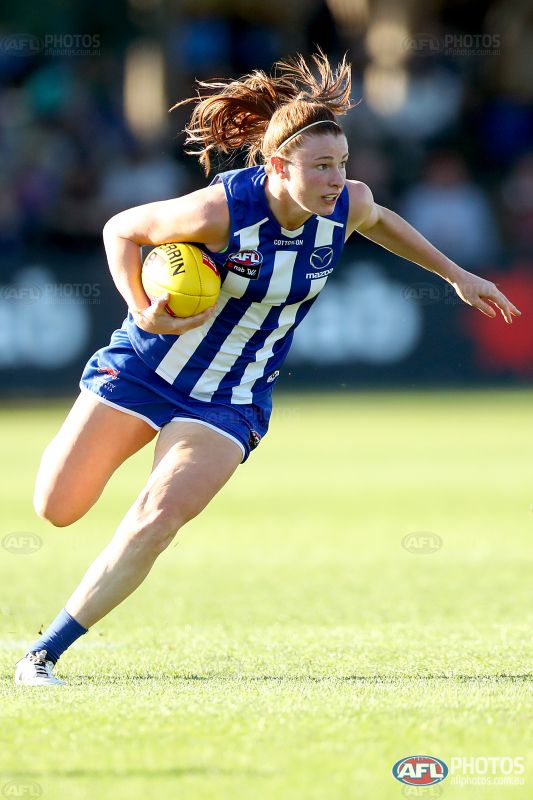 North Melbourne continued their rise up the Conference A standings with a tight win over the inexperienced Gold Coast Suns at their traditional Arden Street home.

A see sawing affair for most of the first three quarters, the class and experience of the Kangaroos would eventually reign supreme as they got on top in the last and pulled away with a crucial 13 point win.

After an indifferent start to her AFLW journey, North Melbourne’s Aileen Gilroy put together the best performance of her brief career on Saturday afternoon.

Playing across half back, Gilroy would use her speed to get into dangerous positions and damage the Suns with her excellent skills.

Clearly adapting more and more to the game, Gilroy would put it all together collecting 14 disposals, four marks and two tackles going at a respectable 66% disposal efficiency.

As North Melbourne inch closer to the finals they will be buoyed by the improvement of Gilroy as she has the potential to be a real difference maker for this team moving forward.

After a harsh opening three weeks to their AFLW existence the West Coast Eagles would finally break through with a gutsy four point win upset win over the Western Bulldogs in front of their home fans on Saturday night. 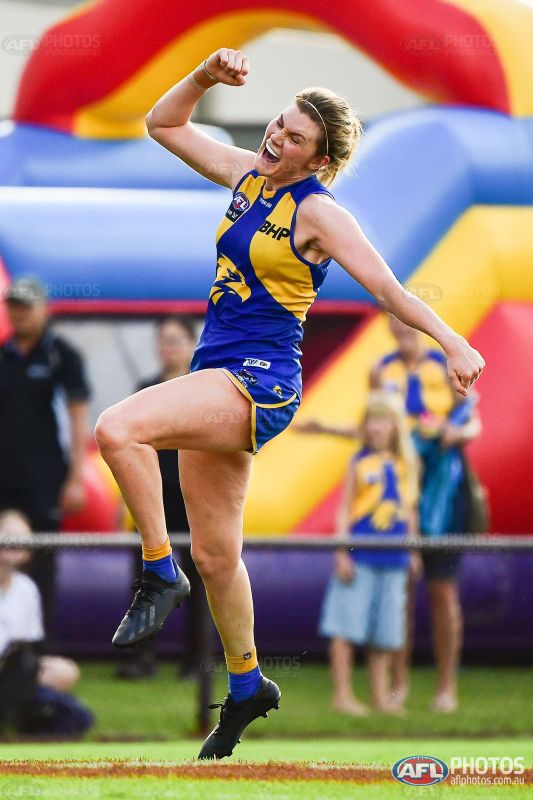 It was a roller coaster ride from the outset at Leederville Oval as after getting off to a nice start the Eagles were made to sweat as the Bulldogs came roaring back into the contest.

With Isabel Huntington closing the lead to within a kick mid way through the final term, many thought the young eagles would run out of gas as the experienced Bulldogs began kicking into gear.

However, West Coast would hold firm and defend for their lives as they managed to thwart all opposition attacks and come away with a memorable victory.

Irishwomen Grace and Niamh Kelly would be stand out contributors for the Eagles all night, as they used their endurance and speed to create space on the wings and win the ball at crucial times.

Picking up 14 and 16 disposals respectively, the pair could have been mistaken for 100 game veterans as they showed excellent composure in the tense final minutes and really led from the front with their attack on the ball.

An excellent sign for West Coast as they look to build an exciting young team over the next few seasons. 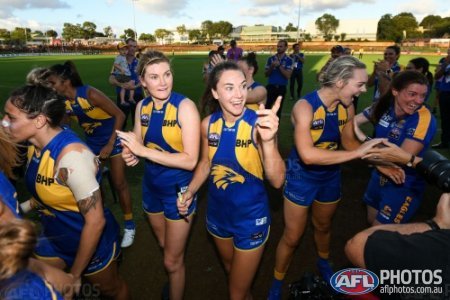 It would be sweet Grand Final revenge for Carlton on Sunday afternoon as they came from behind to claim a season defining victory against Adelaide at Hisense Stadium.

After a cinderella start for the Crows which saw returning Rhiannon Metcalfe kick the opening goal after two years out of the game, Daniel Harford’s girls dug deep and wrestled back control of the game just before half time.

They would then open it up after the main break as they simply ran the reigning premiers off their feet to claim an 8 point win.

Despite not coming away with the points the Crows will be happy with Ailish Considine’s return to the lineup as she really upped her forward pressure and reaped the rewards from hard work.

Although only registering 7 disposals, her work inside Adelaide’s forward 50 certainly did not go unnoticed as he constantly harassed the Blues defenders and snapped an incredibly difficult goal in the second quarter.

Brisbane jumped up to the top of Conference A with a comprehensive 28 point win over GWS on Sunday afternoon.

After letting the game slip late against the Suns last week, the Lions would make sure they would gain the full reward from their hard work putting in a clinical four quarter performance.

Leading from start to finish, the Lions put GWS to the sword all afternoon and showed themselves and genuine contenders come the pointy end of the season.

Livewire irishwoman Orla O’Dwyer was again superb up forward for the Lions as she used her athleticism and speed to make herself a constant threat to the Giants defenders.

Although she didn’t hit the scoreboard, O’Dwyer was consistently getting herself into dangerous positions and was crucial in setting up much of Brisbane’s attacking play.

Picking up 11 disposals she showed herself to be a valuable asset to the Lions forward line moving forward, with her team first approach a particular highlight of her game.